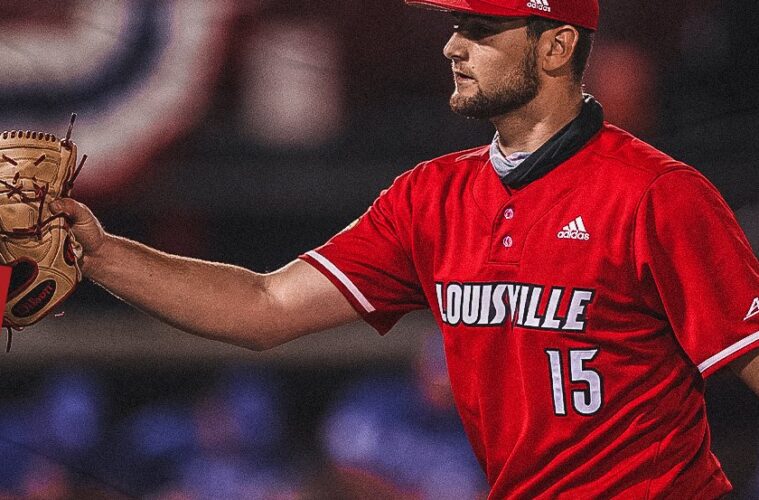 The Battle of the Bluegrass was an offensive battle through the first three innings as No. 7 Louisville lost their fourth midweek game of the season, 11-7.

Tate Kuehner got the start on the mound for Louisville and would have a rather short day. He gave up one hit in the first inning, but two in the second inning and one of those two was a three-run homer that gave Kentucky a 3-0 lead early. Luckily, the Louisville offense was able to answer in the bottom of the second with a few runs of their own. Trey Leonard hit a double to send Masterman home, Lucas Dunn then singled to centerfield to advance Leonard across home plate, and Levi Usher had a sac fly giving the Cards their third run and tying the game. Jack Perkins came into the game for the Cards in the top of the third inning, taking Kuehner’s place on the mound. He walked three batters before giving up a three-run double and allowing Kentucky to take a 6-3 lead. It would be Evan Webster on the mound next who immediately gave up a 2 run RBI before getting out of the inning. The Cards would answer again in the bottom of the third as Binelas hit a two-run homerun to left field and helping his team close in on the gap.

There was finally a break in offense during the fourth inning as both teams came up scoreless, keeping the game at 8-5 in Kentucky’s favor. The Cats extended their lead in the top of the fifth adding two runs on two hits and the Cards were faced with another scoreless inning in the bottom. Robinson gave up two hits in the top of the sixth inning, but Kentucky came up short and added nothing more to their lead. When Henry Davis stepped to the plate in the bottom of the sixth there were two outs on the board for Louisville. He wasn’t going to be the third out for the Cards in this inning and added another homerun to his stat line for the season. Louisville was slowly chipping away at the Cats lead. Both teams would come up scoreless in the seventh inning and time was running out for Louisville to rally. The top of the eighth inning added another run to the Kentucky lead and Louisville went down in order during the bottom of the eighth. The Cards found themselves with just one more chance on offense and defense and went into the ninth inning trailing 11-6. Carter Lohman tossed a scoreless inning for the Cards, but they would need six runs in the bottom of the ninth to secure the win. Henry Davis led off with a single to left field followed by a strikeout from Alex Binelas. Masterman then delivered a single of his own giving the Cards runners on first and second. Trey Leonard knocked a single to left field to easily send Henry Davis across home plate. Leonard was able to advance to second and Chris Seng to third on a throwing error forcing Kentucky to bring in their closer. Lucas Dunn got the second out of the inning with a line out and things came down to Christian Knapczyk at the plate. He struck out swinging on an 0-2 count putting the nail in the coffin for the Cardinals.

Louisville will host Florida State for a three-game series this weekend, starting on Friday.