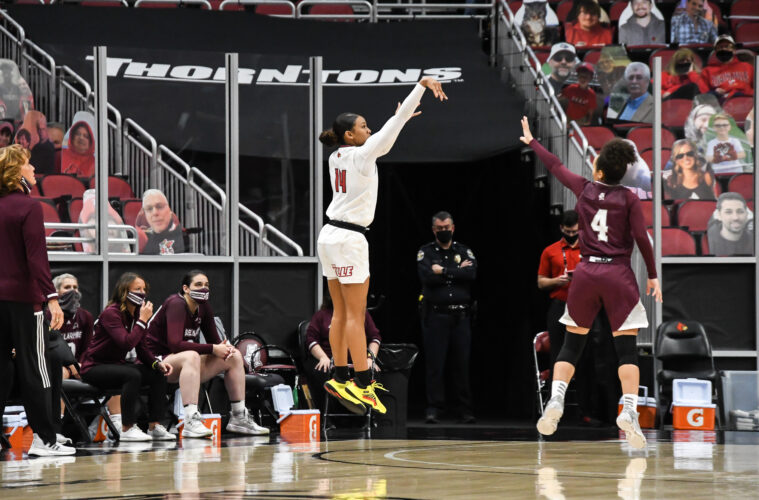 No. 2 Louisville Women’s Basketball Now 7-0 After Win Over Bellarmine University

This afternoon, Louisville played their second game in 24 hours as they hosted Bellarmine at the KFC Yum! Center. The first thing I want you all to know is that I am sorry for mentally judging everyone who tweeted about Louisville playing Boston College. It was me who was confused, I completely forgot that the men’s team was playing at the same time as the women’s team and for a very solid 2-3 minutes, I couldn’t figure out why everyone was tweeting about Boston College when we were very clearly playing Bellarmine…. My bad.

Olivia Cochran got the Cards on the board early in the first, but you could see the defensive woes slipping back in as they gave up a quick 5 points to Bellarmine. The offense made up for it when Kianna Smith hit her first 3-pointer of the day after going 0-6 from the three yesterday. Elizabeth Balogun was able to light a fire under the defense with 2 blocks in the first quarter. Dana Evans and Liz Dixon led the team in scoring during the first quarter with six points each.

The second quarter showed the strong arm of scoring for Jeff Walz and company. The Cards had 18 points coming off the bench and utilized their skills in the paint. Louisville kept excellent pressure on Bellarmine through the second quarter allowing just 9 points and recording 6 defensive rebounds. At the half, the Cards had recorded 27 bench points and 36 of their 52 points were in the paint. Louisville would go into halftime shooting 63.9% from the field and 80% from the free throw line.

Louisville’s shooting didn’t slow down much in the third quarter with 16 points in the paint and a 60% shooting percentage. The Cards went on a 9-0 run toward the end of the quarter and the defense remained strong only allowing 9 points. As far as complete players go, Olivia Cochran proved once again why she’s one of the best in a Cardinal uniform. With 5 points, 2 rebounds, 1 assist, 1 block, and 1 steal in the third quarter, she remains one of the biggest contributors on the court for Louisville.

The fourth quarter didn’t slow the hustle for the Cards. Merissah Russell put up 5 points and 2 rebounds while Mykasa Robinson had 2 points and 3 rebounds. Malea Williams saw some playing time today as well and even though her stat line was lacking, her hustle on the court was reassuring.

In a 97-46 victory, Louisville had 11 players contribute points with 6 of those players scoring double digits. Scoring was led by Olivia Cochran who tallied 15 points and Liz Dixon who tallied 14 on the day. The Cards finished the day with 64 points in the paint and 76.2% scoring.

In his post-game press conference, Coach Walz said it was nice to get back out there and he thought they played much better today. He noted that things will take some time and he doesn’t expect it to be completely fixed by Tuesday. The size advantage over Bellarmine was helpful for having so much positive play around the basket. Coach Walz did say that even though they are a good shooting team, they still need to improve on making three-pointers.

When asked about the offense, Coach Walz said he thought they were moving the ball much better today and they need to continue to make quick passes. He also stated that the conditioning of the team is still a work in progress. They are not anywhere close to being in the shape they were prior to the team shutdown. He said they would need to continue to work to get back to that point.

On Malea Williams, he stated that she played today because this is a free year of eligibility for players. He saw an opportunity to put her in the game, so he took advantage of that. He hopes to see her continue to improve because she does have a lot of raw talent.

Kianna Smith said during the post-game it is exciting to be back on their home floor and that the two weeks they had off seemed long. She also said that the team has super talented post players and thanked them for their hard work over the last month. Kianna did note that they’re focusing on UNC and emphasizing rebounding during that game.

Olivia Cochran said they knew they needed to score fast today and they fed off the energy of the guards. She stated that her and Liz Dixon play against each other every day and it helps them work well together on the court. She also said they feed off each others strengths to help win games.

The Cards will get back to ACC play on Tuesday, January 5th when they host UNC at the KFC Yum! Center for a 2:30 tip-off. The game will be streamed on ACCN. You can also listen to the game on 790KRD.