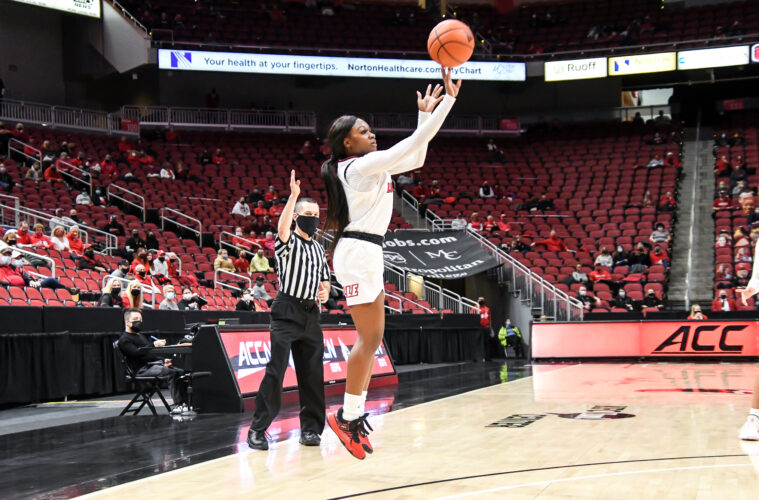 Florida State University was the last team to beat Louisville and it was clear the Cards came into today’s game with a chip on their shoulders. Backed by a strong defensive performance, the Louisville offense got on track to carry the team to an 84-56 victory over the Seminoles.

Halfway through the first quarter I could already hear Coach Walz in my head saying, “we’ve got to work on our three-point shooting.”. He has never shied away from criticisms within his own team and the first quarter proved that this team, does in fact need to work on several things, three-point shooting included. The Cards went 2-4 from the three in the first quarter and struggled with ball movement and turnovers early on. They did open the second quarter on an 8-3 run, picking up on the offensive end and defensive end of the ball. Kianna Smith, who suffered an ankle injury earlier this week, looked good as new showing Coach Walz and the rest of the world that her three-point shooting is simply fine. She went 3-4 from the three-point line in the first half and 4-5 from the field for 11 points, while also recording 2 rebounds and 3 assists. Hailey Van Lith was not quiet either, as she closed out the half by sinking a three-pointer at the buzzer. She was also 4-4 from the field with 3 rebounds and 2 assists. The team recorded 4 blocks in the first half and 2 came from Olivia Cochran, a player whose 3 first half rebounds all came on the defensive end. Louisville let Florida State play them close through the first quarter, but by halftime the Cards had pulled away for a 43-31 lead.

The third quarter left a lot to be desired from a defensive standpoint, but Hailey Van Lith came out to serve us on the offensive end. She tallied a couple of quick three-pointers and would help extend Louisville’s lead. They really pushed the pace through the fourth quarter, and I like to believe they were feeding off the crowd energy, which became more invested after news spread of a Stanford loss. Dana Evans had a career high 8 assists today, to go along with her 12 points. She was not the only one making noise on assists, Kianna Smith recorded 6 of her own this afternoon. The Cards had 38 rebounds today, 29 of which were defensive rebounds. At the end of the day, the team was 9-10 from the free-throw line, 54.2% from the field, and 47.8% from the three-point line. Kianna Smith led the team with 16 points, while Hailey Van Lith had 15 points and Olivia Cochran had 14 points. I cannot sit here and write this recap without mentioning Liz Dixon, who had a double-double today with 10 points and 10 rebounds.

During his post-game press conference, Coach Walz says the team had a pretty impressive performance today. He went on to say they made great passes and they were able to rebound the ball. Coach Walz gave a shout out to the team trainer who he says, did an incredible job getting Kianna ready to play today after she suffered an injury earlier this week. He said she did not practice much the past few days. When the Stanford loss was mentioned to Coach Walz, he made sure to reiterate that having a #1 ranking right now is something that might not matter in March, but it’s something they are proud of.

Louisville will take a few days off before hosting Syracuse on Thursday, January 21st. The game will tip-off at 9:00p.m. on ESPN2 and can also be heard on 790-AM WKRD.