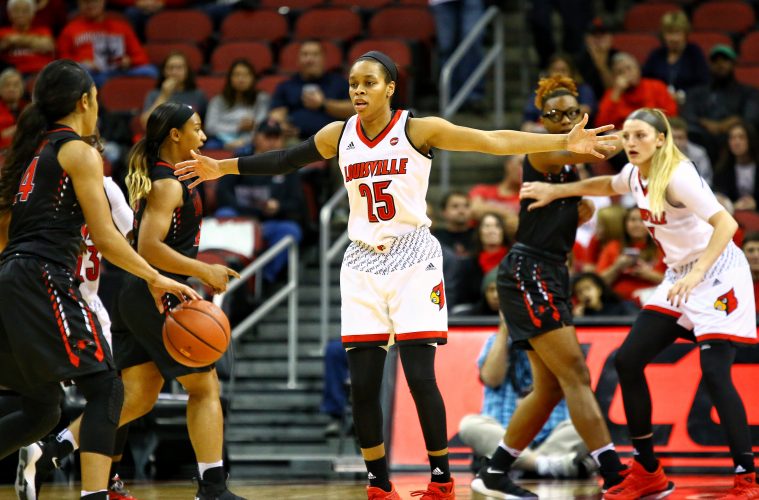 2-0.. it’s a good look on the Cards.  Especially after downing the #5 team in the country on their home floor, lead by the stellar performance of Junior guard, Asia Durr.  She scored a school-record 47 points and the #9 Louisville women’s basketball downed THE #5 Ohio State Buckeyes, 95-90, in overtime on Sunday afternoon.

With the win, the Cards move to 2-0 on the young season, while the Buckeyes fall to 1-1.

“I was just thrilled with our effort, I thought our team did a great job of knowing that Asia was on. We set some great ball screens, we executed our sets, which allowed Asia to come off and get good shots,” said head coach Jeff Walz. “It was a great women’s basketball game on national television.”

Louisville led the majority of the way, but Ohio State made a late spurt to force overtime.

Durr’s seasoned experience, and she might agree, her training in Colorado Springs with Team USA with the nation’s top talent and extreme elevated exercise, really shined in the extra period. She knocked down 3-of-4 shots and 6-of-6 free throws for 13 of the Cards’ 15 overtime points to lead Louisville to victory.

Durr’s 47 points surpassed the previous school record of 43, set by Angel McCoughtry in 2001 against Providence.  She finished the game 16-of-29 from the floor, 9-of-15 from three-point range and 6-of-6 from the free throw line. Her nine three-pointers tied the school record, set by Shoni Schimmel against Memphis in 2014.  She added six rebounds and two assists, while playing the end of regulation through overtime with four fouls.

Senior, Myisha Hines-Allen finished with 15 points and 14 rebounds for her first double-double of the season and the 30th of her career, which ranks third all-time in school history.

The victory marks Louisville’s first win over a top five team since they downed No. 1 Baylor in the Sweet 16 in 2013.

Louisville returns to play in the

Women’s NIT when they host Toledo on