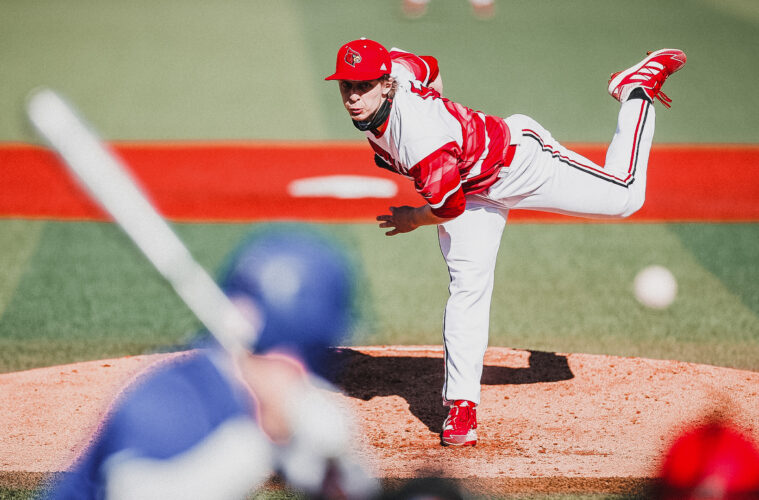 No. 1 Louisville Defeated By Morehead State, 5-2

Luke Seed got the start for Louisville today and had a few nerves to work through in the first inning. He faced four batters for 21 pitches before the Eagles would get their third out. As for the Cards, Luke Brown and Alex Binelas were both thrown out at first, while Henry Davis drew the four pitch walk. Levi Usher got the team’s first hit of the game with a single that would advance Davis to scoring position. A balk from Morehead then advanced Louisville’s runners to second and third with two outs. Cam Masterman would find himself thrown out at first and the Cards came out of the first inning with nothing.

Seed came to the mound at the top of the second and struck out the first two batters he faced before an HBP with the third batter. He was able to strikeout the next batter, marking his fourth K of the game and second scoreless inning. Dunn led off for Louisville in the bottom of the second and was walked. Dalton Rushing popped one up to the shortstop for the first out of the inning and Cooper Bowman drew the walk to put a runner in scoring position for the Cards. Tim Borden sent one to left field for out number two right before Morehead made their first pitching change of the day. Lucas Brown struck out at the plate and Louisville was still stuck in a scoreless game going into the third inning.

The top of the third inning was quick due to Seed working a 1-2-3 inning to put the Cards back on offense. Binelas struck out looking, continuing his bad luck at the plate this season, followed by Henry Davis with a single to centerfield. He would be out at second after a fielder’s choice from Levi Usher. Cameron Masterman hit a double to left center, putting two runners in scoring position for the Cards in the bottom of the third. A four pitch walk to Lucas Dunn would load the bases for Louisville with two outs on the board before Dalton Rushing would ground out at first for out number three.

Louisville gave up just one hit in the top of the fourth inning through four batters faced. Luke Seed would finish his day with 7 strikeouts through four innings pitched. Bowman and Borden both stepped to the plate and quickly racked up two outs for the Cards. Luke Brown doubled to the left field line and would advance to third on a balk. Alex Binelas drew a walk for the Cards, but then was called out at second base after a fielder’s choice from Henry Davis.

Amburgey made an appearance on the mound to start the fifth inning, but after walking one batter and the Eagle’s tallying another HBP, Webster came into the game to take his place. He was able to get the Cards out of the inning without allowing any runs. Louisville finally saw something go their way in the bottom of the fifth when Rushing grounded out to second and sent Leondard home to get the first run of the day for either team. Silkwood stepped to the mound in the sixth inning but only faced three batters, walking one and giving up a single to another. He was replaced by Barrett who helped prevent the Eagles from getting any runs through the top of the sixth. Louisville would get two hits in the bottom of the sixth, but also leave two runners on base, which was the trend of the day.

Barrett retired the side in order during the top of the seventh inning, giving the Louisville offense a chance to extend their lead. Things were not looking good when Leonard was picked off at first base and Dunn struck out swinging, but Rushing was HBP and Seng, who was pinch running for Rushing, stole second. Bowman was walked and Borden was HBP giving the Cards a bases loaded situation with two outs. Luke Brown would step to the plate next and draw a walk, allowing Louisville to add another run to their lead.

Everything went downhill for Louisville in the top of the eighth inning when Lohman and Perkins gave up a combined 4 hits for 5 runs. Lohman tallied 4 errors and had a 27.00 ERA for the day after facing just 5 batters. Things were not going so great for the offense in the bottom of the eighth either. Henry Davis led off and hit a flyout to left field and Levi Usher then struck out looking. Luckily, Leonard was able to get a hit followed by a double from Dunn, but the Cards would come up short when Bianco struck out looking. Perkins was able to close out the top of the ninth inning without giving up any more runs to the Eagles. Things would end for the Cards in the bottom of the ninth when Bowman was walked but he and Brown would be left on base after Borden and Davis both struck out at the plate, and Binelas had a flyout to centerfield.

Aside from giving up 5 runs in one inning, Louisville left a total of 19 runners on base, which played a major factor in their midweek loss.

Louisville will head to Atlanta this weekend for what should be a weekend battle against No. 10 Georgia Tech. All three games will be shown on ACCNX. Barring any CoVid or weather-related issues, first pitch on Friday is scheduled for 4:00p.m… Saturday will be played at 2:00p.m. and Sunday will be a 3:00p.m. game.