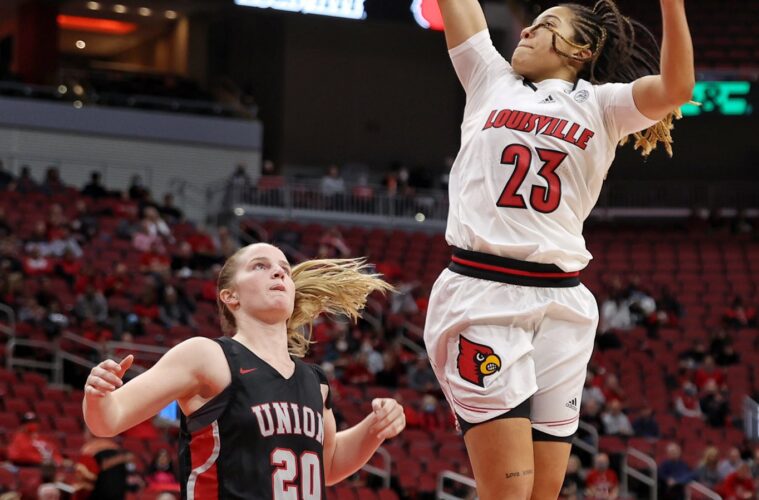 An explosive offense that was backed by a relentless defense led the Cardinals to a 106-32 victory over Union (TN) tonight. Let me start this off by stating yes, I know this is just an exhibition game and yes, I know the opponent was less than stellar. That did not stop this team from giving it all they had.

The first half was nothing short of a show with the Cards scoring 40 of their 61 first half points off UTN turnovers. While Liz Dixon led the team in scoring during the first half with 13 points, it’s worth noting that transfer Chelsie Hall made a statement as well. She was 5-5 in two quarters with 12 points, two of which came behind the three-point line, 1 rebound, 1 assist, and 2 steals. Hailey Van Lith was living up to expectations as well showing off her bulldog mentality recording 9 points and 3 rebounds through the first two quarters.

I couldn’t possibly put this article out into the world without mentioning Emily Engstler coming into the Yum! Center tonight and making her presence very well known. Some fans held a hate in their heart for her when she played for Syracuse, but that hate has turned to love after she recorded 6 rebounds tonight along with 8 points and 2 assists to go along with her 3 steals and 3 blocks. She has added a vital piece to the Jeff Walz puzzle that makes up this team.

I made it very well known that I’m basically the president of the Kianna Smith fan club and you should expect me to hold that title again this season. I did a guest spot on a podcast during the preseason and named her as someone we would see a lot of improvement from this year and someone who would be a shooter for us. She’s not afraid to take shots and I think she’s starting to be more selective with her shots which will be important for this team later in the season. She was 4-6 tonight with 9 points, 2 rebounds, and 2 assists.

By the end of the third quarter Louisville had four players in double digit scoring and five players with 3 or more rebounds. Jeff Walz and company didn’t slow down any in the fourth quarter and passed the 100-point mark with 2:35 left to play. The team totaled 24 rebounds in the second half putting their game total at 43 and proving their dominance. Liz Dixon was the shining start tonight. She led the team in scoring with 15 points and recorded 6 rebounds, 1 block, and 3 steals.

Coach Walz said the team played better than he anticipated based on how the team practiced. He said they continue to stress the number of turnovers in practice, and they’ll improve on that, but he was impressed with the game overall. On Liz Dixon he said when she gets the ball and makes a quick move, that’s when she’s the most effective. He was pleased with her and pleased with the way Olivia played on defense tonight. Walz said the game against Arizona next week is going to be a really, really good game noting that they reloaded this season and are a great team.

The Cards will head to Sioux Falls on November 12th to open the regular season against pre-season #15 Arizona. The game will tip-off at 4:30 EST.