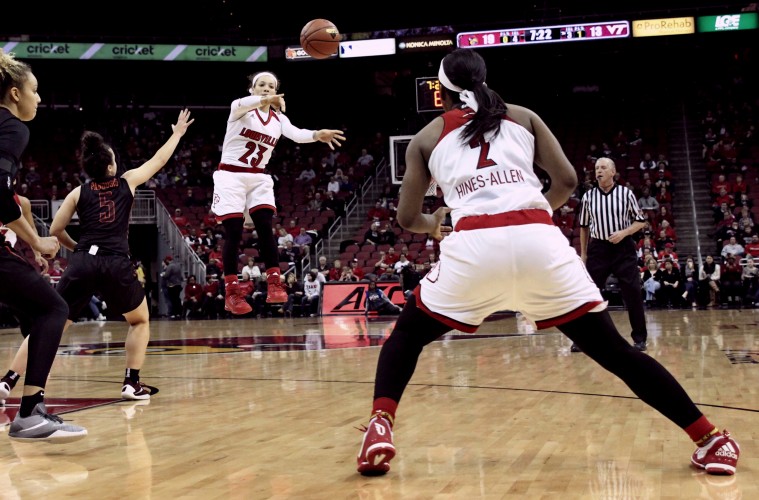 The University of Louisville women’s basketball team squares off against No. 18/16 Duke on Sunday afternoon in the KFC Yum! Center at 1 p.m.

Louisville (11-5, 3-0 ACC) earned its third-consecutive win to begin conference play with a 56-45 victory over Virginia Tech on Thursday night. The Cardinals’ defense limited Virginia Tech to just 37.5 percent shooting from the field, allowing the Hokies just five points in the second quarter. Louisville also forced 21 turnovers in the win.

Myisha Hines-Allen scored a game-high 18 points to go along with 10 rebounds for her fourth double-double on the season. Briahanna Jackson had 13 points, reaching 1,000 for her career in the game, to go with three steals, and three rebounds. Cortnee Walton finished with four points and a game-high 11 rebounds, her fifth time this year with double-digit boards.

Hines-Allen is pacing the Cardinals in scoring (15.5) and rebounding (7.9) and connecting on 51.9 percent of her shots. Jackson is second on the team in scoring at 14.5 per contest, while collecting a team-high 44 steals. Moore rounds out the top three scorers at 13.9 per contest to go with 77 assists, the most on the team.

Duke’s defense held Wake Forest to just 37.5 percent shooting in the second half and forced 23 turnovers in the game. The Blue Devils shot 53.8 percent from the field for the game, connecting on 10-of-18 (55.6 percent) 3-point field goal attempts.

Duke leads the series 2-1 over the Cardinals, winning last year’s matchup in Durham. This season’s meeting marks the first between the two programs in Louisville.

The two teams faced off on Feb. 2 last year in Cameron Indoor Stadium in Durham, N.C., where Duke earned a 66-58 victory. The Blue Devils held Louisville to just 35.4 percent shooting from the field. Elizabeth Williams had five of the Blue Devils’ 11 blocks in the game. Sara Hammond scored 17 points and grabbed eight rebounds for the Cardinals.