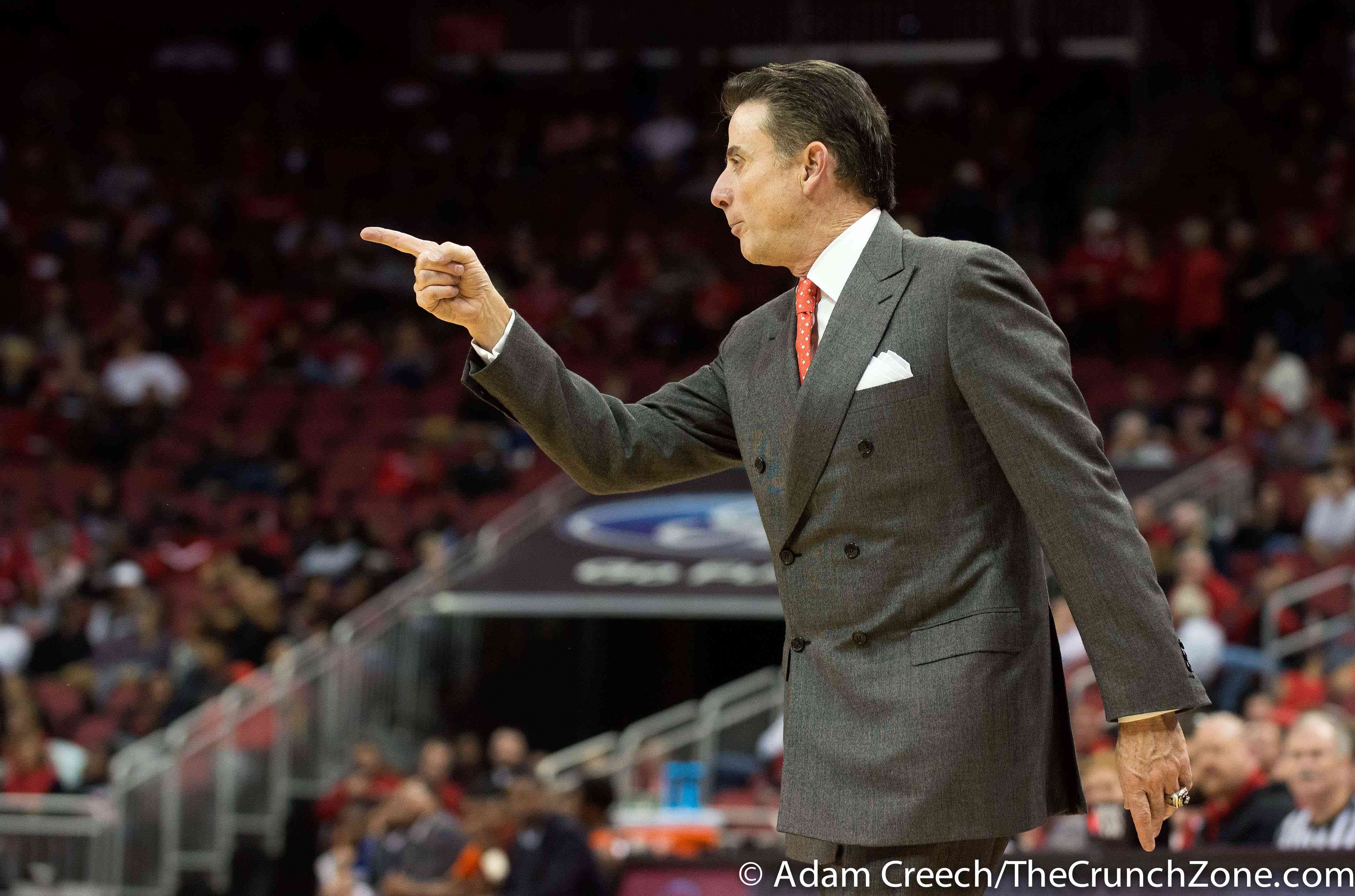 Kentucky has had its way in this series of late with the 2012 Final Four & the 2014 Sweet 16 ending Louisville’s season in the NCAA Tournament.  The stakes aren’t as high this Saturday in Lexington, but bragging rights are on the line and dialysis clinics across the Commonwealth are on notice.

The Cards (and everyone else) haven’t fared very well in Rupp Arena over the years.  On Saturday Louisville brings a team with more experience & more consistency and that might be enough to wrestle a win away from the Wildcats.  In this game, Damion Lee & Trey Lewis are the difference for the Cards bringing a wealth of experience a senior hunger to the contest.  Lewis has been on fire lately and Damion Lee has shown to be the team’s best player.  Ray Spalding is due for a breakout game and Rupp Arena vs. the Wildcats is the perfect setting.  Overall Louisville shoots the ball better than the Cats and don’t rely as much as getting into the lane for points.  Kentucky may get some free throw opportunities early, but we think they won’t get nearly enough and will fall to the Cards.

UK & UofL match-up pretty well in the backcourt.  Both teams derive a large portion of their scoring from the backcourt and neither team is particularly deep in the 1-3 spots.

Quentin has a size advantage over Tyler by 4 inches, but there is a stark contrast in style here.  Q is unassuming, quiet and can deceptively put together a top performance.  Ulis is the opposite and is tough, vocal and UK gets a great deal of leadership from its point guard.  Snider just isn’t that type of guy and will have his hands full on both sides of the floor with Ulis.

The best thing UofL can do with Ulis is to try and limit his passing and funnel more jump shots for Tyler.  The Cards have struggled at allowing penetration so far this year and have been bailed out with shot blocking and help defense….. vs. Ulis he’ll make the correct pass to the postman or happily will go to the line for free throws.

Quentin Snider really doesn’t force anything.  He moves the ball and takes what the defense gives him.  Having a size advantage doesn’t play much of a role here unless Snider finds himself in a late shot clock situation where Q uses his runner in the lane.  Ulis can not come down to help off the ball because Snider (and Lewis & Lee as well) all shoot the 3 at a high rate.

It’s hard to say who has the edge here because much of Kentucky’s offense comes at the discretion of Tyler, whereas Q allows the game to come to him.  Defensively I’d say Ulis has the edge of Quentin, whereas Snider is the better shooter.  Overall this is a very interesting match-up to watch.

Trey Lewis is a veteran player with an outstanding feel for the game and a reliable shot……he’s also been on fire lately.  Isaiah Briscoe is a promising young player who hasn’t quite yet fully grasped the scope of his ability, but the talent is most certainly there.  Once Isaiah harnesses the talent, the sky is the limit.  But for now, we are playing a game on Saturday.

Briscoe was recruited heavily by Rick Pitino & UofL and chose UK.  Isaiah has a slight size advantage over Trey Lewis and will use that to attempt to drive the lane to get layups and assists.  Briscoe’s biggest weakness is that he just isn’t a great shooter from the field or from the foul line and Trey Lewis (and the rest of the Cards) would do well to note that and not allow Isaiah to beat defenders off the dribble.

Trey Lewis on the other hand really can shoot from the floor & the foul line and does do a little bit of everything.  Also (like Quentin Snider) Trey doesn’t really force anything.  Lewis’ 3 point shot has come into focus after a slow first 4 games, is a very good ball handler and has been an adequate defender.  The biggest flaw for Lewis is getting beat off the dribble which is a staple of Isaiah Bricoe’s game.  If that continues Louisville’s bigs will need to decide whether it is worth burning a foul (for a low percentage FT shooter) or to attempt to just play defense.

This is a match-up of youth vs. experience and the game will just have to play out.  On paper I’d give the edge to Trey Lewis because of his shooting ability but I’d listen to arguments about that sided with Briscoe’s rebounding & overall potential being the deciding factor.

Another well-matched experience vs. youth battle in this game. Both players can provide A LOT of scoring and both Damion Lee & Jamal Murray score consistently for Louisville & Kentucky.  Overall though, it appears that Lee is a touch better than Murray but the margin is small.  Additionally Lee’s overall numbers have been down the last 3 games from what we observed to start the year and Murray is coming off his best performance to date.  Trends like that shouldn’t be ignored.

This match-up is going to be a battle and overall Damion & Jamal will most likely neutralize each other’s affect on the game. HOWEVER, if the game is close these two players are the ones to watch in critical situations OR if one player gets extremely hot the game might be hard to swing the other way.  We also need to monitor the health of Damion Lee’s heel that has been bothering him, it hasn’t been a huge issue in a GAME thus far but his overall health is a factor going against a top scorer like Jamal Murray.  This one will be FUN!

The Cards have the stronger statistical bench in the backcourt.  Stats don’t always measure out though as Dominique Hawkins is an outstanding defender when he wants to be.  Additionally Deng Adel began his year as a starter but his true value is measured on the defensive end along with his ability to drive the lane.

Donovan Mitchell really pushes the scales into the favor of Louisville in terms of bench backcourt because he provides the most overall value and Louisville doesn’t really lose much when he enters.  It is hard to tell what Deng Adel will bring to the Cards in this game coming off of his knee injury, but if he can keep Jamal Murray occupied for a stretch and cause him problems that is a big time PLUS for the Cards as well.

UK & UofL match-up pretty well in the frontcourt.  Both teams use subs to supplement the overall performance and with both teams, defense & rebounding is at a premium at the 4 & 5 spots.

This match-up is the inverse of what we saw with Louisville’s veterans in the backcourt in Trey Lewis & Damion Lee vs. Kentucky’s youth in Isaiah Briscoe & Jamal Murray.  Ray Spalding played just 6 minutes vs. Michigan State and made little impact, however, Ray’s role has significantly increased since that time.  Alex Poythress is a vet, he’s played in this game more than anyone that will suit up on Saturday.

Spalding has MAJOR potential and Saturday’s game will be his first extended action vs. a high major opponent.  Spalding has a unique ability to move without the basketball and find space near the rim.  Ray is also a defensive dynamo at times causing a major disruption to the passing lanes and can alter and block shots.

Poythress is thicker than Spalding but not as long and hits a much higher Free Throw %.  Both rebound at the comparable rate (per minute) while Spalding is much more active getting steals and blocks.  Overall, Poythress & Spalding will likely match-up for about half the game and it is possible that Calipari elects to use Marcus Lee vs. Spalding (Marcus Lee could easily be the starter, we’ll get to him in a minute in the bench section) and could match-up Poythress vs. Jaylen Johnson (more on him in a bit too).

I’d give the edge here to Poythress based on experience, but there is no reason why Ray Spalding can’t also have a big game.

There has been much hype around Skal Labissiere and lately a lot of that hype has been tamed by some of his recent play, particularly against teams from the Power 5.  Chinanu Onuaku was slowed with foul trouble vs. Michigan State & St. Louis both of which posed the toughest challenge to Nanu thus far in 2015-16.  Skal also has struggled with foul trouble in 4 of 11 games this season.

Onuaku is a very intelligent basketball player and sees the pass extremely well.  Nanu has greatly improved his skill set in a year but has yet to really perform at a high level for an extended period of time on the floor vs. high major program this year.  Nanu is much stronger than Labissiere and has the experience factor of playing a year in the ACC (including 20 minutes in this game last year).  This is a huge game for Nanu as many draft experts are factoring him into their bottom half of the 1st round of the 2016 NBA Draft.

Skal has a great deal of talent as well but has been pushed around in the post and his lack of physical development (he’s a freshman) greatly impacts him against stronger players in the post as evidenced by his lack of rebounding in 2015-16.  Labissiere is much more of a threat to alter shots but it is alarming that Skal averages more fouls per game than Nanu given Nanu’s foul trouble.

Both teams are going to drive the lane and challenge these two bigs, so who is behind these two is just as important as Nanu and Skal themselves.  It is fairly clear here that Chiananu Onuaku has the edge over Skal statistically but there are still a lot of questions surrounding both players and a solid performance on Saturday could mold the rest of the conference schedule for either.

Losing Mangok Mathiang for Louisville is a tough blow.  Mangok’s experience, toughness and defense is a difference maker and allowed the Cardinal defense to execute a volume game plan with its frontcourt.  Now that plan has to be altered and players like Chinanu Onuaku must play a little more cautiously. Louisville did get a lift with the return of Anas Mahmoud vs. Utah Valley.  Mahmoud can play both power forward and Center for the Cards but is still not 100% after an ankle sprain.

It is inevitable that Rick Pitino will utilize Matz Stockman in relief at the Center spot vs. Kentucky and throughout the winter.  Prior to Mangok’s injury Matz had logged just 36 minutes for the Cards this season.  Stockman is a big body and moves well but if he appears vs. Kentucky it will be his 1st test against a high major program since a blow out loss vs. Virginia Tech last January.  How will Matz fare against Marcus Lee or Skal Labissiere?  Pitino is likely going to use Matz right before TV timeout whistles and if Nanu gets into foul trouble. But again Anas Mahmoud’s return is TREMENDOUS in giving Pitino options in the post.

Marcus Lee is a force off the bench (unless he starts as he has in 7 of 11 games in 2015, but not recently).  Lee has length and uses that to set himself apart from Jaylen Johnson to block shots and finish more efficiently around the rim.  Jaylen is crafty around the rim and is very under rated in his ability to defend and run the floor.  Derek Willis and Isaac Humphries also provide a large presence for Calipari as Willis is good for a few points a game and Humphries can play some defense in a pinch.

With the return of Anas Mahmoud (even if he can only go 6-7 minutes) the front court bench is a good match-up.  Marcus Lee is the best player of the bunch and could easily find himself in the starting line up to match Louisville’s length.