Wednesday Night was an important road game for the Cards.  6-1 in league play and coming home to face Virginia & North Carolina in a 3 day window (Saturday & Monday) it was important to come home riding a 4-game winning streak.  But there was also some strange stuff in the game.  Let’s get into the weirdness:

If you aren’t a sneaker head, Yeezy’s are a collaboration between Adidas & hip-hop artist Kanye West. Pitino wore a black version of the Yeezy Boost 350, which are currently sold-out retail for $200 and reportedly fit like a ‘second skin’.  Pitino wore the shoes with his suit as part of the Coaches for Cancer week.  Virginia Tech also wore black uniforms with Pink lettering and Marquette coach Buzz Williams was sporting pink sneakers, pink shirt, and tie.

Louisville’s Jaylen Johnson had a fantastic night with 11 points, 9 rebounds, 3 assists and a block in 29 minutes.  But Jaylen’s night really is summed up well outside of the box score.  He had two incredible dunks, one of which followed a scary moment where fans feared a broken/sprained wrist.  One the 2nd dunk Jaylen was fouled and was still nursing the wrist…..the result was an epic Free Throw miss that will be celebrated for a lifetime.

We’re glad Jaylen is OK and as one of the best guys to talk with in the locker room we know he’ll take the ribbing he is likely to receive in stride.

There were weird fouls on Chinanu Onuaku

Once the officials had decided that Onuaku had played enough and issued Nanu’s 5th foul, the Virginia Tech student section began counting his steps leaving the court.  Nanu obliged with what any child of the 80s knows as the Nintendo Power Pad Shuffle.

Does this happen often? pic.twitter.com/x18pIwlTXl

I don’t care if it didn’t count. pic.twitter.com/cykRaBQPyX

The Cards were RED HOT from Outside

It might be the best investment ever to purchase the goals in Blacksburg. The Cards shot 12-18 from beyond the arc.

Louisville hits 12 from downtown to get the win on the road. pic.twitter.com/0zUo4pxx1b 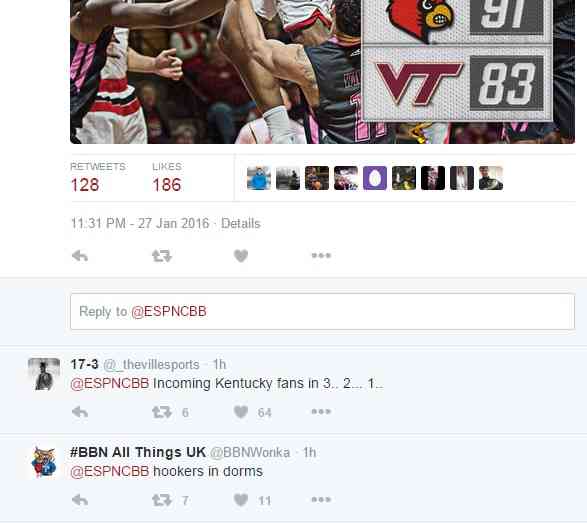