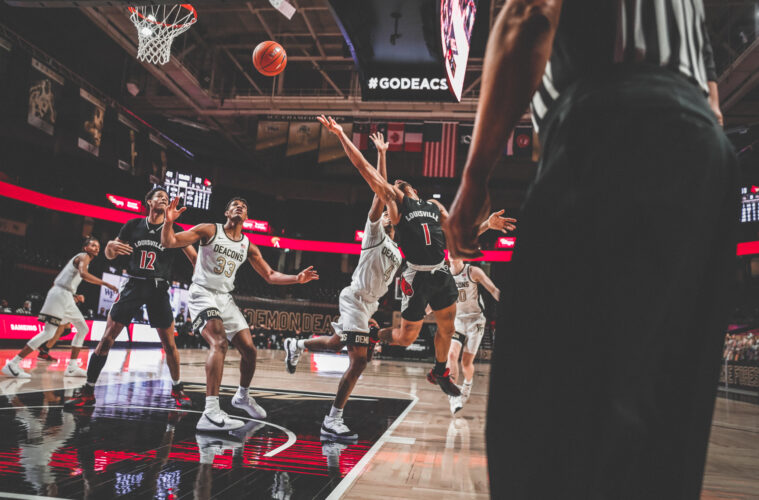 Louisville Basketball had 4 Cardinals cramp up tonight. Chris Mack said following the game, “We had 4 guys cramped, I don’t know what is in the water in Winston-Salem but we had to play some whacked lineups.”

Those whacked line-ups were also due to some foul trouble that UofL had to deal with. Jae’Lyn picked up two quick ones and eventually did foul out, David Johnson carried 4 fouls for much of the 2nd half, but despite all that Louisville was able to build a few comfortable leads and eventually won 77-65.

But it wasn’t an open and shut case. Louisville built a 14-point lead and saw Wake Forest draw close, and then UofL expanded its lead again and Wake Forest reeled UofL back in. With the ‘whacked lineups’ and the foul trouble there were a few worrisome moments but each time the Cards would respond with a run of its own to pull away.

The Cards got a huge game from Samuell Williamson with a 15 point and 11 rebound performance on just 7 shot attempts. And UofL got another double double from ‘magic man’ Carlik Jones who gave Louisville 23 points, 10 rebounds and 3 assists. David Johnson added 9 assists.

It was a comfortable win in the end, but it wasn’t nearly as comfortable as the final score would indicate. Carlik Jones was out with cramps, Dre Davis had the city of Louisville gasping with an injury that ended up being cramps. Hopefully the Cards can get hydrated as they travel to Miami this weekend to take on the Hurricanes Saturday night. On the road in the ACC it is imperative to not leave the barn door open for opponents to come back.