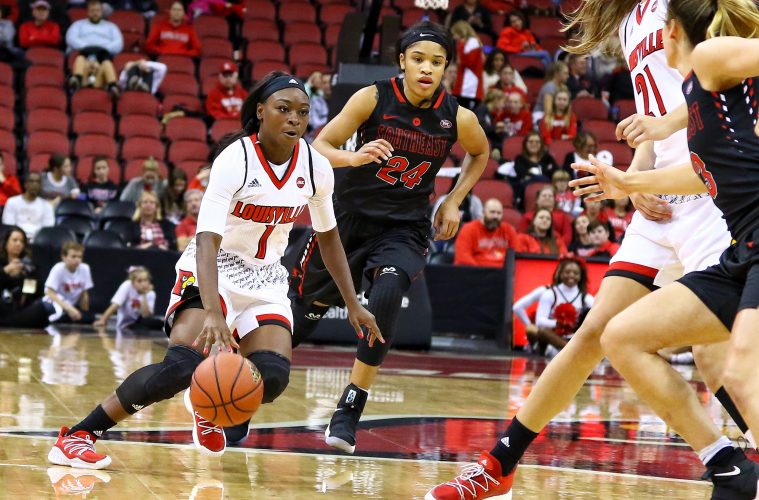 The Cards returned to the Yum! Center Tuesday night to greet the Toledo Rockets in front of 5,444 fans.  Senior forward, Myisha Hines-Allen recorded her second and consecutive double-double with 17 point, 10 rebounds.  Sophomore guard, Jazmine Jones joined her with the same 17&10.. but Myisha will have you know that she had 4 assists, one more than Jazzy (see post game video 😉 …. ‘if we’re keepin score’.)  Louisville won its third game of the season and remain undefeated.  The team has another quick turnaround when they welcome the #24 Michigan Wolverines to town for a Top 25 showdown.

The first quarter, three turnovers were committed in the first quarter by junior guard, Asia Durr and only a single missed shot attempt.  3 made threes by the Rockets and this quarter would have 3 lead changes as the Cards got their feet under their shots.    Jazzy Jones pulled down 6 rebounds, 3 assists and 4 points to start her night, 9 of the Cards 20 first quarter points were free throws made.

The second quarter, Asia Durr finally found her shot and nailed 2 three pointers within 40 seconds of the other.  She would finish with 14 points, 4 rebounds and only 1 assist.  But it took the Cards more than 3 minutes off the clock for the offense to find a basket.  The second period was definitely the Sydney Zambrotta show.  She scored all of her 5 points, 3 rebounds and 2 assists in this period.  She fouled out of the game with 6 minutes left in the game.  Her early foul trouble allowed Dana Evans to pick up some quality playing time in the final half, she played for 27 minutes.  Evans had an eventful total playing time, she finished 2-7 for 6 points but she also had 7 rebounds, 5 assists, 2 steals.. committed the second most fouls on the team with 4 and 5 turnovers.  Shes extremely quick and plays with a serious motor.  Fans are going to enjoy watching both Evans and Zambrotta over this season.

The lead was 43-25 heading into the halftime break.  That would be about as close at it would be the rest of the way.  Starters played a total of 195 minutes of the team’s thrilling OT win on Sunday… They played 105 minutes on Tuesday night as Coach Walz is conscious of the potential number of games this week.

Next up:    Louisville welcomes the Michigan Wolverines

to the KFC Yum! Center