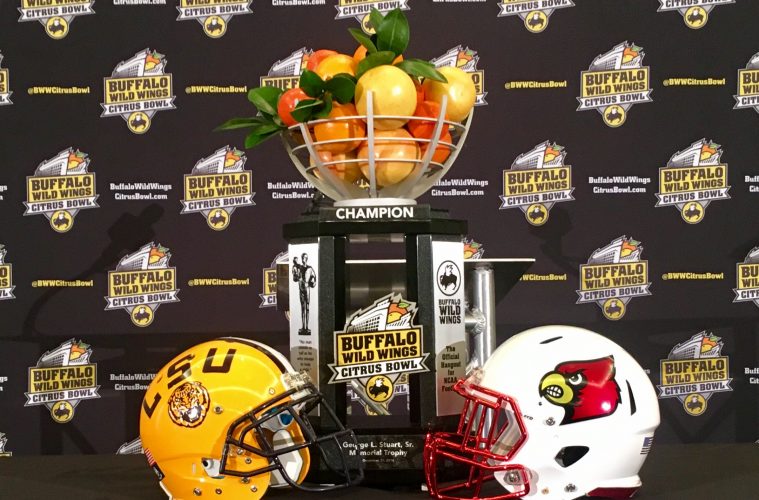 The 13th-ranked University of Louisville football team will face 20th-ranked LSU in the 2016 71st Buffalo Wild Wings Citrus Bowl at the Camping World Stadium in Orlando, Fla. The game is scheduled for Dec. 31 at 11 a.m. on ABC.

Louisville, ranked No. 15 in the Amway Coaches Poll and No. 15 in the Associated Press Poll, is playing in its seventh consecutive bowl game, which is tied for the 16th-longest active streak in FBS.

Appearing in a bowl for the 16th time in 19 seasons, the Cardinals are making their 21st overall post-season game, posting a 10-9-1 record and have wins in four of their last six bowl games.

“I’m thrilled to accept a bid to this great bowl with the history of the Citrus Bowl,” Vice-President/Director of Athletics Tom Jurich said.  “It’s one of the long-standing bowls with a great tradition, and we’re fortunate to have been selected. Orlando is an outstanding destination for our players, staff and families, as well as, our fans. We were able to be in Orlando a few years ago and it was a tremendous location for everyone. It’s a great reward for our program and fans for an outstanding season.”

UofL head coach Bobby Petrino has guided the Cards to a bowl berth for the seventh-straight season, going 3-3 in those contests, and is leading his team to the Citrus Bowl for the first time.

The Citrus Bowl will be the first series meeting between the schools, but Petrino owns a 2-2 record against the Tigers during his time as the head coach at Arkansas.

Louisville (9-3) has posted just its 14th nine-win season in program history and the second in the ACC era. Louisville went 9-4 in its first season in the league in 2014.

Through 12 games, Louisville leads the nation in scoring at 45.3 points per games after scoring over 36 points in nine games, including 70 in the season opener versus Charlotte.

Led by sophomore quarterback Lamar Jackson, the Cards are second in the country in total offense at 558.8 yards per game, the second-highest mark in school history.

Speaking of Jackson, the 2016 ACC Player and Offensive Player of the Year, led the Cardinals in rushing with a school-record 1,538 yards and 21 touchdowns, while passing for 3,390 yards and 30 touchdowns.

The Cards will bring a top 15 defense into the game, ranking 11th allowing 316.3 yards per game and the tenth-ranked rushing defense at 110.4 yards per game.

LSU, 7-4 overall and 5-3 in the SEC, features a daunting defense that flaunts the fourth-fewest points allowed and fifth-fewest yards allowed in the nation.

The Tigers bring one of the nation’s best running back tandems in the country in Leonard Fournette and Derrius Guice, who have combined to run for 2,092 and 22 touchdowns. With Fournette out of the lineup for most of the season due to injury,

Guice has rushed over 1,249 rushing yards and f. The rushing tandem has combined for nine 100-yard rushing games and three 200-yard rushing efforts in team’s eleven games. LSU’s four losses have come by a total of 23 points (5.75 ppg).

Fans immediately can order tickets through Louisville’s Bowl Central, where the online seat selection option will allow you to view real-time availability and select the best seats in the Cardinals’ official fan sections. Lower level tickets are available beginning at $86 each.

Bowl tickets can also be ordered through the athletic department’s ticket office by calling (502) GO-CARDS or by visiting the location at Papa John’s Cardinal Stadium near Gate 2 on weekdays from 9 a.m. until 5 p.m. ET.

By purchasing tickets from the Louisville Ticket Office, fans can secure the best available seats in the official team section as well as help UofL’s candidacy for elite-level bowl selection in the future. Fans who are unable to attend the bowl game this season can donate bowl tickets to a UofL student, active members of the military, or to an Orlando-area charitable organization.

Many Louisville fans have already secured their bowl tickets as Cardinal Athletic Fund members and season ticket holders were given an opportunity to pre-order tickets in November. All pre-order ticket reservations are assured of receiving tickets and will receive notification on their seat location from the ticket office Dec. 6-8.

Complete information on the Buffalo Wild Wings Citrus Bowl will be provided on Louisville’s Bowl Central page on its web site atwww.GoCards.com/bowl.