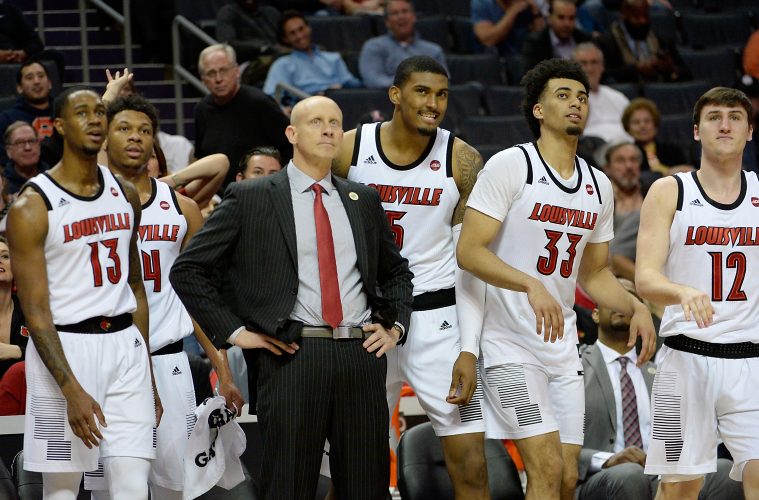 Jordan Nwora had 24 points and nine rebounds, and Louisville notched its 20th win of the season defeating Notre Dame 75-53 on Wednesday in the second round of the ACC Tournament.

Ryan McMahon added 12 points and Steven Enoch had 10 for the Cardinals (20-12), who’ll face No. 3 North Carolina for the third time this season in the quarterfinals on Thursday night.

The Cardinals blew open a nine-point game in the second half with a 22-7 run to build a 24-point lead.Louisville’s length clearly bothered Notre Dame as the Irish were held to 27 percent shooting from the field and 11 percent from 3-point range.

Louisville also dominated on the glass, outrebounding Notre Dame 50-38.
T.J. Gibbs led the Irish (14-19) with 21 points. The Cardinals held John Mooney, Notre Dame’s leading scorer, to seven points on 3-of-18 shooting.
The seventh-seeded Cardinals wasted no time jumping on the 15th-seeded Irish, bolting to a 28-12 lead behind 12 points from Nwora and a rim-rattling put-back dunk from Enoch – one of many dunks from the high-flying Cardinals. Still, Notre Dame cut the lead to nine at halftime despite missing its final 12 3-point shots of the first half.

Nate Laszewski returned to the Notre Dame starting lineup after injuring his back and missing the second half of the Irish’s first round win over Georgia Tech, but was held scoreless on 0-for-6 shooting from the field.

BIG PICTURE
Notre Dame: Mike Brey knows this is a rebuilding year for his young team, so he has to be pleased his team won its first round game against Georgia Tech to snap a seven-game skid. The Irish’s young core will benefit from another year of experience, but this team needs more size and athleticism to get back to competing at the highest level in the ACC.
Louisville: The Cardinals are looking like a solid lock for the NCAA Tournament. And, this is a team that could continue playing in the ACC Tournament. They beat the Tar Heels by 19 in Chapel Hill, North Carolina in January, although North Carolina avenged that loss with a 79-69 win at Louisville on Feb. 2.

UP NEXTNotre Dame: Season over.

Wednesday night marked the fourth time the No. 7 seed has won at second-round game, but the first-ever matchup between a No. 7 and No. 15 seed … The Fighting Irish were the first No. 15 seed to advance to the ACC Tournament’s second round.

With his game-high 24 points, Louisville sophomore Jordan Nwora scored in double figures for the 17th consecutive time this season and the 30th time overall … The 2019 ACC Most Improved Player registered his 13th game with 20 or more points … Nwora also grabbed nine rebounds, just missing his ninth double-double of the season.

With 12 points, Louisville junior guard Ryan McMahon picked up his eight double-figure scoring game of the season and the 15th of his career.
Louisville became the seventh ACC teams this season to post at least 20 wins … The Cardinals have won at least 20 games every year since 2002, when they finished 19-13.

The teams combined to commit only nine turnovers – three by Notre Dame, six by Louisville.

T.J. Gibbs scored 21 points to lead Notre Dame … Gibbs registered his third 20-point scoring game of the season and his first since scoring 23 in a loss to Wake Forest on Feb. 19 … It marked Gibbs’ 22nd double-figure scoring game this season.

Notre Dame junior John Mooney entered the game as the ACC’s leading rebounder and led all players on Wednesday night with 12 boards … Mooney’s 370 rebounds in 2018-19 stands as the third-highest single-season total in school history … He had 10 or more rebounds in 24 of the Irish’s 33 games.