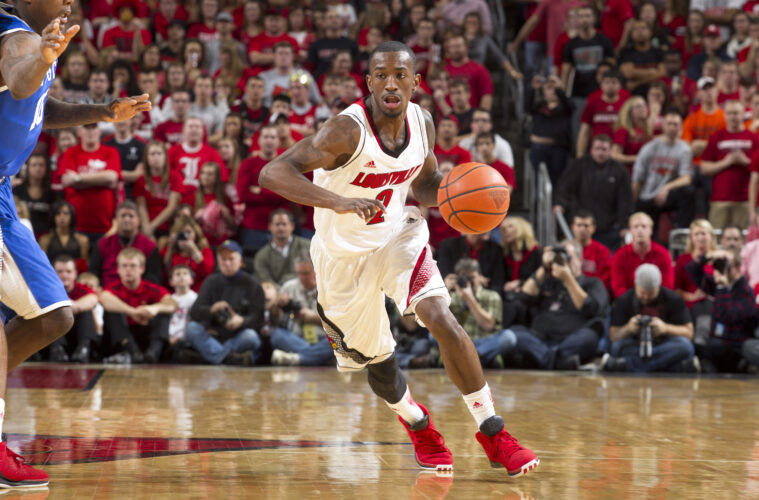 The University of Louisville will retire men’s basketball All-America guard Russ Smith’s No. 2 jersey number at a halftime ceremony of the Cardinals’ Jan. 22 game against Notre Dame in the KFC Yum! Center.  Smith made the initial announcement on Dec. 24 in a personal tweet.

A special 2-for-$22 “flash sale” ticket offer for the Cardinals’ Jan. 22 game against Notre Dame is now available to the general public through Wednesday, Jan. 5, at 2 p.m.  Fans can take advantage of this limited-time offer by visiting gocards.com/RUS2.  Additional ticket options for all remaining home games can be found at gocards.com/tickets.

Russ-focused elements will be featured heavily in the gameday experience, with an exclusive opportunity for UofL season ticket holders and additional fan engagement details to be released in the days leading up to the game.

Nicknamed “Russdiculous,” Smith is the only Louisville player in history with at least 1,800 career points, 350 assists and 250 steals. He is the Cardinals’ all-time leader in steals with 257, is fifth in career scoring at Louisville with 1,908 points, second in career free throws made with 488, and is tied for ninth in career three-pointers with 180.

A consensus All-America selection as a senior in 2013-14 and the 2014 AAC Tournament Most Outstanding Player, Smith averaged 18.2 points, 4.6 assists and 2.0 steals as the Cardinals posted a 31-6 record.  He was a candidate for national player of the year honors and was one of 10 finalists for the Senior CLASS award (first team All-America by AP, USBWA, The Sporting News, CBS Sports, NBC Sports, Bleacher Report, second team NABC). The two-time KenPom Player of the Year (2013, 2014) was among the top four for the Naismith Trophy presented by AT&T and among the top five on the John R. Wooden All-America team.

Smith earned All-America honors as a junior in 2012-13 (AP, NABC, The Sporting News third team) when he led the Cardinals in scoring, averaging 18.7 points (35th in the nation) and 2.1 steals (36th nationally). He was selected as the national Player of the Year by Ken Pomeroy and was the recipient of the 2012-13 BIG EAST Conference Scholar-Athlete Sports Excellence Award for men’s basketball.  He earned the Most Outstanding Player award of the 2013 NCAA Midwest Regional after scoring 31 points against Oregon and 23 points against Duke.

Following his collegiate career, Smith was selected by the Philadelphia 76ers in the second round of the 2014 NBA Draft with the 47th overall pick, and was subsequently traded to the New Orleans Pelicans.  He played in the NBA with New Orleans and the Memphis Grizzlies, and has played professional basketball in Turkey and China, as well as with G League teams Iowa Energy, Delaware 87ers and Fort Wayne Mad Ants, where he is currently playing.

He was the 2017 NBL China Player of the Year when he averaged 60.5 points per game and led the league in scoring that season and in 2019.  Smith scored a career-high 81 points for Luoyang Zhonghe of China on July 5, 2017, adding eight rebounds and seven assists in the game.