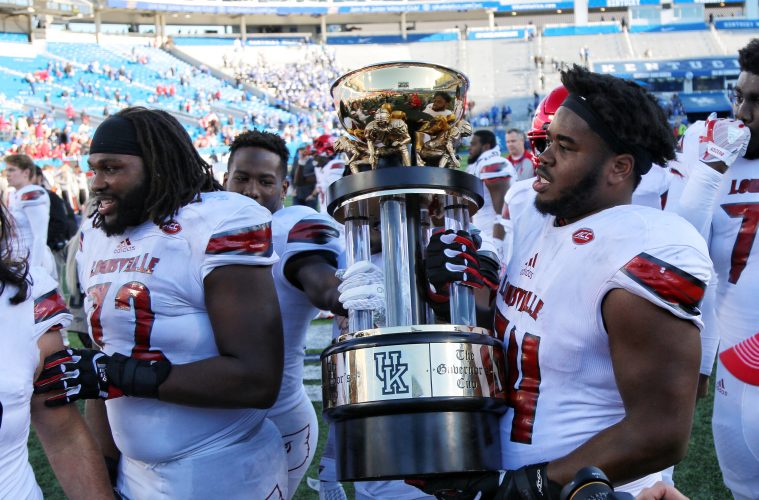 Louisville is “Busier Than Normal” Heading Into Gator Bowl

While most of the country prepares for the Christmas holiday, the University of Louisville football program has been hard at work.

Not only are the Cardinals preparing for Mississippi State in the 2017 TaxSlayer Bowl, the coaching staff was occupied by putting together a top-25 recruiting class during the first early signing period from Dec. 20-22.

“It’s been a busy time for us,” head coach Bobby Petrino said. “Our staff and everyone in the football program have been involved in getting ready for our bowl game, but we also had to be out on the road for recruiting. We had to adjust some things with our practice schedule, but we also had to get ready for this signing day.”

Typically, the focus at this time of the year is on the bowl game. However, with a change in the recruiting schedule, most of the attention was put on the 20-player class that signed on Wednesday.

The Cardinals had an emphasis on the state of Florida, as was evident by the 11 signees from the Sunshine State. They also had six players from Georgia ink National Letters of Intent.

“I’m excited about the signing class,” Petrino said. “I like the class on paper. Obviously, you have to get them in here and see how they practice. We had an emphasis on the defensive line, which was one of our biggest needs. I really like the size and athleticism there. In the other positions, we were going for speed, and I like what we did there.”

While the attention has been on the recruiting class in the last couple of days, the Cardinals have a tough opponent to prepare for in Mississippi State, which is 8-4 overall, 4-4 in the Southeastern Conference.

The Cardinals enter the postseason on a three-game winning streak and have been impressive on both sides of the ball, holding a 28.0 margin of victory over that span. While the offense has played on a consistent level all season, the defense has been the catalyst in the three-game streak.

Louisville has allowed an average of 16.0 points per game and 316.7 yards per game, including limiting Kentucky to 110 yards through the air in the regular-season finale.

“I like the way we have practiced,” Petrino said. “We’ve had good focus and they have been having fun. Most of the practices have been against each other. We have put in some good extra work on the game plan for Mississippi State. They are a good team and we have to be ready to play.”

The Cardinals began game-planning for Mississippi State on Thursday. It has been a little difficult with the recent shakeup in the Bulldogs’ staff.

Dan Mullen, who was the head coach at Mississippi State for the last eight seasons, left to lead the Florida program a few weeks ago and took most of the staff with him to Gainesville.

“It will be a little weird or different trying to understand because the play callers on both sides of the ball have changed,” Petrino said. “We always sit there talking about, that’s what Todd (Grantham) did,’ but he’s not there now.”

The Cardinals will practice Friday and Saturday before leaving for Jacksonville on Christmas Day. Louisville hits the practice field for the first time in Florida on Dec. 26.