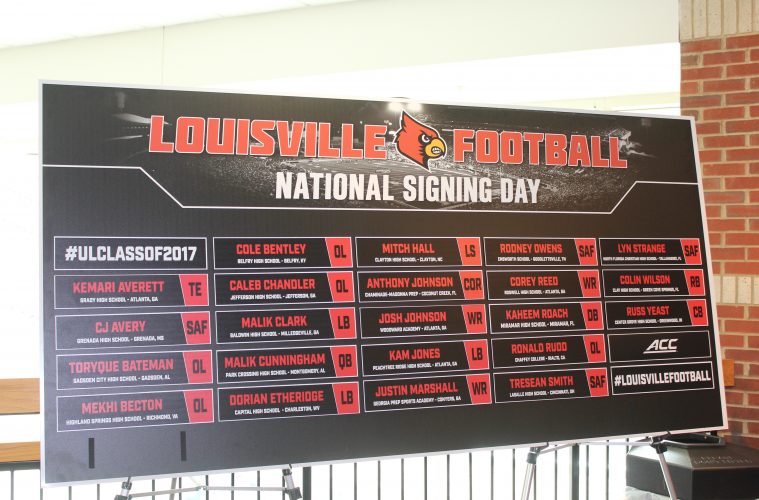 University of Louisville football head coach Bobby Petrino will present the newest members of the Louisville Cardinals football team during U of L’s  National Signing Day on Wednesday, Feb. 7.

Highlighted by an open public event at 5:30 p.m. ET, Cardinals fans will hear first-hand from head coach Bobby Petrino about this year’s incoming class, which is expected to be among the nation’s top-ranked groups.

The football program will host its annual National Signing Day Party in Papa John’s Cardinal Stadium’s Brown and Williamson Club.  Coach Petrino and his assistant coaches will provide comprehensive analysis on all signed members of the Class of 2018 with exclusive video highlights from the coaching staff’s recruiting library.

Admission to the Signing Day Party is free and open to the public. Doors will open at 4:30 p.m. for general admission seating.  Concession stands and a cash bar will be available during the event as well as fan activities and giveaways while supplies last.  Fans should enter the stadium at Gate 6 of Papa John’s Cardinal Stadium and parking is available at no charge.

Fans who attend the signing event will have an opportunity to take a picture with the Heisman Trophy from 4:30 p.m. to 5:30 p.m., which was won by quarterback Lamar Jackson in 2016. Attendees will also be given a free ticket to attend the women’s basketball game that night at 7 p.m. versus Clemson.