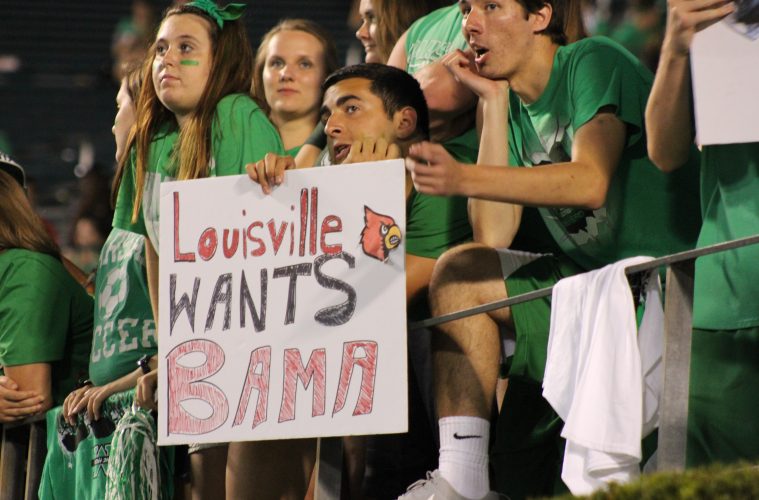 Louisville’s Defense Prepares For Plenty of Unknowns vs Alabama

There are a lot of uncertainties for the University of Louisville football team’s defense heading into Saturday night’s season opener versus Alabama.

Defensive coordinator Brian VanGorder has brought a new scheme and attitude on that side of the football. Despite the numerous question marks, UofL head coach Bobby Petrino likes what he’s seen on defense this fall.

“I’ve liked our camp,” Petrino said. “Like I said last week, our attitude, our toughness, and our commitment to effort has really showed up in camp. I felt like the other night that our assignments and speed, we were playing faster because we knew what we were doing. There wasn’t a lot of hesitation out there.

“So, I was happy with the way we ran to the football and the way we tackled, and the attitude that we’re playing with is what you need.”

While there are a lot of things to figure out defensively, the Cardinals have a bigger issue trying to figure out who the quarterback will be for Alabama this weekend. The Crimson Tide have two solid quarterbacks in Jalen Hurts and Tua Tagovailoa, who led Alabama to a second-half comeback in the College Football Playoff Championship.

“Yeah, and one of them only played a half, and then cranked the ball deep and did a great job throwing the football,” Petrino said. “We’ve been having to prepare for both of them. They both can run, and they’re both big 220-pound guys that can run with big hips that are hard to tackle, so the thing we have to do is get in position to make the tackles when they do run and do a great job of form tackling and getting extra guys to the ball.”

There is an old adage, ‘If you have two quarterbacks, you have none.’ That’s not true at Alabama, where their two signal-callers rank with some of the best in the country.

While much focus has been placed on the quarterback position, Alabama’s offensive line is also one of the best in the country. Notably, the unit averages 309.6 pounds.

The Crimson Tide accumulated 250.6 yards per game on the ground last season and return a 1,000-yard rusher in Kentucky native Damien Harris, who has run for 2,194 career yards.

“They like to run the football,” defensive line coach L.D. Scott reiterated. “They have a big, physical offensive line.

The Cardinals’ defensive line, which is going to be pivotal in helping stop the run, features an array of new faces and plenty of untested talent.

“We are going to find out what these guys can do,” Scott said. “They are new to our program and it’s going to show in this first game. We will have more depth than we had last season, so I’m confident we can go out and compete for four quarters.”

After a long, arduous camp, the Cardinals are only three days away from facing the defending national champions. Petrino has talked all throughout the offseason that he wants his players to believe that they have the ability to knock off the nation’s No. 1 team, and the ninth-year coach thinks he has instilled those beliefs into his young football team.

“I think you do it by working extremely hard in practice and understanding that you did that,” Petrino said. “Trusting your teammates did it and going into the game with confidence, and one of the things that helps your confidence is you really understand what you’re doing, and you study and know the game plan and know what we’re doing and then you’re ready to go execute it.”