Earlier this month we took a look at Louisville’s Offensive S&P+ stats, found HERE. Now, we move on to the strength of recent Louisville teams, the defense. We will also take a look at FEI’s special teams ratings.

Note: All italicized text is taken directly from footballoutsiders.com.

Passing Downs are defined as:

All other downs are Standard Downs.

**Note: The lower number is better regarding the overall defensive S&P+, higher numbers are better on all other categories (rushing S&P+, passing S&P+, etc.)** 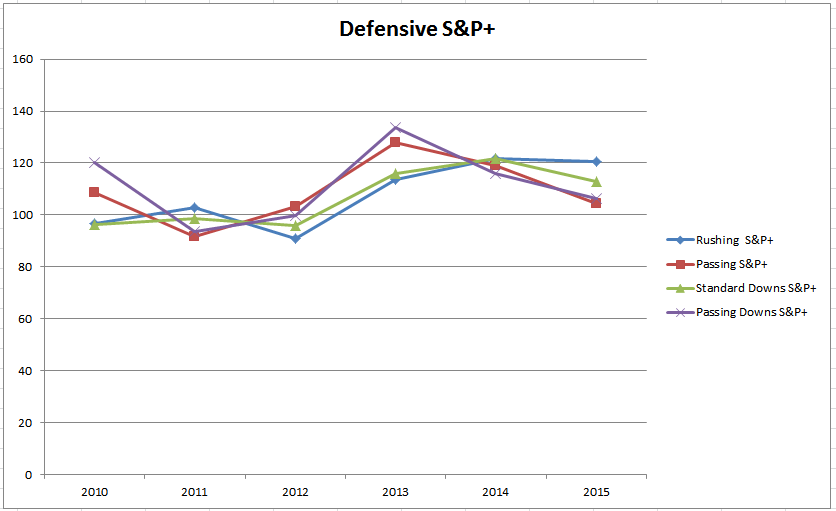 My take: While there has been a slight regression in the overall defensive S&P+ over the past few years, it is hard to find fault with how the defense performed last year. The unit still finished in the top 25 nationally in overall defense and was ranked #12 in rushing defense. If there was one area to focus on in the upcoming year, it would be passing defense and passing down defense, ranked 51 and 50 respectively.

My take: Once again the Louisville defensive line was one of the strengths of the defense, ranking 14th nationally in adjusted line yards and 13th nationally in pass downs sack rate. One area that the unit did regress on was stuff rate and power success rate. In a sense, when the line pinned their ears back and brought pressure, they were very successful. Conversely, they struggled a little stopping running backs behind the line of scrimmage (51st in stuff rate nationally) and preventing running backs from picking up short yardage first downs (37th in power success rate nationally compared to 4th in 2014). The loss of Sheldon Rankins is a little concerning when you consider his versatility and talent on the defensive line. Despite this, the unit still has plenty of talent returning so it will be interesting to see how this evolves over the course of the 2016 season.

The Fremeau Efficiency Index (FEI) is a college football rating system based on opponent-adjusted drive efficiency. Other definitions:

My take: The special teams were not all that special in 2015 to put it bluntly, ranking in the middle of the pack in almost all categories. One area that Louisville did make positive strides in from 2014 to 2015 was punt return efficiency, almost solely due to Jaire Alexander. Alexander is one facet of the team I am most excited to see in 2016 as I believe he has the potential to be a top punt returner nationally. Another area that improved dramatically was punting, which jumped from 116th nationally in 2014 to 58th nationally in 2015. An area of concern I do have is field goal efficiency. Dropping from 26th nationally in 2014 to 61st nationally in 2015 isn’t as big of a deal as is the loss of kicker John Wallace. Who will step up in 2016 to take the sometimes undervalued kicker spot? This is something Coach Petrino hopes to have ironed out in fall camp, well before the season begins.