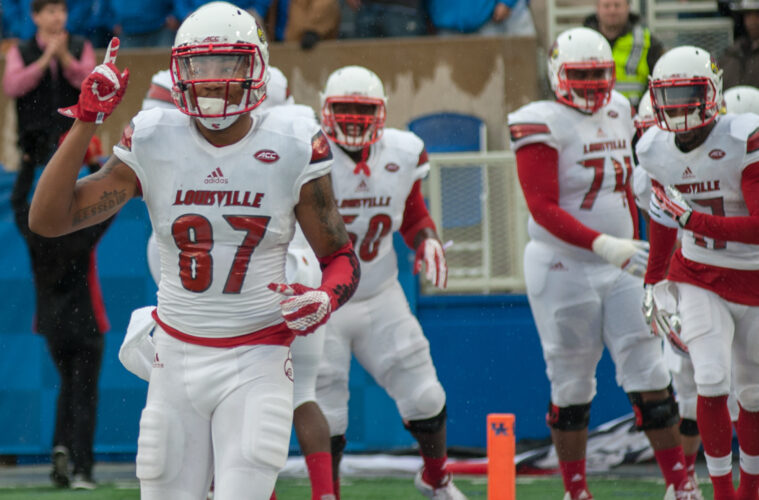 Louisville Football has had some really impressive statistical marks over the past 8-13 seasons.  The Cards have also have had some dramatic differences in its final record as well from the 1st Petrino era, to Steve Kragthorpe, to the beginning of Charlie Strong….and the end of Charlie Strong and eventually now the 1st two seasons of Bobby Petrino.  It’s interesting to see where a young offense in 2015 ranked over the past seasons and then how some trends really affected the overall results of those seasons.

What we’ve done here is compile what we can for individual years in terms of performance & ranking nationally and then we sorted it in order of performance.

2015 was the worst Petrino Scoring Offense by 2.5 points.  This shouldn’t be surprising given the relative youth in Louisville’s offense in 2015.

Personally I’ve drawn a lot of correlations to what happened with Louisville Football’s Youth Movement in 2011 and how that affected things the next season in 2012 and how Cardinal Football might see similar results from 2015 to 2016.  The Cards went from scoring 21.9 ppg in 2011 to scoring 31.2 ppg in 2012.

Louisville Football started 2011 2-5 and finished 7-6 (bowl loss) and in 2015 UofL began 0-3 with a bunch of new faces and finished 8-5 (bowl win).  It’s unlikely that Louisville will add 10.3 ppg to its average, but an increase from 28.7 ppg to 33-35 ppg isn’t out of the question at all given the young talent that will have an opportunity to expand their performance from a year ago (and a Defense that is still REALLY good, but we’ll get to that later).

It’s probably not reasonable to expect that 2016 is going to build 83 yards per game on top of an average of 416.1 BUT a great many of Louisville’s 2015 yardage came on its ability to produce REALLY long plays and many of UofL’s games ended with huge yardage totals but without a lot of points due to Red Zone execution and/or turnovers.

However, I do think that the 2016 offense will be the 1st of the Petrino 2.0 era that will resemble the execution and yardage totals of the Petrino 1.0 era….but with an entirely different style.

Time of Possession was a big problem for the Cards in 2015 and one of the biggest indicators of a young offense.  Louisville’s defense was able to get the ball for its offense early & often throughout 2015, but the Cardinal offense had trouble possessing it.  I fully expect for the Cards to move the Time of Possession into its favor this coming season.

One of the big frustrations for Cardinal fans in 2015 was the fact that the offense could produce yardage & 1st downs…..but not a lot of points. Last season the Cards had the 3rd best 1st down average since 2008, but there is plenty of room to improve.

An 82.76% Red Zone Conversion rate prevented some huge yardage totals and 1st downs per game from turning into a very good Scoring Offense.  The Cards really need to move this percentage north of 87% in 2016 if they hope to make the noise they are hoping for.

UofL may have moved the ball for a lot of yards and even had quite a few 1st downs, but the Cards really struggled on 3rd down besting only the last two Kragthorpe teams finishing 78th in the nation.  Lamar Jackson as a sophomore and with the ability to run every formation & play-action should be enough to really boost this figure 4-7 percentage points.  While that may seem small, it’s probably the difference in the Auburn, Houston & Clemson games.

Personally I don’t take a lot of stock in the Cards 4th Down %.  Bobby Petrino is much more aggressive with his play calls on 4th down based on field position and it’s rarely a desperate move. But obviously Petrino wanted to convert more often than 46.67%, but this isn’t a stat that really needs to take a lot of focus.

95th in penalties in a college football world with 128 teams isn’t good.  Clearly this isn’t entirely an offensive stat, but Louisville needs to eliminate the pre-snap penalties that plagued the team.  Illegal Formation, False Starts, Snap Infractions, Delay of Games….all of that needs to get better for UofL Football.

A negative turnover margin in a game or season usually spells doom. For the Cards Louisville made a lot of mistakes in the games it lost and as a result were -1 on the season.  The defense needs to do a better job of creating takeaways (we’ll discuss that later) but Louisville was 104th in Interceptions Lost and 104th in Fumbles Lost as well.  An offense just can’t afford to be in the 100s of both categories….or even one.   Only 8 teams in college football gave up the ball more often than UofL in 2015.  Amazingly though, the Cards were ONLY -1 on the season.

Inconsistent passing was a problem for the Cards in 2015 but they put together a few big performances to put together a respectable 245.1 yards per game…..but officially the worst of Petrino’s tenure at UofL.  3 starting quarterbacks during 2015 with 3 differing styles is the real cause for this number.  When Lamar Jackson was at QB his tendency to run out of pass called plays also affected this number as did the fact that Lamar was limited in the formations that the Cards could run their offense.  Not being able to go under center not only affected the run game, but also the play-action game which can be a QB’s best friend.

Fans should expect an expansion of the passing game in 2016, but it’s unlikely that we’ll see the HUGE gains in passing like we from Teddy Bridgewater’s 2011 to 2012 season of 84.6 yards per game.  Instead UofL might see an expansion of the entire offense with small gains in passing and rushing from the Running Backs….but it should make the entire system work a little bit better than 2015 which will net huge results.

An incredibly young offensive line, a true freshman QB, and a bunch of Year 1 skill players is a recipe for a lot of sacks.  Only 4 teams allowed more sacks than Louisville did a year ago.  This can happen when you have a young QB with tremendous confidence in his ability to scramble.  Lamar made a ton of plays with his legs in 2015, but he also didn’t balance that ability with just taking the 4-5 yard check down or even just throwing the ball away.  The offensive line isn’t without blame here either, but Louisville will return to 2016 having played a ton of snaps with 3 freshman along its offensive line.  The Cards will be better for it in 2016.

The combination of an offensive line that is a year better with a more seasoned Lamar Jackson with a play-action game….and the skill players that have an idea of what they might expect from their QB will pay huge dividends. But Lamar Jackson is also not the type to change who he is and his scrambling will still sometimes negatively affect this stat…..but fans & coaches will be OK with it given his overall performance.  If UofL can move this stat to 2.5 sacks per game they are still in the bottom 25% of all teams in college football, but I do think Lamar is going to be more conscious with the check down and just playing the next play when nothing is there.

We discussed this in Turnover Margin some, but Louisville being 104th in Interceptions lost is clearly a stat that MUST improve.  The 1st play of the season was an INT and interceptions vs. Houston doomed the Cards as well.  Additionally INTs put the Cards in a huge hole versus Kentucky that they were able to overcome.  FIFTEEN interceptions in 13 games is just way too many and Louisville must find a way to protect the football in the air if they hope to be a national contender.  What’s amazing is that UofL still found a way to win 8 games with some of these stats.

The 1st two seasons of Petrino 2.0 are outliers from Petrino’s previous tenure at UofL.  Petrino wants to run the football in a traditional way and he hasn’t been able to do that in the past two seasons.  UofL football might look more like the Carolina Panthers in 2016 but they have to involve their running backs more in order to grow from last year’s total & to protect its dynamic quarterback.   171.0 yards per game might be the 6th best total in 13 seasons for UofL football, but its not in the range that Petrino would like to see and particularly Louisville didn’t run the ball in the 4th quarter like Coach Petrino would have liked.  I think there will be a great deal of emphasis on traditionally running the football….and of course Lamar Jackson is going to impact this area tremendously too.

(More of a team stat, but I placed this in Rushing)

104th in Fumbles Lost.  Combined with 104th in interceptions.  If Louisville Football wants to get better in 2016 this is an obvious area of improvement.  The Cards did take 4 fumbles lost of its total from 2014, but it’s easy to think about a costly fumble returned for a TD that ultimately cost UofL a game (Game 1: Auburn).

Ball security must take focus for Louisville.  The Cards are no longer a young offense and this is an area where maturity and experience can be quantified.  28 lost fumbles in two years puts your defense in too many terrible positions…it’s time to take control of the football.

John Wallace was an outstanding kicker for UofL, but 2015 was his most inconsistent statistically.  Wallace attempted some long kicks that affected his percentage and he also missed some kicks that were routinely made during his previous 3 seasons.  As a result the Cards hit just 71.4% of Field Goal Attempts in 2015 besting only 2 seasons over the past 11.

Moving into 2016 we aren’t sure yet who might kick the field goals for UofL Football this year so trying to project performance is impossible.  But it’s safe to say that Petrino wants a place kicker who can net 75% or better.

Kickoff Returns haven’t been great as of late.  Even with a kickoff return for a TD last year from Traveon Samuel vs. Clemson Louisville.  Louisville can’t afford to be 87th in any special teams category.   To be fair teams didn’t give Traveon Samuel or Corvin Lamb many opportunities to return kicks.

Same comments as Kickoff Returns.  But Jaire Alexander was a true freshman last year and fielded a lot of punts that should have been fair caught.  Jaire has a unique ability to make the first person miss and get up field and he’ll likely be a more efficient weapon in 2016.  Still this has to be better.