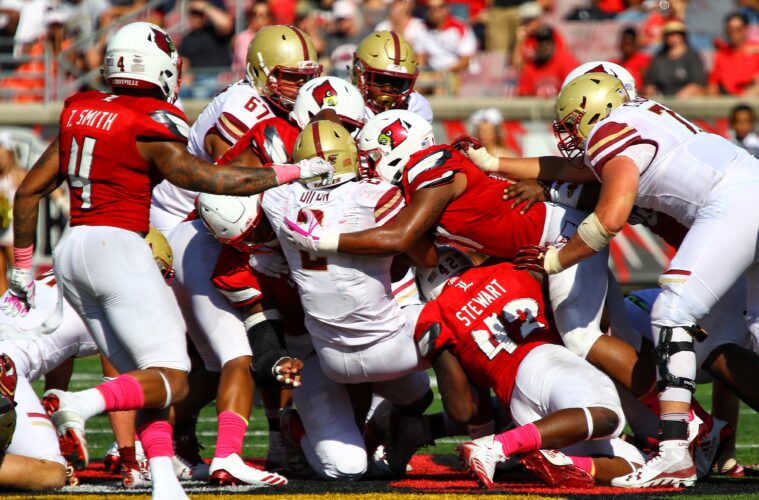 The staple of Louisville Football over the past decade has actually been its defense.  Nationally the Cards might be known for Bobby Petrino’s offense or the stellar play of its Quarterbacks…but the real story has been the Cardinal Defense!

With the exception of the Steve Kragthorpe era and Year 1 of Bobby Petrino (2003) Louisville’s defense has ranked in the Top 40 in Scoring Defense & in the Top 23 of Total Defense every year over the course of its last 4 coaching regimes.  This culture of defense has created a period of unprecedented success for the football program.

It is interesting to see where 2015 fits into the various statistical categories and how that might project 2016 performance.  The Louisville Defense will lose Sheldon Rankins, James Burgess, Pio Vatuvei, and Keith Brown but will otherwise return a majority of its core assets from last season.

In 2015 Louisville Football allowed 24.1 ppg, 39th in the nation.  That total is just the 9th best over the past 13 seasons.  A top 40 showing is solid for most programs but it was a little off what expectations were for the 2015 group.  Some of this can be attributed to the offense’s high number of turnovers because scoring defense accounts for a TEAM’s ability to limit points on the scoreboard and not points while the actual defense is on the field.  There is also no value attributed to short fields or special teams TDs.

Even with that in mind Louisville’s defense did have a few lapses in some games it lost: Pitt, Florida State, Auburn, Houston.  So fans should expect improvement in points allowed for a variety of reasons that we will discuss below or discussed previously in the offensive article posted previously.

When the 8th best Total Defense performance over the past 13 years is 18th in the nation….you’ve had a good run on the defensive side of the football.  The Cards allowed just 332.8 yards per game last year and while it was a regression from 2014’s 308.5 yards per game, the defense was a major weapon (and sometimes crutch) for UofL Football as whole.

With some better offensive metrics (which we fully expect) the Cardinal defense is likely to make some strides towards a better showing in 2016.

The Cards allowed 2.2 more 1st downs per game in 2015 than they did in 2014.  That’s the wrong direction, but still very strong.  As long as UofL doesn’t continue the trend and they either improve or hold steady on this metric then fans should expect another strong defensive season.

The Cards could certainly improve in the Red Zone defensively.  Last season opponents scored 82.35% of their trips inside the Red Zone.  It wasn’t a horrible metric, but it’s not what you might expect with the defensive tools that Louisville had last season.  Moving this number in the 78% or less range changes the outlook a great deal.

On 3rd Down the Cards were a solid 35th in the nation at 35.32% opponent 3rd down conversion percentage. Some of these conversions happened at inopportune times in games that Louisville lost….and those untimely conversions certainly can have more of an impact than the overall figure so this is an area that needs to be improved upon slightly, but it’s more about WHEN these 3rd down conversions occur.

Opponents 4th Down Conversion percentage was pretty average.  Typically this stat shows how desperate teams are late in the game and usually there shouldn’t be a ton of evaluation of it.

Turnover Margin is a HUGE deal. But it’s also impacted by the offense.  Defensively Louisville GAINED 26 turnovers during the 2015 season which was the 21st best performance in college football.  The problem was that Louisville gave up 27 offensively.  The defense did its job in this category and hopefully will continue to take the football away from opponents at the same rate so that an improving offense can capitalize on Turnover Margin.

Also a team stat that the offense can affect.  Some defensive penalties cost the Cards in crucial situations in games that it lost.  Devonte Fields off sides vs. Auburn, Keith Brown’s targeting vs. Florida State.  But overall penalties weren’t a huge deal for the Cardinal defense.

Passing defense is usually a direct reflection of how tough it is to run the football on a defense OR a good measurement of a team that usually in the lead and opponents are passing throughout the 4th quarter trying to save time and gain large chunks of yardage.  Still UofL can do better than 212.5 yards per game allowed in the air and better Cardinal teams have certainly had more leads in games with strong rush defenses than last year.

Louisville Football has been able to get sacks consistently and has been a Top 20 Sacks team in 7 of its last 13 seasons.  2015 was no exception to that as the Cards finished 9th overall with 2.92 sacks per game.  UofL loses Sheldon Rankins who freed up the OLBs to make noise, so the Cards will have to continue to put pressure on QBs without the help of Rankins.

The Cards weren’t as effective in 2015 at getting INTs as they were in 2014….but UofL was still 14th in the country with 17 picks the 2nd best performance in the past 8 seasons.  Louisville’s secondary entirely returns but they will need to find a way to replace the interception and passing defense of James Burgess from the linebacker position.  A big boost should come from the inclusion of Safety Dee Smith who will play a much more prominent role as a sophomore and has shown the ability to be a ball hawk.

Passes defended with a high number of interceptions go hand in hand.  So there is no surprise that 2015 was #2 and 2014 was #1 over the past 8 seasons.

Running the football on Louisville has been a chore over 8 of the past 13 seasons.  2015 was the 7th best performance since 2003 in stopping the run and Louisville was 14th in the NATION! The Cards did lose Sheldon Rankins, Pio Vatuvei, James Burgess, Keith Brown & Nick Dawson-Brents out of their front 7.  So it will be interesting to see how UofL deals with these personnel replacements and if they can build on last year or at the very least maintain.

2015 was incredibly impressive in forcing fumbles.  Especially when coupled with the number of interceptions UofL got as well.

The Cards were VERY successful at getting tackles behind the line of scrimmage last season.  Only 2013 had a higher number of TFLs.