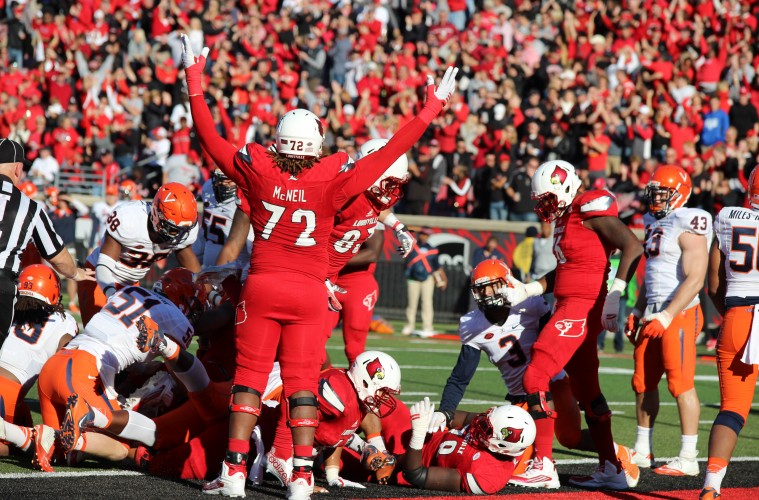 The Cards are BOWL ELIGIBLE!!!!  We can finally take a look at the bowl projections as something that can actually happen now that the Cards have achieved their 6th win following an 0-3 start.  Kelly Dickey provided a stat after the game that since 1980 there have been 507 teams start 0-3 and just 22 were able to achieve bowl eligibility.

Now at 6-4 with 2 games remaining Louisville has a chance to improve its bowl profile with road games vs. Pitt and Kentucky.

Fans have voiced their desire to avoid the 12/26 bowl date, the day after Christmas and the same day that UofL and UK will play in Rupp Arena at Noon.  Louisville is still aspiring for the Music City/Gator Bowl spot.  The biggest question now is whether or not Clemson can win the ACC Championship over North Carolina and make the College Football Playoff.  If the Tigers fall the ACC could be left out of the Final 4 and it would force a re-shuffle of everyone’s projections and slide each ACC team down a slot.

Personally I don’t see UofL as a Tier 2 bowl team in the ACC in 2015 but there is a lot left to be determined.  Below are the bowl game tie-ins for the ACC and how the are selected.  In parentheses are my best guesses for each game and I’ve added my rationale for each stage in the selection process.

My Reasoning:  Clemson has Wake & South Carolina to close the regular season and will meet UNC in the ACC Championship game in Charlotte unless disaster strikes for the Tar Heels.  That will be a fantastic game but I’ll side with the Tigers.  That loss will prevent UNC from jumping FSU who has Chattanooga and Florida remaining on the schedule and as long as the Seminoles beat the Gators (I believe they will) FSU will be the highest ranked ACC team at the conclusion of the season.  Clemson goes to Playoff, FSU gets New Year’s 6 spot and North Carolina is the best available for the Russell Athletic Bowl.

My Reasoning:  This is where it gets muddled.  There are Four Tier 1 bowl spots and there will be 6 ACC teams that are either eligible already or can become bowl eligible in the final two weeks.   If Louisville can beat Pitt & Kentucky they could potentially be the most attractive team in this group and would more than likely be placed by priority and the Gator Bowl might decide to take the Cards.  If they don’t the Music City isn’t likely to pass up UofL.

The teams to watch are NC State (6-4) & Duke (6-4) who along with Virginia Tech (5-5)  would probably like to be slotted into the Belk Bowl.  NC State should split its final two vs. Syracuse & UNC, Duke has UVA & Wake, and VT has UVA and UNC remaining.  I think Duke wins its final two and finishes 8-4, NC State finishes 7-5, and VT loses both of its final two games and misses a bowl.  What could be interesting is if Pinstripe & Duke choose each other over the Belk Bowl due to its higher payout and alumni in the NYC area.  If that happens, NC State would get Belk and Duke would go Pinstripe.

But I don’t see that happening for NC State.  Pitt is much closer to NYC (6 hour drive & easy flights) and would have the right profile for a game at Yankee Stadium.  Even if Pitt loses to Louisville they will face a Miami team that hasn’t shown much life lately.  Miami has GT & Pitt left and could easily drop both.  I think NC State is a Tier 1 bowl team for the ACC and Miami drops down to Tier 2.

My Reasoning:  The ACC will fall short to fill all of its bowl slots in 2015.  The only team that has a chance to become bowl eligible who currently isn’t is Virginia Tech and I believe they will lose both of their final games and finish 5-7 on the season.  But if the Hokies do win a game (mostly UVA) they’ll be a lock for the Military Bowl.  Miami makes good sense in the St. Petersburg Bowl leaving the Independence and Quick Lane Bowls looking for eligible teams from other leagues.