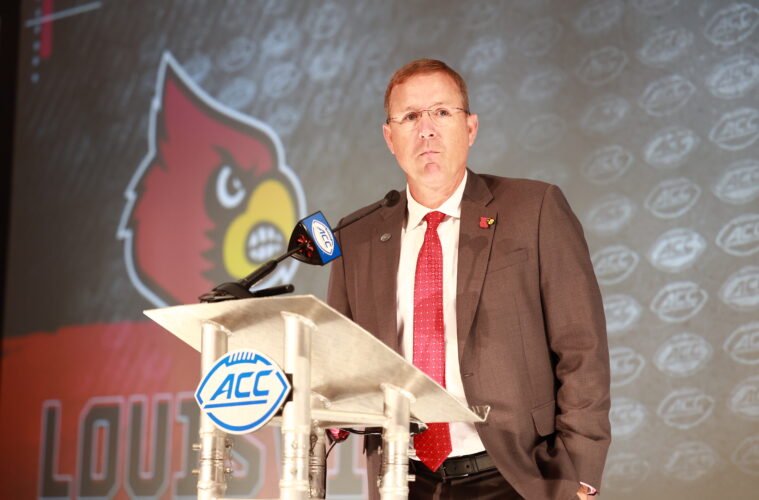 Louisville finished 6-6 in the regular season in 2021. Scott Satterfield’s team in 2020 was 4-7 and in 2019 the Cards were 8-5. With each season there are movements in statistical categories and regressions in areas. Being that this team did not meet expectations we’ll begin with the regressions and finish with the improvements.

Louisville Football had it’s lowest (non-COVID) average attendance since the last year of the Steve Kragthorpe era. In 2021 Louisville averaged 43,965 fans in Cardinal Stadium, compared to 49,912 in Scott Satterfield’s 1st season in 2019. The 2021 total is the lowest average attendance for UofL Football since the 1st expansion 2010.

Louisville put together a Top 20 Passing Defense in 2020 but regressed drastically in 2021 to its worst pass defensive performance of the Satterfield era. Part of this is playing great quarterbacks like Matt Corrall, Dillon Gabriel, Sam Hartman, Devin Leary and Brennan Armstrong. But QB play in the ACC is always going to be strong. Have to be much better.

Louisville was able to maintain its Total Offense numbers, but not on 3rd Down. The Cards dipped to its worst conversion % of the Satterfield era on 3rd Down Offensively from 34th to 74th in a year.

Louisville went from a Top 25 First Downs Allowed Defense to 106th. It’s the most 1st Downs allowed in the Satterfield era and approached the 2018 season totals.

Louisville got over 4 percentage points worse in the allowed TDs in the Red Zone in 2021. A huge difference in the W-L column.

Louisville lost a couple of games directly related to its field goal kicking in 2021. Unfortunately James Turner did not have the season in 2021 that he did in 2020 and crucial missed kicks versus Wake Forest, Virginia and Clemson might have turned those games into Ws for the Cards. Turner also missed makeable kicks versus NC State & Kentucky but would not have changed the outcome.

Louisville allowed 0.4 more points per game than it did in 2020. Surprising considering how much better Louisville was in Turnover Margin, going from -12 to +2 from 2020 to 2021. It’s a slight increase, but the Cards were looking to take a step forward defensively in 2021. It didn’t happen.

It’s a slight regression from 2020 of a little under 6 yards per game. But it was a decline. Not surprising with the Cards looking to replace Tutu Atwell, Dez Fitzpatrick and losing Braden Smith to injury during the year.

Louisville dramatically turned around its fortunes in protecting Malik Cunningham. Going from 92nd to 26th.

Louisville also improved at not allowing defenders into its backfield in 2021. Going from 121st to 24th.

The Cards were able to finally get all of those passes defended to turn into INTs. Increasing its total by 5. If not for the injury to Kei’Trel Clark at NC State perhaps the Cards would have gotten a few more.

Louisville ticked up in the Red Zone nearly 2% points.

Louisville increased its TD Conversion % in the Red Zone by over 3% points in 2021.

Louisville increased its scoring by 2.4 points per game.

UofL moved up from 29th to 20th in Total Offense by adding 6 yards per game despite losing Javian Hawkins, Tutu Atwell, and Dez Fitzpatrick. The Cards have been surprisingly consistent in gaining yards in the Satterfield era despite changing conditions and personnel.

The Cards rushed for 11 more yards per game despite losing Javian Hawkins from a year prior nearly matching Satterfield’s 2019 total.

2021 was the best rushing defense of the Satterfield era coming in at 76th. The total would have been much better had the Cards not allowed a year’s worst 362 yards rushing and 7 TDs in the season finale versus Kentucky.

This is a nerdy stat, but it’s an efficiency measure to figure out how hard a team is working to score. The lower the better. Louisville in 2021 made big strides from 89th to 54th in Yards Per Point. For comparison Cincinnati is #1 in the country in this category at 11.0 yards per point. New Mexico is the worst team at 21.1 yards per point.

Stats can lie… and they lie here. Louisville actually improved defensively on 3rd down if you look at stats. BUT the Cards gave up more than 4.3 MORE FIRST DOWNS. So we’ll list in the improvement category, but the truth is that teams just converted more often on 1st & 2nd down.

Louisville was able to finally get some reliable pressure on the QB when it tried in 2021. Best Sack performance since 2015.