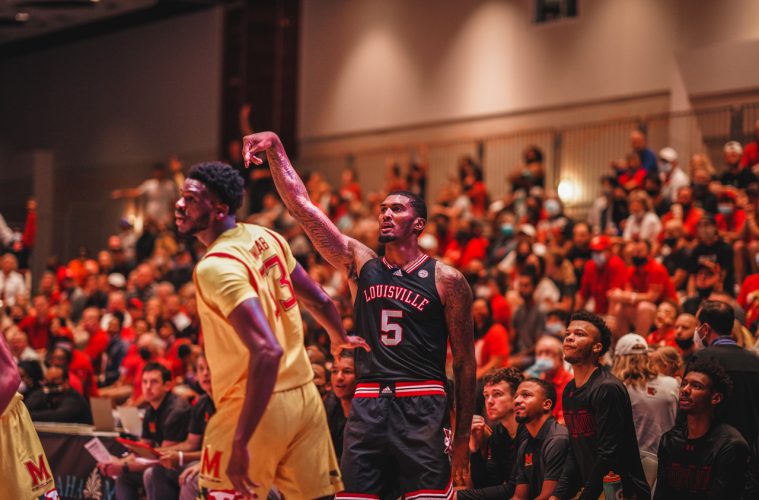 Louisville Faces Off vs. Maryland TONIGHT

Louisville men’s basketball returns to the KFC Yum! Center to host No. 22/25 Maryland at 7 p.m. ET Tuesday in the ACC/Big Ten Challenge presented by Continental Tire. The game will air on ESPN2.

The Cardinals are still looking for their first win of the season after dropping three games in last week’s Maui Invitational, most recently falling 81-62 to Cincinnati on Wednesday. Maryland improved to 6-0 on Friday with a 95-79 victory over Coppin State.

Louisville is 6-2 against Maryland all-time, including 2-0 at home. The teams met last season in the Baha Mar Hoops Championship title game, which UofL won 63-55 to take the crown.

• Maryland is the third ranked team Louisville has faced in its last four games. This is the first time the Cardinals have faced three ranked teams in their first seven games since 1997-98, when they met No. 3 North Carolina, No. 6 Purdue and No. 15 Arkansas in December.

• Louisville is 4-4 all-time in ACC/Big Ten Challenge games, with all four wins coming at home and all four losses coming on the road. This marks the eighth time in nine years that Louisville’s Challenge opponent has been ranked.

• Maryland head coach Kevin Willard was an assistant coach at Louisville under Rick Pitino from 2001-07. The Cardinals were a combined 142-58 during Willard’s six years at Louisville, reaching the 2005 Final Four.

• Over the first three games of the season, junior forward JJ Traynor averaged four points and made 5 of 13 total shots (38.5%). In the last three games, including his first start against Cincinnati, Traynor has averaged 8.3 points and made 10 of 21 shots (47.6%). Traynor is 5 of 12 from 3-point range this year (41.7%) after making seven total 3s in his first two seasons.

Malik Williams had 13 points, 12 rebounds and four steals, Jarrod West scored seven of his nine points in the final five minutes and Louisville beat Maryland 63-55 to win the Bahamas Championship.

West gave Louisville the lead for good at 52-49 with a long 3-pointer. He added a layup in the lane and found Williams with a nice pass to make it 58-53, and the Cardinals led by two possessions the rest of the way.

Louisville moved its record to 6-2 against the Terps and snapped a two-game skid against Maryland.

The Terps held Louisville without a field goal over a six-minute stretch in the first half, going on a 12-1 run, before building a 32-27 lead at halftime. The Terps used a 13-0 run midway through the second half to take a 47-42 lead, but Louisville rallied with a 16-6 surge.