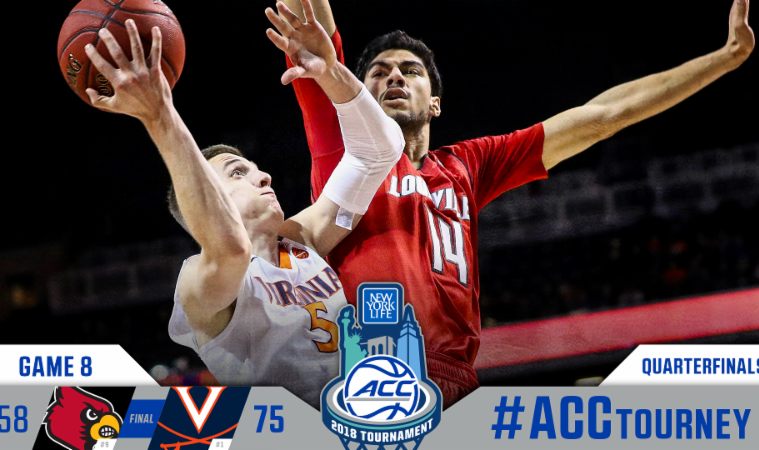 Kyle Guy and No. 1 Virginia looked like healthy favorites in their postseason debut, beating Louisville 75-58 on Thursday in the quarterfinals of the Atlantic Coast Conference Tournament.

Guy scored 19 points in his speedy return from a sprained left knee and the top-seeded Cavaliers (29-2) weathered a second-half charge. They’ll play 19th-ranked and fourth-seeded Clemson or No. 12 seed Boston College in the first semifinal Friday night in Brooklyn.

Devon Hall had 14 points as Virginia methodically dismantled a Louisville team desperate for a big upset to augment its NCAA Tournament credentials. Instead, the ninth-seeded Cardinals (20-13) will sweat out Selection Sunday hoping for an at-large bid.

Guy sprained his left knee last Saturday in the regular-season finale against Notre Dame and went scoreless in 18 minutes. But the sophomore guard, Virginia’s leading scorer and a first-team All-ACC selection, started against the Cardinals as expected, wearing a large, black brace on his knee.

Coming off curls and firing from long range, he shot 7-of-14 from the field – including 4-for-6 on 3-pointers – in 36 minutes. Guy also grabbed a team-high seven rebounds, and his three-point play with 2:35 left made it 69-54 soon after Louisville had sliced the margin to four.

Virginia opened a 17-point lead late in the first half and was still up 13 before the Cardinals went on an 11-2 spurt to trim the deficit to 56-52 with 8:55 remaining. But reserve forward Mamadi Diakite scored six straight Cavaliers points inside, putting in his own airball after it slipped out of Louisville’s grasp, and Virginia regained control.

A week earlier, the Cardinals nearly took down Virginia at home before losing 67-66 in gut-wrenching fashion. They led by 13 with 11 minutes to play and by four with 0.9 seconds on the clock, but redshirt freshman De’Andre Hunter, the ACC Sixth Man of the Year, banked in a 3-point heave at the buzzer to win it for the Cavaliers.

A second-round victory Wednesday over Florida State gave the Cardinals another shot at Virginia, but this time they came up way short.

Hunter had 12 points for the Cavaliers and Ty Jerome, from nearby New Rochelle in the suburbs, added 11. Diakite scored 10, helping UVA to a 42-16 advantage in the paint.

Ray Spalding led Louisville with 16 points, and Deng Adel had 13. The Cardinals stayed in it for a while by making nine 3s, but shot just 36.7 percent overall against the nation’s stingiest scoring defense.

#ACCTourney Notes
Virginia (29-2) advances to Friday’s 7 p.m. semifinal game and will face the winner of Thursday’s second quarterfinal matchup between No. 4 seed Clemson (22-8) and No. 12 Boston College (19-14) … The Cavaliers defeated the Tigers 61-36 at home on Jan. 23 during the regular season and edged Boston College 59-58 in Charlottesville on Dec. 30.

The Cavaliers improved to 39-62 all-time in the New York Life ACC Tournament, including 6-2 as the No. 1 seed and 24-36 in quarterfinal games.

UVA has now reached the semifinals in four of the last five seasons … The Cavaliers have won at least one game in each of the last five ACC Tournaments, tying a program best first set from 1970-74.

Louisville slipped to 1-3 in ACC Tournament play and to 0-3 in the quarterfinals.

The No. 1 seed is now 13-0 all-time versus the No. 9 seed in ACC Tournament quarterfinal meetings.

The Cavaliers’ Mamadi Diakite (10 points) has scored nine or more points in four of the last five games.

Virginia limited its 30th opponent of the season to less than 50 percent shooting and held the opposing team to under 60 points for the 23rd time.

The Cavaliers will carry a six-game winning streak into Friday night’s semifinal and have won at least 29 games for the eighth time in program history.

With his team-high 16 points, Louisville junior Ray Spalding posted his seventh consecutive double-figure scoring game, his 23rd of the season and the 35th of his career.

The Cardinals’ Deng Adel (13 points) now has 30 double-figure scoring games for the season and 56 for his career.

Louisville senior Anas Mahmoud blocked two shots on Thursday, upping his ACC leading total to 99 … The Cardinals, who entered the game ranked third nationally in blocked shots as a team, have rejected 204 shots in their 33 games.