“We realize that with almost a new team that we have our work cut out for us, but that’s the excitement of this type of schedule,” said U of L Coach Rick Pitino, whose team has played a schedule ranked among the top 16 toughest by the ratings percentage index (RPI) in seven of the last eight seasons. “We have to get ready early and we know from our summer trip what we need to work on.  Our freshmen are going to have to develop early and we feel they have the ability to do so.  We’re very excited about our schedule and look forward to the challenge.”

Including a pair of exhibition games against intrastate teams, 12 of the Cardinals’ first 14 games will be played at home in the KFC Yum! Center, UofL’s spectacular 22,000-seat home arena.  The Cardinals will face their first outside competition in an exhibition game on Nov. 1 in the KFC Yum! Center against 2015 NCAA Division II Final Four participant Bellarmine, a team coached by former UofL assistant Scott Davenport.  Kentucky Wesleyan will provide the opposition in UofL’s second home exhibition game on Nov. 9.

UofL officially opens its season on Nov. 13 against Samford.  The Bulldogs are coached by Louisville native Scott Padgett, who played for Pitino at Kentucky.

The Cardinals begin four games in the Brooklyn Hoops Holiday Invitational with its first three at home  in the event against Hartford on Nov. 17, North Florida on Nov. 21 and St. Francis onNov. 24.  The Cardinals’ final game of the round-robin tournament will be against Saint Louis on Nov. 28 at the Barclays Center in Brooklyn, N.Y.

Louisville will visit Michigan State in its first true road game of the year on Dec. 2 in the Big Ten-ACC Challenge, which features the teams in last season’s NCAA East Region final.  The Cardinals will play their next six straight at home, beginning with Grand Canyon on Dec. 5, Eastern Michigan on Dec. 12, Kennesaw State on Dec. 16 and intrastate foe Western Kentucky onDec. 19.

Next up for Louisville will be a pair of doubleheaders in the 14th Annual Billy Minardi Classic, an event named in memory of Pitino’s brother-in-law who died in the Sept. 11, 2001 terrorist attacks on the World Trade Center.   The first game on Dec. 22 features UNC Wilmington, coached by former UofL assistant Kevin Keatts, and Utah Valley, coached by Mark Pope, who played for Pitino at Kentucky.  Louisville follows that game facing Missouri Kansas City, which is coached by former UofL assistant Kareem Richardson. UNC Wilmington will play UMKC on Dec. 23, followed by the Cardinals against Utah Valley in an ESPNU-televised game.

Louisville will close out 2015 and play its final non-conference game at intrastate rival Kentucky on Dec. 26 in Lexington in the CBS-televised game.

Louisville’s ACC schedule will include a challenging slate of 18 games, including two games each against Duke, Georgia Tech, Pittsburgh and Virginia as each league team will face 10 opponents once and four twice.

The Cardinals will begin play in the ACC at home against Wake Forest on Jan. 3, followed by the Cardinals’ initial ACC road opponent at NC State on Jan. 7.  The ACC Tournament will be staged at the Verizon Center in Washington, D.C. on March 8-12.

Despite losing four starters including a pair of NBA Draft picks, optimism is high for Louisville, which posted a 27-9 record last season and reached its fifth NCAA Elite Eight in the past eight years. In addition to an incoming top ten freshman class, UofL bolstered its roster with a pair of senior graduate transfers in 6-6 guard Damion Lee, who was the nation’s fourth-leading scorer at Drexel last season (21.4 ppg) and 6-2 guard Trey Lewis, who led Cleveland State with a 16.3 scoring average and made a school-record 96 three-pointers.

A pair of 6-10 front court returnees gained experience in international competition over the summer as sophomore Chinanu Onuaku won a gold medal as a member of the 2015 USA Basketball Men’s U19 World Championship Team, while junior Mangok Mathiang competed with Australia and led the 2015 World University Games in rebounding.

The full schedule is attached.  Complete tipoff times and television designations will be announced at a later date.  The composite ACC men’s basketball schedule is available at this link:  http://theacc.co/MBB1516Schedule 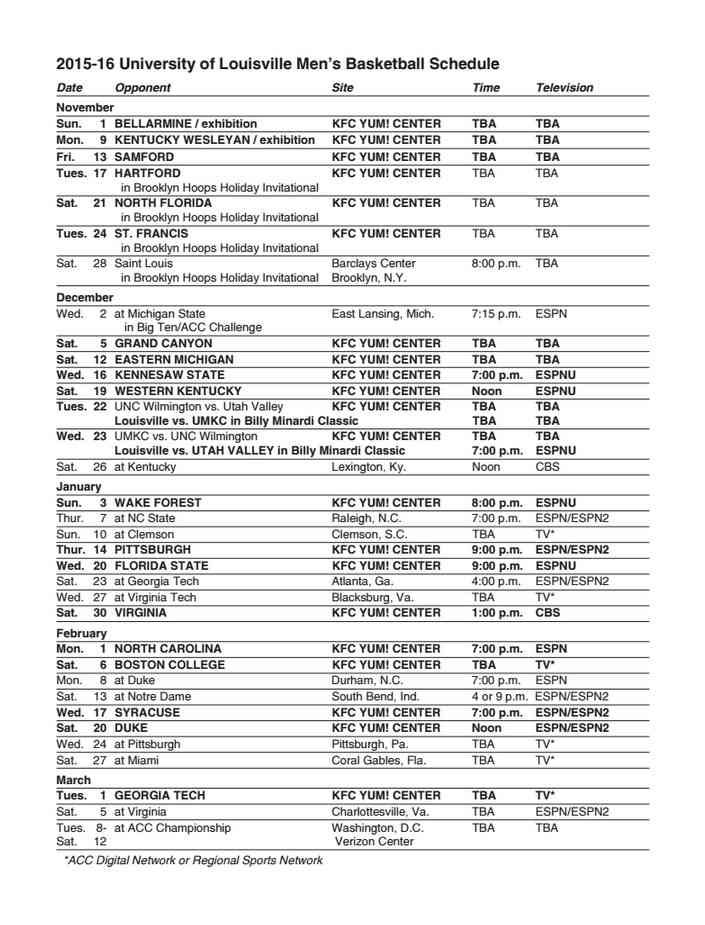