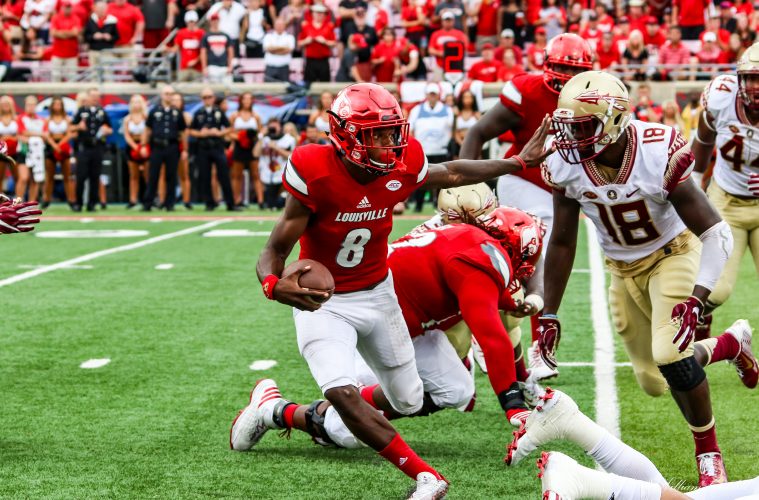 After leading the University of Louisville football team to one of the biggest wins in school history, sophomore Lamar Jackson has been named the Davey O’Brien Quarterback of the Week for the second straight week, the Davey O’Brien Foundation has announced.

The native of Boynton Beach, Fla., guided the Cardinals to a 63-20 win over No. 2 Florida State – the largest win over a ranked opponent in school history. On the ground, Jackson totaled 146 yards on just 17 carries (8.6 yards per carry) and scored four rushing touchdowns for the second consecutive week. He also was 13-of-20 passing for 216 yards and one touchdown with one interception.

He directs a Louisville offense that sits atop the nation in scoring at 65.0 points per game and has helped the 3-0 Cardinals match the highest AP ranking in school history (No. 3). Individually, Jackson has accounted for 18 touchdowns to rank in a tie for first nationally in points responsible for (108).

Jackson joins a pair of previous Davey O’Brien National Quarterback Award finalists, Trevone Boykin of TCU and Dak Prescott of Mississippi State, as players to win multiple weekly honors in the same season. Boykin accomplished the feat last season, while Prescott won the accolade twice in a three-week span during the 2014 campaign.

Jackson is the lone player in the country to be named to the Davey O’Brien “Great 8” all three weeks this season. Just three other players have been named twice.

The Davey O’Brien Foundation is celebrating its 40th anniversary in 2016 and has given away nearly $1 million in scholarships and university grants to help high school and college athletes transform leadership on the field into leadership in life.

The Davey O’Brien National Quarterback Award winner will be announced on Dec. 8 during ESPN’s The Home Depot College Football Awards. The winner is not required to have won a weekly award during the season. A list of 16 semifinalists will be announced on Nov. 10, while the three finalists will be named on Nov. 22. The Davey O’Brien Fan Vote, now in its 10th year, gives fans a chance to play a role in determining the award winner by voting daily at VoteOBrien.org.