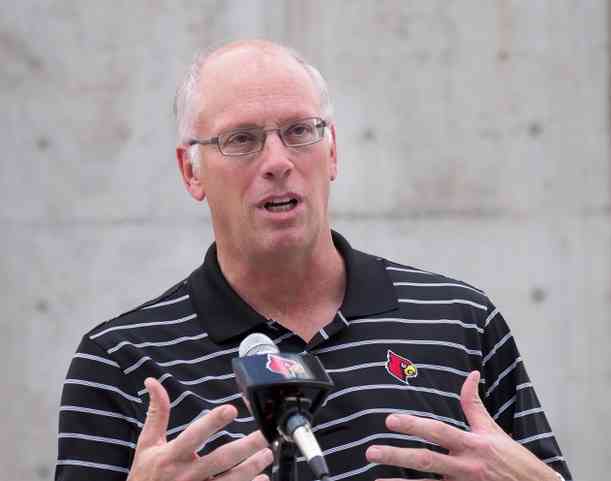 Kenny Klein, a veteran administrator of over 40 years in collegiate athletics including the last 39 at the University of Louisville, will retire from UofL at the end of June.

Klein currently serves as Senior Associate Athletic Director on the Cardinals’ senior leadership team and as Sports Information Director.  Following his retirement, he is expected to continue to work with the UofL men’s basketball team in another role.

Klein joined the Cardinals’ staff in July of 1983 after nearly two seasons as sports information director at Morehead State University. Prior to that stint, Klein spent four years as an undergraduate and graduate assistant at Murray State University, where he earned his bachelor’s degree in journalism in 1981. At the time of his appointment at UofL, he was the youngest SID at an NCAA Division I football institution at 23.

A 2015 inductee into the College Sports Information Directors of America (CoSIDA) Hall of Fame, Klein also worked one season as a student assistant in sports information at Austin Peay State University and was a sports writer for the Clarksville Leaf-Chronicle.

Klein’s devoted efforts in his longtime role at UofL led to his induction into the state’s Kentucky Sports Hall of Fame in 2017.  He received the 2012 Katha Quinn Award, presented by the U.S. Basketball Writers Association in recognition for providing outstanding service to media covering college basketball.

Among his administrative roles as the primary men’s basketball contact for the Cardinals, Klein has worked every UofL men’s basketball event, a stretch of 1,309 consecutive games.  During that time, the Cardinals posted a combined 888-421 on-court record and achieved numerous conference and national titles.

Klein has coordinated the computerized statistics operation for 36 NCAA Final Fours. In his initial season with the Cardinals, Klein edited the 1983-84 UofL basketball guide which was judged second in the nation by CoSIDA. Klein, who edited UofL’s 352-page basketball history book Above the Rim, has also received multiple other publication awards while at UofL and Murray State.

He served as the media coordinator for the 1987 USA Pan American Games men’s basketball team, has served on the NCAA Final Four media coordination committee and annually assists in media operations for the Kentucky Derby. He was the local media center committee chairman for the 1996, 2000 and 2014 PGA Championships in Louisville, and served in a similar capacity for the 2008 Ryder Cup and 2004 and 2011 Senior PGA Championships. He also assisted in the media operations at the 1999 Ryder Cup in Boston.

Klein serves as vice-chairman of the CoSIDA Scholarship Committee and is the athletic department’s representative for multimedia rights with the ACC, including oversight of the Cardinals’ broadcast operations for the ACC Network.

Klein, who grew up in Southside, Tenn., is married to the former Donna Graham. He has two sons: Alex, who attended UofL, with wife and Beth and his children Clark and Iris; and Brady, a graduate of UofL’s Speed School of Engineering, with wife Carly.