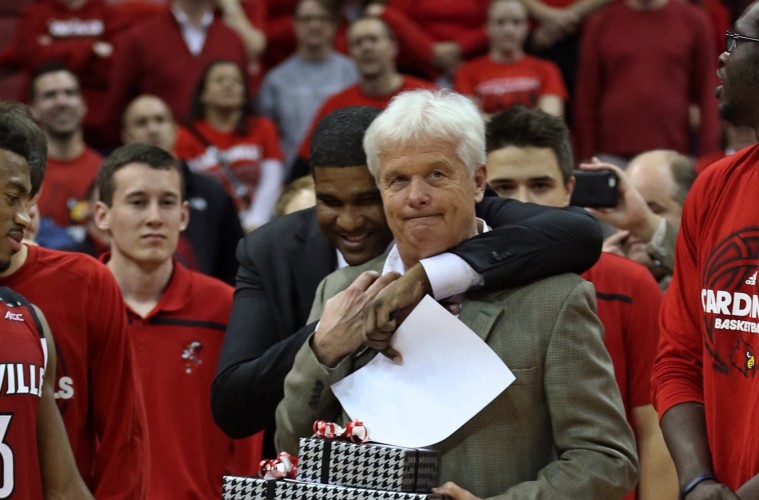 Kenny Johnson, an assistant men’s basketball coach at the University of Louisville for the past two years, has been elevated to associate head coach by UofL Head Coach Rick Pitino.

“Kenny is a five-star coach, five-star recruiter and a five-star person,” said Pitino.  “We want him to remain a part of our family for the coming years.”

“I believe in the integrity of Coach Pitino and it is an honor to continue to be a part of the program that he leads,” said Johnson, who signed a new two-year agreement with UofL.  “I love this program and what it means to so many great people.  Just as a legion of supporters have had our back and continue to have our back, so shall I have theirs.  L1C4.”

In Johnson’s first year on the staff in 2014-15, the Cardinals posted a 27-9 record, were among the top four teams in their first year in the ACC and reached the NCAA Elite Eight.  UofL’s 2015 recruiting class ranked among the nation’s top ten.  The Cardinals posted a 23-8 record this season, again finished in the top four of the ACC and rose to 16th in the final Associated Press poll after being unranked in the preseason.

When Johnson first arrived at UofL, Pitino challenged him with his personal fitness, as Pitino stressed having a highly-conditioned team and not asking players to do what the coaching staff was not willing to do themselves.  Johnson’s dedication was evident with a remarkable physical transformation when he lost 100 pounds in his first four months at UofL.

Johnson was an assistant coach and recruiting coordinator at Indiana University for two years prior to joining the Cardinals.  While at Indiana, Johnson helped the Hoosiers assemble two top 20 recruiting classes, including a top five class in 2013. On the court, Indiana produced a combined 46-22 record in his two seasons there, winning the Big Ten Championship, earning a No. 1 seed in the NCAA Tournament and reaching the NCAA Sweet 16 in 2013.

Johnson is recognized as a top recruiter on a national level.  After surveying more than 60 collegiate coaches, ESPN Insider, named Johnson as the nation’s 10th best recruiting assistant coach in a March 2, 2016 listing.  He has been the lead recruiter with 21 signed prospects in five years as a collegiate coach, including four All-American selections such as Troy Williams, Noah Vonleh and V.J. King.

Johnson served six years as assistant director and head of travel and logistics for the TeamTakeover AAU program and was the head coach of its 16 and under age group during that stint. The program produced a total of 53 Division I scholarship players during his stint there. His travel team tournament championships include the prestigious King James Classic (2009, 2010) and the Orlando National Super Showcase (2009).

In addition to his years as a camp coach at Eastern Invitational and Reebok Headliner Camp, Johnson was a guest clinician at the New England Basketball Coaching Clinic at Reebok Headquarters. He has also served as a camp and tournament director, beginning with the first Annual National High School Hoop Festival in 2007 and the first Annual DMV Basketball Coaching Clinic in 2008.

Johnson attended Oxon Hill (Md.) High School, where his playing career was cut short due to an injury in his second year of varsity basketball. As a senior at Oxon Hill in 1994, he was named Science and Technology Student of the Year. He earned his bachelor’s degree in cell, molecular biology and genetics in 1999 at the University of Maryland, where he was a Benjamin Banneker Scholarship recipient. He worked as a protein chemist/molecular biologist at Human Genome Sciences in Rockville, Md. after graduation.