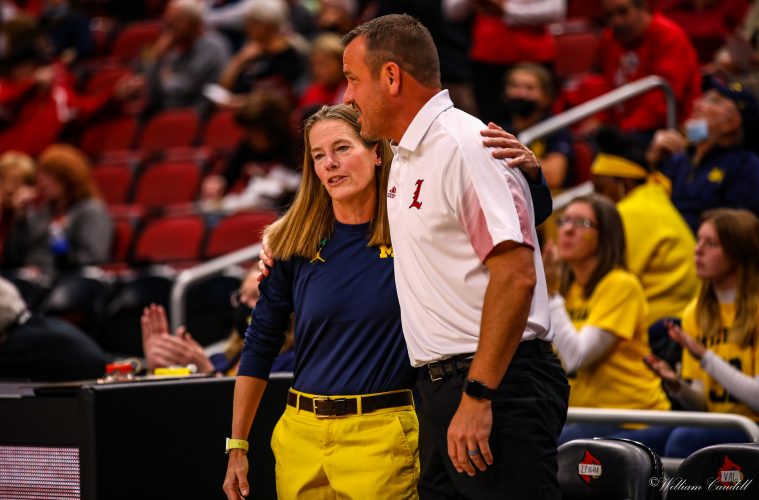 Following a 76-64 win over Tennessee on Saturday, top-seed University of Louisville women’s basketball squares off against 3-seed Michigan on Monday night with a trip to the final four on the line. The game will broadcast on ESPN and 790-AM WKRD.

Tickets are available at GoCards.com/MarchMadness.

Michigan advanced to the Elite Eight with a 52-49 win over South Dakota.

Louisville is in the Elite Eight for the fourth straight tournament, joining UConn as the only two programs to accomplish that feat. This is their sixth Elite 8 since 2013, which is tied for the second most appearances during that span. This is their seventh overall appearance in the Elite 8, all under head coach Jeff Walz, and they are 3-3 all-time. UofL is 1-2 as higher seed in Elite 8 games and 2-1 as lower seed.

Hailey Van Lith has put up 20 points in all three NCAA Tournament games, with 20 against UAlbany, 21 against Gonzaga and 23 against Tennessee. She is first UofL player to have three straight 20-plus point games in NCAA Tournament since Asia Durr had 27, 23 and 21 against Chattanooga, Tennessee and Baylor in 2017.

She has seven 20-point games this season and 10 for her career. She leads the team in scoring with 14.3 points per game, which is the highest her scoring average has been since she averaged 15.0 points after the first two games. She has led the team in scoring 14 times.

Several players contributed in the win over Tennessee on Saturday. Kianna Smith had 12 points and four steals. Chelsie Hall contributed nine points, all of which came in the third quarter, on 4-5 shooting. Olivia Cochran and Liz Dixon combined defensively to limit Tamari Key to just three points on 1-5 shooting. Payton Verhulst had seven big first half points on perfect 3-3 shooting. Mykasa Robinson didn’t score, but played tenacious defense and had two steals and two assists in 20 minutes.

Engstler leads the NCAA Tournament with 13 steals, ranks third with two double-doubles and her seven blocks rank fifth. Van Lith’s 53 field goal attempts are the most in the tournament, her 23 makes rank third and her 64 points rank fifth. Kianna Smith ranks sixth with 21 3-point attempts and ninth with seven 3-point makes.

UofL committed just seven turnovers against Tennessee, their fourth fewest ever in an NCAA Tournament game. They had just eight against Gonzaga, their sixth fewest.

Series History – Louisville is 5-1 all-time against Michigan and has won four straight. Three times in the past five seasons Michigan has visited the KFC Yum! Center. The Cardinals won 74-49 in the preseason WNIT semifinals on Nov. 16, 2017 and 71-50 in the NCAA Tournament second round on March 24, 2019. Prior to the past three meetings, the two teams had not squared off since Dec. 13, 1980, an 89-80 win for the Cardinals at Freedom Hall.

Last Meeting (Dec. 2, 2021) – Emily Engstler had 18 points and 14 rebounds, Kianna Smith added 17 points and the Cardinals used a 25-2 burst over the first and second quarters to run past No. 9 Michigan 70-48 in the Big Ten/ACC Challenge. Trailing 7-2, UofL scored 13 unanswered points, including consecutive 3s by Smith, for a 15-9 lead entering the second quarter before pulling away. A 12-0 run made it 27-9 just three minutes in as Michigan missed 12 of 13 shots during one stretch. Louisville scored the final nine points of the half for a 24-point cushion.