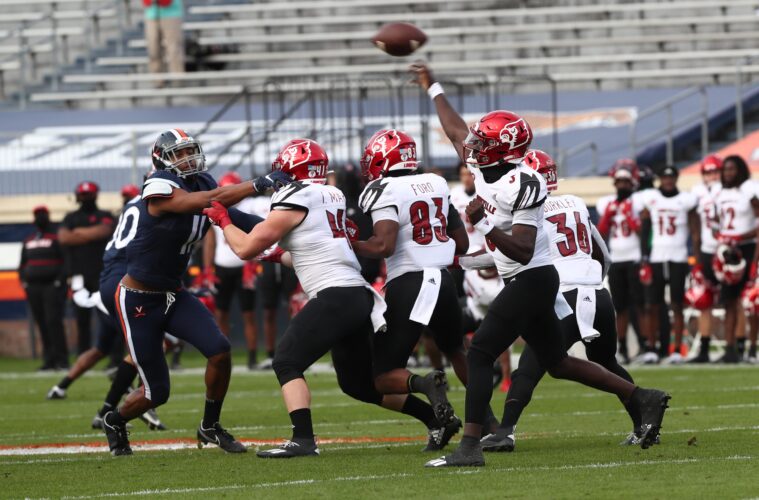 Jack Bicknell Jr., who owns 33 years of coaching experience at the NFL and collegiate level, has been named the offensive line coach at Louisville, head coach Scott Satterfield announced Monday.

“Jack brings a vast knowledge of experience at all levels of football, including the last four years in the SEC and time in the NFL,” Satterfield said. “He helped the New York Giants win a Super Bowl and has been a head coach at the collegiate level. He’s had great success coaching offensive lines and looking forward to seeing how he develops that group. I’m thrilled that Jack will be a part of our program.”

Before joining the Louisville staff, Bicknell spent the 2020 campaign in the Southeastern Conference tutoring the offensive line at Auburn, guiding the Tigers to the Citrus Bowl.

Prior to his brief stop at Auburn, Bicknell spent three seasons rebuilding the offense at Mississippi.

In 2019, the Rebels were one of the top rushing teams in the nation, finishing second in the SEC and ninth in the country in rushing averaging 251.2 yards rushing per game. The Rebels ranked 11th nationally in the 5.39 per carry average and scored 29 touchdowns on the ground. That season, quarterback John Rhys Plumlee averaged 113.7 yards rushing per game, good for first in the SEC and eighth nationally.

“This is a great thrill to come to Louisville and work for Scott Satterfield,” Bicknell said. “More important than that, he’s a tremendous person to work for and he truly cares so much about his players. I’ve done everything in coaching so it was important for me to be in a good fit and be around good people. Furthermore, Louisville has a great reputation and has a chance to win every year.”

Bicknell coached an offensive line in 2017 that protected Ole Miss quarterbacks and allowed them to throw for a conference-leading 328.4 yards per game (11th nationally). With assistance from the offensive line, the Rebels ranked second in the SEC in total offense (462.3 ypg) and sixth nationally in red zone offense (.953). Under Bicknell’s guidance, Little earned second team All-SEC honors in just his second season as a Rebel.

Before his time in the SEC, Bicknell spent eight seasons as the head coach at Louisiana Tech (1999-2006), where his 43 victories rank as the fourth-most in school history. Following the 2001 season, he was named WAC Coach of the Year after leading the Bulldogs to a conference championship in its first year of membership. Bicknell also served as the Bulldogs’ offensive line coach from 1997-98.

In 2014, the Dolphins produced 361 first downs, tied for the second-most in franchise history and most since 1985 when the team had the same amount.

Bicknell proved to be one of the best at the NFL level. He coached a variety of offensive lineman who found an abundant amount of success under his watch.

Despite missing the first four games of the season due to injury and making the switch to guard, Mike Pouncey was tabbed to his second-straight Pro Bowl in 2014. Tackle Ja’Wuan James became the eighth offensive lineman in Dolphins history to start all 16 games as a rookie, showing his versatility by starting nine games at right tackle and seven at left tackle en route to earning PFWA All-Rookie Team honors.

Bicknell came to Miami after spending the 2013 season as the offensive line coach for the Pittsburgh Steelers. While in Pittsburgh, Bicknell’s unit helped running back Le’Veon Bell amass 1,259 yards from scrimmage, the most by a Steelers rookie.

Prior to joining the Steelers, Bicknell served as the offensive line coach for the Kansas City Chiefs in 2012 where he directed a unit that was instrumental in helping running back Jamaal Charles return to All-Pro form after an ACL injury cut short his 2011 season.

Bicknell began his NFL coaching career with the New York Giants in 2009 and was a member of a coaching staff that helped lead the franchise to its fourth Super Bowl title with a 21-17 victory over the New England Patriots on Feb. 5, 2012. During the 2011 season, the Giants’ line anchored an offense that finished fifth in the NFL in passing while only allowing 28 sacks.

Bicknell began his coaching career at his alma mater, Boston College, as a graduate assistant from 1985-86. Following his two seasons with the Eagles, Bicknell joined the staff at New Hampshire in 1987 and spent 10 seasons with the Wildcats coaching the defensive line (1987-92) before moving to the offensive line (1993-96). Bicknell returned to Boston College in 2007 as the Eagles’ assistant head coach/offensive line coach for two seasons (2007-08) before joining the Giants in the NFL.

A three-year letterwinner as an offensive lineman, Bicknell played collegiately for his father at Boston College from 1981-85 where he was the center for 1984 Heisman Trophy winning quarterback Doug Flutie. It was Bicknell who snapped the ball to Flutie on the final play of the Boston College/Miami game which led to one of the most memorable conclusions to a game in college football history. The Flutie “Hail Mary” game-winning touchdown pass to wide receiver Gerald Phelan propelled the Eagles over the Miami Hurricanes in the 1984 Orange Bowl.

In Bicknell’s final season at Boston College, he was honored with the Scanlon Award, the highest honor bestowed upon a Boston College football player, the Scarminach Award for athletic and academic excellence and the Dean’s Award in the school of education.

Bicknell comes from a family of coaches. His father, Jack, was the head coach at Boston College (1981-90) prior to becoming the head coach of the Barcelona Dragons (1991-03) of NFL Europe.

He and his wife, Helen, have three children, John, Katelyn and Alyse.