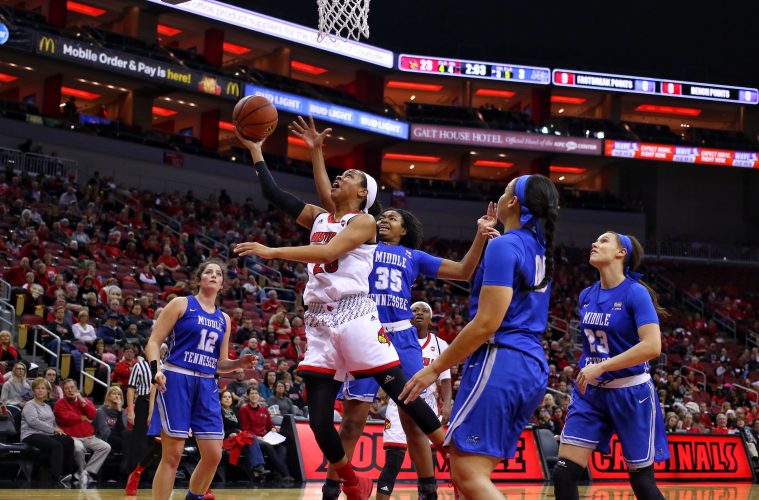 After seeing his No. 4 Louisville squad defend well in spurts, coach Jeff Walz wanted to see if his Cardinals could defend for a full game.

They did, and they almost set a record in the process.

Asia Durr scored 19 points in 20 minutes for the Cardinals, who crushed Middle Tennessee 80-26 on Saturday night.

Wrapping up a busy week in which they routed UT Martin and Vanderbilt, the unbeaten Cardinals lowered the boom on another team from Tennessee. A 28-1 first-quarter run put the game away early.

Walz said the Vanderbilt game, in which the Cardinals held the Commodores scoreless for more than a quarter, showed the capabilities of his team. On Saturday, they kept the Blue Raiders in single digits for all four quarters.

”I challenged them,” Walz said. ”I know we can do it. Now can we put three or four quarters together, and tonight, I thought we did.”

The Cardinals (11-0), off to their second-best start in program history, also had one of their best-ever shooting halves. Louisville shot 70.8 percent in the first half and 56.3 percent for the game. Bionca Dunham added 14 points on 5-for-6 shooting.

Durr also made 5 of 6 shots, including all four of her 3-point attempts. She said the defense set up the offense for easy baskets. The Cardinals made 13 of 15 field goals in one stretch.

”We really got out there,” Durr said. ”That really got us going in the first quarter.”

The Blue Raiders (5-3) were missing two starting guards because of injuries, which allowed Louisville to overwhelm the Middle Tennessee backcourt throughout the first half.

Thanks to Katie Collier’s free throw with 40 seconds left, Middle Tennessee scored just one more point than the fewest ever by a Louisville opponent. The Cardinals last held an opponent to 25 points against Tennessee State on Dec. 31, 2012.

Middle Tennessee: The Blue Raiders entered the game holding four of their first seven opponents below 50 points. Louisville, which capitalized on easy opportunities created by its pressure defense, reached that plateau with 2:46 left in the first half.

Louisville: For the fourth time this season, the Cardinals never trailed, this time against a team that featured several key players from last season’s 23-win squad.

Of the Cardinals’ 27 field goals Saturday, 26 of them came off assists. The other was a putback off an offensive rebound.

”It’s pretty remarkable,” Walz said. ”It’s the first time I’ve been a part of a ball game where every made field goal … was assisted on, except for an offensive board, which it’s not going to be.”

Dana Evans came off the bench to score 11 points for the Cardinals, and for the third straight game, the five-star point guard had six assists. She didn’t commit a turnover and got four steals in a team-high 26 minutes.

Evans, who earned McDonald’s All-American status last year, now has a better than 2-to-1 assist-to-turnover ratio for the season (49-to-24) and said she’s starting to get a feel for playing with her teammates.

”My job on the team is to play defense and get girls shots where they need it, like Asia (who) can hit the three,” she said.

Louisville won its three games this week by an average of 37 points. They trailed Notre Dame in the polls by just seven points and could make up ground on the Fighting Irish when Monday’s poll comes out. They could also rise if No. 11 Tennessee beats No. 2 Texas on Sunday.

Louisville concludes a four-game homestand when it hosts Tennessee State on Tuesday.