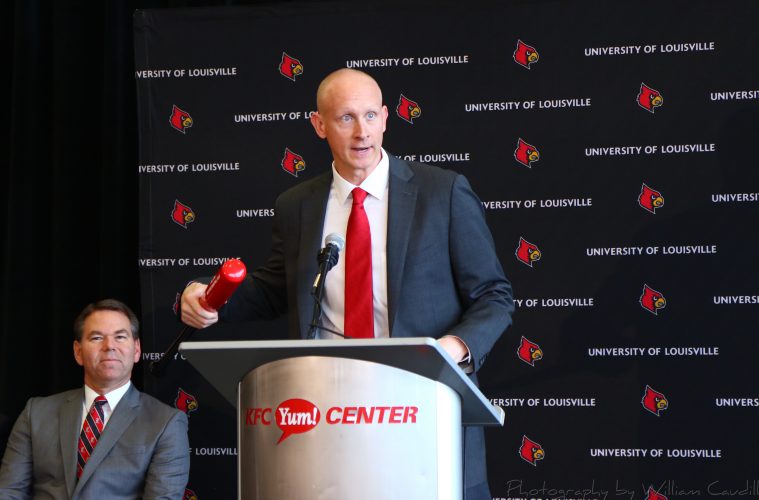 Murray has operated on college basketball staffs for the last 11 seasons at Xavier, Rhode Island, Towson, Wagner and Arizona.  During his three seasons at Xavier (2015-18), the Musketeers produced an 81-26 record (.757) and advanced in the NCAA Tournament each year.  Their 2017-18 squad achieved a 29-6 record, won Xavier’s first Big East Conference regular season championship, earned the school’s first-ever No. 1 seed in the NCAA Tournament and finished third in the final Associated Press poll.  In addition, Murray played a key role as the Xavier staff assembled three straight nationally-ranked recruiting classes.

“Luke Murray is a superstar,” said Mack. “No detail goes unnoticed with Luke. Whether it’s working with our perimeter players, scouting, or recruiting, Luke excels. He’s one of the most organized, detailed and high-energy recruiters that I’ve ever been around. He carries the role of recruiting coordinator on the staff and allows us to leave no stone unturned when searching for the next University of Louisville great.

Murray worked two years at Rhode Island under current Connecticut coach Dan Hurley (2013-15), including the 2014-15 season when the Rams finished 23-10 overall, tied for second in the Atlantic 10 Conference and earned an NIT berth.

Preceding his time at Rhode Island, Murray spent two seasons (2011-13) as an assistant coach at Towson under Pat Skerry.  In 2012-13, he helped Towson orchestrate of one of college basketball’s greatest turnarounds as the Tigers set an NCAA record for the best one-season improvement, rising from a one-win campaign in 2011-12 to an 18-13 mark and a second-place finish in the CAA in 2012-13.  He was an integral part in attracting the top-rated recruiting class in the CAA for 2012-13, including 2013 and 2014 CAA Player of the Year and former Utah Jazz forward Jerrelle Benimon.

Murray was an assistant coach for the 2010-11 season under Hurley at Wagner College in Staten Island, N.Y. In the 2009-10 season, Murray served as a graduate assistant on the Ari¬zona staff under former Xavier head coach Sean Miller, while working on his master’s degree in educational psychology. Murray broke into the collegiate coaching field as the director of basketball operations at Quinnipiac in the 2007-08 season.

A native of Palisades, N.Y., Murray earned a degree in sociology from Fairfield in 2007.  He and his wife, Kara, have one son Luke Jr., who was born in October 2017.

During Pegues’ six seasons at Xavier (2012-18), the Musketeers produced a 142-67 record (.679) and advanced to the NCAA Tournament on five occasions, reaching an Elite Eight and Sweet 16.  Xavier’s  2017-18 squad achieved a 29-6 record, won Xavier’s first Big East Conference regular season championship, earned the school’s first-ever No. 1 seed in the NCAA Tournament and finished third in the final Associated Press poll.

“Mike Pegues is one of the best post coaches in the country,” said Mack. “He does a terrific job of teaching footwork, positioning and understanding of the game.  Having been with me for the past six seasons, it’s been impressive to see the development of big men during Mike’s tenure. Our players will love his energy, IQ for the game and his sincerity. His relationships with coaches around the country have allowed us to recruit from some of the best high school programs in the nation.”

Before his arrival at Xavier, Pegues spent two seasons as an assistant coach at his alma mater, Delaware, under head coach Monté Ross. Delaware finished 18-14 in Pegues’ final season, including a 12-6 record in the CAA.   Pegues served as video coordinator at Virginia Commonwealth during the 2009-10 season, helping the Rams to a 27-9 record and the Collegiate Basketball Invitational title.

Pegues had a stellar collegiate career at Delaware, where he earned a degree in communications in 2000.  The all-time leading scorer in Delaware men’s basketball history with 2,030 points, Pegues led the Blue Hens to two NCAA Tournament appearances while playing under former UD head coach and current Notre Dame head coach Mike Brey from 1996-2000.  He was a two-time All-District selection and a 2000 CoSIDA Academic All-American and became the first UD men’s player to be named the America East Conference Player of the Year as a junior. He was inducted into the UD Athletics Hall of Fame in 2007.

He played professionally in Italy, New Zealand, England and Argentina, as well as one season in the Continental Basketball Association. After suffering a knee injury, he returned close to home to teach at Friendship Collegiate Academy in Washington, D.C. He served as an assistant coach for three seasons at Bishop O’Connell High School under Joe Wooten, son of legendary high school head coach Morgan Wooten. He also coached the DC Assault AAU squad.

Gaudio has most recently served as a basketball analyst for ESPN for the past eight years, but has 23 years of collegiate coaching experience and has previously worked with Mack.

“Dino Gaudio is a home run for us,” said Mack. “He’s trusted, loyal and a person that I have always looked up to in this profession. Not many head coaches have the luxury of having a former head coach in the ACC on staff. Dino’s role on the floor coaching our players will be immense. Our players will benefit in ways that other staffs can’t duplicate. I’m excited to get him out of the studio and on to the basketball court where he belongs.”

In three seasons as the head coach at Wake Forest (2007-10), Gaudio guided the Demon Deacons to a 61-31 overall record and a pair of NCAA Tournament appearances.  His 2008-09 team opened the season with a program-best 16-0 start as the last unbeaten team in the nation, finished second in the ACC behind 2009 NCAA Champion North Carolina (who Wake Forest beat that season), and rose to the nation’s top-ranked team before finishing 12th in the final Associated Press poll.

In 2010, despite losing two players to early entry in the NBA Draft, Wake Forest won 20 games – including all five of its overtime games that season — and reached the NCAA Tournament.  He was twice recognized by a media organization as the ACC Coach of the Year, achieving that honor by Rivals.com in 2008 and CBSSports.com in 2009.

In his nine seasons at Wake Forest (2001-10), including six years as associate head coach and three as its head coach, the Demon Deacons compiled a 187-99 record, participated in six NCAA Tournaments and all 21 Demon Deacon seniors graduated. The only players in nine years who did not graduate were Chris Paul, Jeff Teague, James Johnson and Al-Farouq Aminu, all who were first-round NBA draft selections after their sophomore seasons.  While at Wake Forest, secured a pair of top 15 recruiting classes, including the 2008 class that was rated third in the nation.

It was in the first three years at Wake Forest (2001-04) when Gaudio and Chris Mack were united under the late head coach Skip Prosser.  Mack left to be an assistant coach at Xavier.

At Army, Gaudio inherited a team that had gone just 4-22 the year before his arrival. In his second year, Gaudio led the Black Knights to a 12-16 record. Gaudio helped the Knights win the only two Patriot League Tournament games in the school’s 17 years of membership in the conference.  After his stint at Army, Gaudio was named the head coach at Loyola in 1997 and posted 12 wins in his first year and 13 in his second. The 25 victories in his first two campaigns marked the best start by any Greyhound coach over the previous 26 seasons.

Gaudio broke into the college ranks at Xavier, serving as an assistant coach for six years under Pete Gillen (1987-93).  In six years, Gaudio helped the Musketeers to a 136-49 record, five 20-win seasons and five NCAA Tournament berths. Xavier won four Midwestern Collegiate Conference regular season crowns, three MCC Tournament titles and made the school’s first trip to the NCAA Sweet 16 in 1990.  He later returned to Xavier as an assistant under Skip Prosser in 2000-01 before moving to Wake Forest.

A native of Yorkville, Ohio, Gaudio and his wife, Maureen, have two adult daughters, Kaylan and Alyssa.