Bracketology begins right after One Shining Moment ends on the 1st Monday in April each year.  That’s too early.  But seeding a field of 68 for the NCAA Tournament and using the selection criteria that the NCAA Selection Committee uses is a tough job.  Trust me…I’ve tried.

With that said Joe Lunardi of ESPN and Jerry Palm of CBS do their level best to keep college basketball fans appraised of where their favorite team stands in the NCAA Tournament.  Right now Lunardi has the Cards as a #5 seed in the Midwest Region playing Wofford in the 1st round in Jacksonville, FL.  Jerry Palm also has Louisville in the Midwest Region in Jacksonville but as a #4 seed playing Harvard.

What is interesting is that both Palm & Lunardi believe that the NCAA Selection Committee will place the Cards in the Midwest (Cleveland Region) which is assuredly the same region, once again, as Kentucky and would set-up another Sweet 16 match-up between the Cards and Cats.

Personally,  I think the NCAA Selection Committee has heard the criticism two years in a row of a watered-down West Region and will do its best to pack the Staples Center in Los Angeles, CA with top teams.  Not great for travel for Louisville fans, but it’s the same formula that saw the 2005 & 2012 teams make a run to the Final Four.

In addition to laying out the match-ups I’ve also included RealtimeRPI data which suggests that Louisville really is on the #4/#5 line right now, ranked #16.

The KPI Data suggests that the Cards are more in line with the #4 seed but they do have some worrisome data that might drop them lower, like being 3-5 vs. the Top 50 and 3 losses at home.

Ken Pom also puts the Cards in the #4 line with the #6 Defense in the Nation, and the #84 offense.

It’s a lot of data, but hopefully we can begin to appreciate and understand the job the committee has.  Right now I feel like the Cards are a #4 seed, but could certainly play down to a #5, or up to a #3. 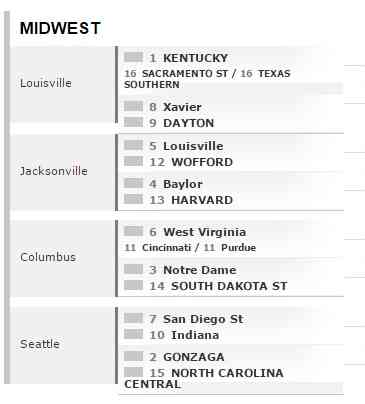