The rest is up for grabs. The Cards currently sit in the #4 position with a double-bye that the Top 4 seeds earn. If the Cards can beat Notre Dame tonight they have a CHANCE to earn the #3 seed by beating Virginia on Saturday. First things first. There are a lot of important games tonight that will determine seeding and end of season opportunities. It’s a big night. 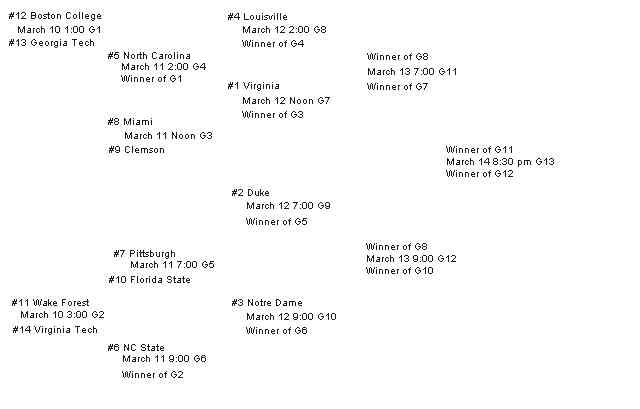 I. When two teams are tied in the standings, regular-season head-to-head results are used as the tiebreaker.

II. If the two tied teams split their regular season games, the tie is broken by comparing each team’s records against the team occupying the highest position in the standings, and then continuing down until one team gains an advantage.

III. If three or more teams are tied, the combined record of each team against the other two teams involved is used to break the tie. After this procedure, if two teams remain tied, procedure 2 is followed.

IV. If procedures 2 and/or 3 fail to establish an advantage, a coin flip to break the tie will be conducted by the commissioner after the final regular-season game before the conference tournament.