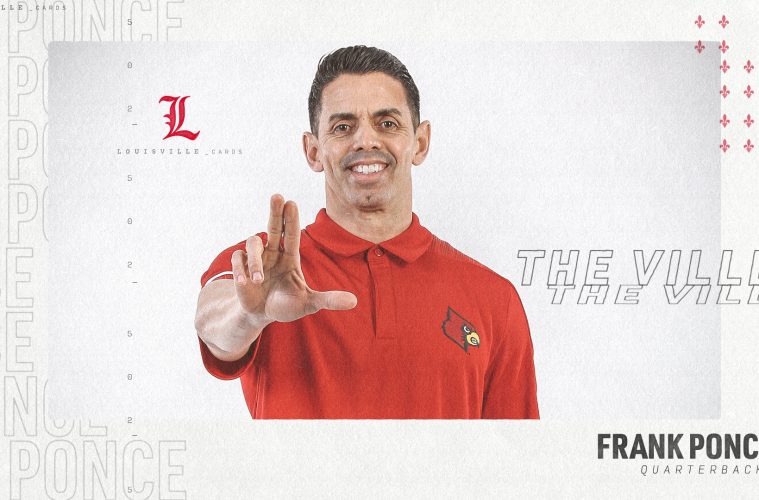 Regarded as one of the top recruiters in the state of Florida, Frank Ponce has joined the University of Louisville football staff, head coach Scott Satterfield announced Wednesday. Ponce, who comes to Louisville after six successful seasons as the co-offensive coordinator/passing game coordinator at Appalachian State, will serve as the quarterbacks coach for the Cardinals.

“Frank Ponce is an outstanding football coach and I’m thrilled he is joining our staff,” Satterfield said. “He is a great teacher of the game and a brilliant recruiter. He has terrific ties in the state of Florida after serving as a prominent head coach in south Florida area for 16 seasons and has established terrific relationships in a critical area for our recruiting efforts.

“During his tenure at Appalachian State, Ponce was instrumental in producing solid, productive quarterbacks, including Taylor Lamb, who was the winningest players in school history. He brings a wealth of experience within our offense and will be a welcome addition to our offensive staff.”

Ponce’s six seasons as Appalachian State’s co-offensive coordinator and quarterbacks coach coincided with a resurgence for the Mountaineers. Over that span, Ponce spearheaded an improved offense that finished with a 50-24 record and three consecutive Sun Belt championships.

Appalachian State ranked 15th nationally in rushing offense in 2018, while ranking 20th in scoring offense. The Mountaineers scored 30 or more points in nine games, including a season high 72 points versus Gardner-Webb and 52 against South Alabama. In assisting with a potent running attack, Ponce’s offense totaled nine games of rushing for over 200 yards, posting an average of 230.6 yards a game over the last five contests.

Ponce tutored Sun Belt Offensive Player of the Year Zac Thomas to a stellar statistical season in his only year as the starter. Thomas led the league in QBR (No. 12 FBS, 79.3), yards per pass attempt (No. 30 FBS, 8.1) and yards per completion (No. 37 FBS, 12.93). With TD runs of 25 and 35 yards in the Sun Belt title game pushing his season total to 10 rushing TDs, the 11th-best mark among FBS QBs, he is 63-of-97 passing for 717 yards with 11 total TDs (seven passing) and no INTs since returning to the lineup after missing four games with an injury.

In 2017, Ponce helped groom Taylor Lamb, who finished his career as the school and Sun Belt leader in touchdown passes with 90. The only FBS quarterbacks in 2017 with career totals of at least 9,000 passing yards and 2,000 rushing yards were Lamb, Ohio State’s J.T. Barrett and Heisman Trophy finalist Lamar Jackson.

With 27 touchdown passes and six interceptions as a senior, Lamb had the second-best season for an Appalachian State quarterback in terms of touchdown-to-interception ratio. He ranked 15th nationally in passing efficiency (152.2), 17th in passing touchdowns (27) and 20th in point responsibility (192).

Lamb led the conference in passing efficiency two years straight and was fourth as a junior, last season, despite a group of young wide receivers. In 2015, Lamb ranked third among all freshman in the NCAA Division I FBS, he ranked No. 10 nationally with a 160.7 pass-efficiency rating and was the highest-rated sophomore. Working with Ponce, Lamb has set several Appalachian State records, including freshman passing yards (2,381) and touchdown passes (17) by a freshman during his Sun Belt Freshman of the Year campaign and, in 2015, most touchdown passes in a season (31).

Leading Appalachian State to an 11-2 record, Ponce’s potent aerial attack led the the Sun Belt in passing efficiency (163.2), which stood seventh-best nationally, en route to the No. 2 best red zone offense in the conference.

In his first season at Appalachian State (2013), Ponce directed the Southern Conference’s No. 2-ranked passing game (271.8 ypg). He also oversaw the development of quarterback Kameron Bryant, who came into the season with just 13 snaps under his belt yet set school records for single-season completion percentage (.712) and passing yards by a sophomore (2,713) despite not making his debut as a starter until the fifth game of the season.

Ponce arrived in Boone, N.C. after six seasons (2007-12) as the wide receivers coach at Florida International, where he worked with Satterfield for the two seasons that Satterfield served as FIU’s offensive coordinator (2010-11).

Ponce coached six of the top 10 receivers in FIU history during his six seasons with the Golden Panthers. His most notable pupil at FIU was three-time all-American T.Y. Hilton, who went on to be a third-round NFL Draft pick and has enjoyed a tremendous pro career, catching 493 passes for 7,813 yards and 40 touchdowns in seven NFL seasons. He also mentored Greg Ellingson, a long-time Canadian Football League star, who has caught 416 passes for 6,095 yards and 36 touchdowns.

Ponce was also celebrated for his recruiting ability during his time at FIU and was honored by ESPN.com as the Sun Belt’s top recruiter in 2010. During his tenure at FIU, the Golden Panthers’ recruiting classes ranked among the top three in the Sun Belt five times, according to Rivals.com.

Prior to his time at FIU, Ponce was one of the top high-school coaches in south Florida, serving as the head coach and offensive coordinator at Miami Senior from 2004-06 and head coach at Coral Reef from 2002-03.

A native of Miami, Ponce was a standout quarterback at Miami Senior, where he was team MVP, honorable-mention all-county and a finalist for the 1988 Miami Herald Hispanic Athlete of the Year award. He went on to be starting quarterback at Arizona Western College in 1989 and ’90, where he earned an associate’s degree in arts in 1990. He received a bachelor’s degree in physical education from Florida International in 1997.