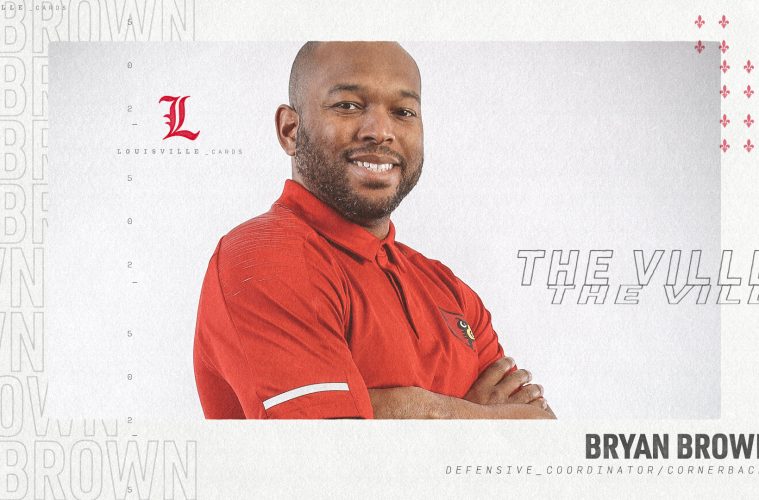 The architect of one the nation’s top defenses last season, Bryan Brown has been named the defensive coordinator at the University of Louisville, head coach Scott Satterfield announced.

After six seasons as the cornerbacks coach at Appalachian State (2012-17), Brown was promoted into the defensive coordinator position with the Mountaineers where he tutored one of the top defensive units in the nation.

“Bryan Brown is a young, upcoming star coach,” head coach Scott Satterfield said. “He’s an excellent recruiter who knows how to develop relationships with all the players. Defensively, his defense was ranked in the top 10 of many different categories. He’s well-respected among his peers and he will do a great job for us.”

In leading the Mountaineers to their third-straight Sun Belt title, a 10-2 record and a fourth consecutive bowl appearance, Brown’s defense ranked sixth nationally in scoring defense at 15.7 points per game, holding the opposition to 10 or fewer points in seven contests. Brown’s unit also ranked third in the country in passing defense (148.1) and sixth in total defense (279.3).

Last year, Brown’s group picked off 15 passes, ranking 14th in the nation, while the Appalachian State defense finished 2016 with 20 interceptions, the sixth-most in the FBS, and was No. 11 nationally in pass efficiency defense.

Brown trained Clifton Duck, one of the top cornerbacks in school history, and helped him become one of the team’s most decorated players. Duck led the Sun Belt Conference in interceptions with six in 2017, which was tied for fourth most in the nation, and was a two-time All-Sun Belt first team performer, a freshman All-American and the league’s 2016 freshman of the year.

Additionally, at least one of Brown’s pupils has ranked among the conference’s top 10 in interceptions during each season of his tenure. Duck was first and Tae Hayes tied for fifth in the league in 2017.

Both Duck (fourth) and Mondo Williams (seventh) finished in the top 10 in 2016, while Latrell Gibbs led the Sun Belt Conference in interceptions with seven total for 149 yards and two touchdowns in 2015. Gibbs’ efforts garnered him recognition on the all-Sun Belt first team.

Also under Brown’s tutelage, Demetrius McCray led the Southern Conference with four interceptions in 2012. McCray went on to join the National Football League as a seventh-round draft pick of the Jacksonville Jaguars in 2013.

Brown came to Appalachian State from Ole Miss, where he helped as a graduate assistant coach for the Rebels, working specifically with the nickel back position. In that role, he was responsible for all practice planning and game planning for the nickel back spot.

While at Ole Miss, he also served as an administrative assistant for the defensive coordinator, assisting with all aspects of practice and game planning for the squad’s cornerbacks.

Brown served in a player development role at Rutgers in 2008, assisting the Scarlet Knights’ special teams units while also supporting in academic support services for the program.

Following the stint at Rutgers, he spent one season at Delta State (2009) as a graduate assistant coaching the Statesmen’s cornerbacks.

A native of Corinth, Miss., Brown was a four-year letterwinner as a defensive back at Ole Miss from 2003-06. He made 70 tackles in his career and returned one interception for a touchdown while also returning kickoffs and punts.

Brown earned a B.A. in sociology from Ole Miss in 2006. He and his wife, Courtney, have a daughter, Elle, and a son, Bryson.