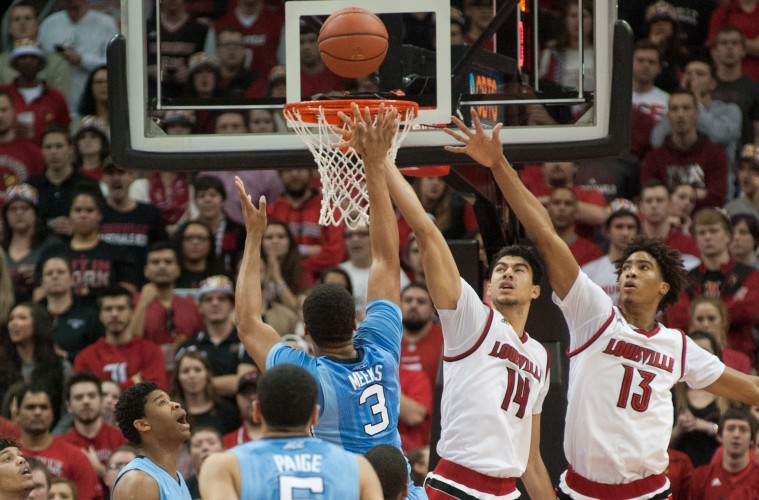 What a difference a little over 48 hours can make. After looking disjointed, disorganized and just bad  #19 Louisville turned the tables Monday night. Louisville hung on for a 71-65 win over North Carolina at the KFC Yum Center.

Before an enthusiastic crowd of 22,781 the 19th ranked Cardinals (18-4, 7-2) used superior defense and rebounding against the bigger #2 Tar Heels.

Louisville which changed between man to man and zone defenses, held the Tar Heels (who average 85.8 points per game and lead the Atlantic Coast Conference in scoring) to its lowest point total of the season.

“I just told our guys, I know you are disappointed (after Virginia loss), but when adversity hits and your on the mat you don’t get judged by falling down, your going to fall down a lot in your life. Its how you get up,” said Pitino. “You’ll be judged tonight with this basketball game on how you get up collectively and individually. I thought our guys defensively and rebounding wise got up in a big time way. I’m real proud of them.”

Louisville held North Carolina to 34.5 percent (20 of 58) field goal shooting and 3 of 17 three from three point range. The Cardinals out rebounded the Heels 41-39 and forced 16 turnovers.

“I knew when I got up this morning we were going to win the game,” said guard Trey Lewis. “I know what kind of competitors we have on this team.”

Damion Lee led the Cardinals with 24 points on eight of 12 shooting from the field and made all four of his free throws and had five rebounds.

Louisville led much of the second-half started to get a little wobbly down the stretch. Ray Spalding scored on a layup with 4:29 to play for a 65-57 advantage. But North Carolina cut the deficit to 67-65 with 35 seconds remaining on two free throws by Joel Berry. But four free throws, two each by Lewis and Lee staked the Cards to a six point lead with eight seconds.

“We were focused and stayed focused thought out the whole game,”said Chinanu Onuaku. “We learned we are still one of the best teams in the country we can play against anybody.”

Onuaku finished with 12 points and 10 rebounds despite playing only 23 minutes because of foul trouble. “We did a great job of keeping them from getting out in transition,” said Onuaku.

Louisville’s statistics weren’t glossy either. The Cardinals shot 43.3 percent (26 of 60) and made five of 14 three point shots. Donovan Mitchell gave the Cardinals a lift off the bench with 10 points and five rebounds.

“It was a tough night for the guys in blue,” said North Carolina coach Roy Williams whose Tar Heels are 0-2 in the Yum. “Their sense of urgency was a little bit better than ours. We never could get the ball to the basket.”

One of the most important parts of the game was limiting Carolina’s fast  break opportunities. The Heels had only six fast break points.

“That’s not the way we play when I look down and see six fast break points,” said Williams. “Our big guys didn’t move around as much as they needed too.”

Carolina came in with five starters averaging between 16.8 points and 11.8 points a game. Justin Jackson had 16 and Brice Johnson 15 points and 11 rebounds.

It wasn’t pretty, but neither was a loss to Virginia. This was a game Louisville had to have. “We hadn’t beaten a ranked team, so it was huge,” said Lee.

It’ll go a long way in helping the Cards down the road.