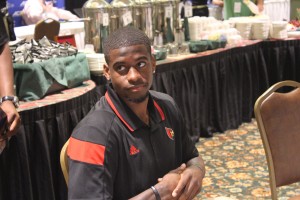 Late Friday Night the University of Louisville released a statement noting that Devante Parker injured his left foot in practice. The statement went on to say that Parker will visit Dr. Bob Anderson in Charlotte, NC over the next days. To this point, nothing else has been released by the University. So anything else you may hear would probably be mere speculation.

Dr. Bob Anderson is a Orthopedic doctor who treats foot and ankle injuries. He has treated numerous top NFL players including Hakeem Nicks and Julio Jones, as well as baseball star Derek Jeter.

Sending out a press release late on Friday night would make me believe that the Louisville staff believe this to be a serious injury. Obviously it goes without saying that Devante Parker may be Louisville’s top talent. But the one saving grace with this injury also may be that Louisville’s deepest position is Wide Receiver.

We will continue to monitor the situation.