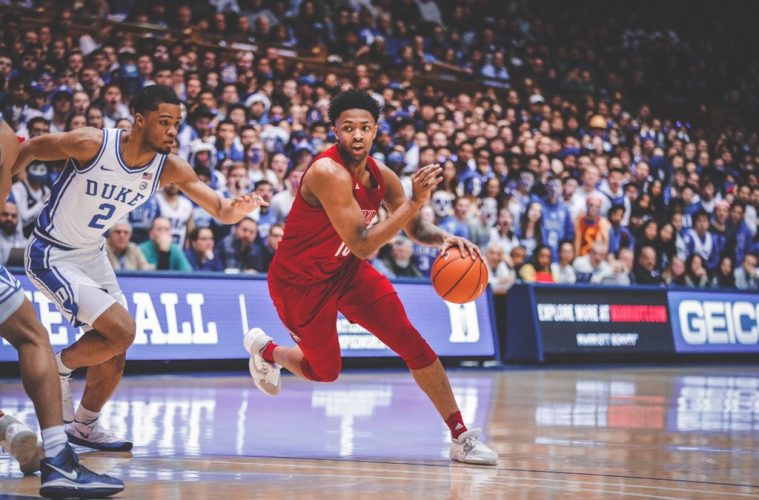 The Louisville Cardinals traveled to Durham, NC and beat the Duke Blue Devils 79-73 inside Cameron Indoor Stadium for the first time since 1983. Louisville got out to a hot start and kept rolling throughout the 1st half as David Johnson scored 17 of his 19 points in the first 20 minutes of the game and went into halftime with a 42-32 lead.

Chris Mack joked with ESPN’s Holly Rowe at halftime, “I can’t see anyone blowing a lead against Duke, can you?” Mack referenced the game in the post-game and said it was the toughest loss of his career.

This was a game that Louisville had to hit the glass and create problems vs. Vernon Carey, Jr. in the post. Malik Williams did that job. Malik Williams finished with 12 points, 7 rebounds in 25 minutes and was a warrior down the stretch. Malik also hit critical free throws in the games final moments and threw down an emphatic dunk to seal the victory.

DJ did a bit of everything, deflections, blocks, 7 assists! But down the stretch of the game David did suffer a shoulder/wrist/left arm injury that left the city of Louisville holding its breath. Luckily the rest of the Cardinals (who traveled to Durham without Aidan Igiheon due to the flu) were able to pull out the victory.

Jordan Nwora struggled from the field (3-12) and Dwayne Sutton was haggled with foul trouble but the Cards got huge plays from Ryan McMahon, Fresh Kimble & Samuell Williamson that made incredible differences.

Duke got a very friendly whistle (typical) inside Cameron Indoor Stadium and shot 29 free throws. Still Duke Coach Mike Krzyzewski took exception for how the game was called in his post-game:

“So we were a prelim to the fight tonight (on ESPN in referencing the Conor vs. Cowboy fight). That was a brutal game. The most physical game we’ve been involved in in years. They’re good. Johnson is terrific. They outplayed us the first 10 minutes. Then our kids fought like crazy. The term freedom of movement was not in use tonight. It’s just not good basketball. They played great tonight. I don’t want to take away from them, but tonight was not the way it should be. Doesn’t mean they wouldn’t beat us if it were some other way. It was like an early 90’s Pistons-Bulls game. It was unbelievable. . . . I’m not a sour grapes guy. Give them credit. I’m just saying, the game shouldn’t be that way. There should be freedom of movement. They did what they did better than we did.”

This game was a HUGE win for the Louisville Basketball program who is now tied for #1 in the ACC with Florida State. The Noles own the tie-breaker over the Cards as FSU came into the Yum! Center earlier this month and got the best of Louisville. Louisville will travel to Florida State on February to try to even out this season’s series vs. FSU. Until then the Cards will come back home after playing (and winning) its last 3 games on the road and will play Georgia Tech Wednesday night in the KFC Yum! Center.