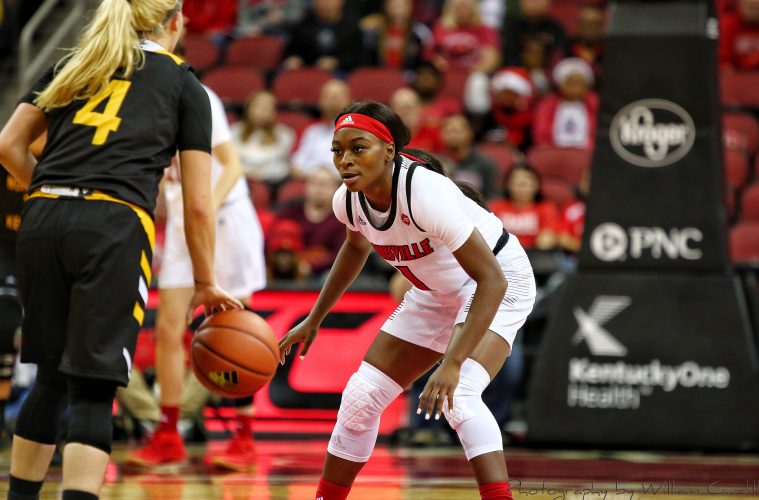 On a day celebrating their past, the University of Louisville women’s basketball team exhibited their promising present with a 92-59 victory over Northern Kentucky in their home non-conference finale Saturday afternoon at the KFC Yum! Center.

Sophomore guard Dana Evans led all scorers with a career-high 21 points on 6-of-8 shooting along with a team-high six assists and four steals. Junior forward Kylee Shook turned in her first double-double of the season with 15 points and 11 rebounds, while senior forward Sam Fuehring also tallied 15. Senior guard Asia Durr once again reached double-figures with 11 points, while redshirt senior guard Arica Carter matched a career high with seven boards.

The Cardinals (11-0) opened the game in strong fashion, building a quick 11-2 lead in the first three minutes of play. Powered by drives to the rim, the Cards took advantage of their opportunities at the foul line, going 8-9 in the first half as they amassed a 51-24 lead at halftime.

At halftime, UofL honored the 2008-09 squad, which reached the first national championship game in program history. Led by four-time All-American Angel McCoughtry, most of the team was in attendance and received strong applause from the KFC Yum! Center crowd. Head coach Jeff Walz concluded the ceremony with short remarks to the crowd and thanked his former players for buying into his program.

The Norse (1-6) began to cut into the deficit after halftime, outscoring the Cards, 21-15, in the third quarter with strong play at the bucket. For the game, NKU outrebounded Louisville, 39-33, led by 11 from sophomore forward Kailey Coffey. Despite the comeback, the Cards’ lead never dipped below 18, eventually leading to a 10-2 Louisville run to close the game.

The Cardinals will now head north to close out non-conference play against Sweet 16 participant Central Michigan on Thursday at 7 p.m. Following the holidays, the Cards will open ACC action against North Carolina on Thursday, Jan. 3 at 7 p.m. at the KFC Yum! Center.