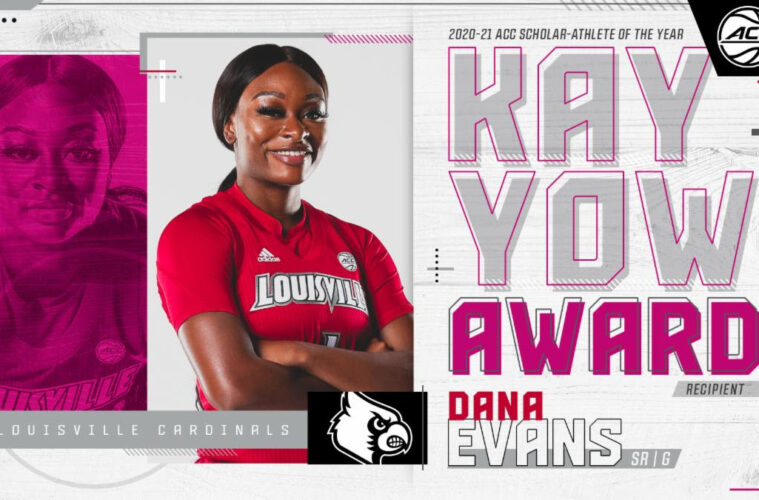 The ACC women’s basketball Scholar-Athlete of the Year award is named in memory of the legendary Yow, who won 737 games as a head coach while directing NC State to four ACC Tournament championships and the 1988 U.S. Olympic Team to a gold medal. Yow, who passed away in January of 2009, is also remembered for her leadership and courage in her fight against breast cancer.

Evans leads the ACC in scoring with 21.0 points per game and has tallied 17 20-point games in 23 contests for the Cardinals this season. Her scoring average is the sixth best for a Power 5 Conference player. Evans has scored in double figures in 40 consecutive games, which is the longest streak at UofL in the last 20 years. The senior has been terrific from the free-throw line, connecting on 93.8% of her attempts to lead the ACC and rank second nationally.

Evans is a finalist for the Ann Meyers Drysdale Award (the nation’s top shooting guard), the Senior CLASS Award and is a semifinalist for the Naismith Trophy. She is earning her undergraduate degree in sport administration.

“I’m thrilled that Dana has been named the Kay Yow Scholar Athlete of the Year,” said Louisville head coach Jeff Walz. “Beyond Dana’s obvious talent on the basketball court, she has been named to the Dean’s List multiple semesters, has been on the ACC Honor Roll every year and will be the first in her family to earn a college degree. I know Coach Yow would be proud, as are we. Congratulations Dana!”

Louisville and NC State tied for the conference lead with five selections each, while Florida State, Notre Dame and Wake Forest each placed four student-athletes on the team. Nine student-athletes earned the honor for the second time.

ACC Scholar-Athlete of the Year awards were established in September 2007 to be awarded annually to the top junior or senior student-athlete in their respective sports. Candidates for the awards must have maintained a 3.0 grade point average for their career as well as a 3.0 for each of the last two semesters. The award is based 60 percent on academic achievement and 40 percent on athletic accomplishment.

The ACC Honor Roll, which recognizes all conference student-athletes with a grade point average of 3.0 for the current academic year, will be released in July.