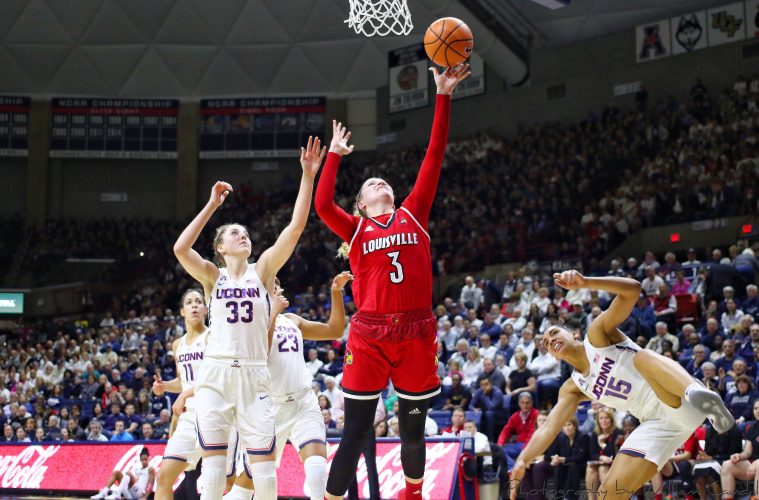 Connecticut landed a big early punch and Louisville could not recover.

Louisville (25-2) scored the first three points and then UConn rattled off 19 straight.

”We defended them about as well as we wanted to and that was the plan going in,” Auriemma said. ”We executed it and that led to a couple easy things. At the other end on offense, we just were really sharp on the offensive end. When you combine those two things. The way we play on defense and executed on offensive end that’s how you got what you got.”

Samuelson had seven points during that game-changing run. By the time Jazmine Jones’ reverse layup went in just before the end of the first quarter, the Cardinals were down 22-6 much to the delight of the sellout crowd of just over 10,000 fans.

”We had good shots there in the first quarter and we missed,” Louisville coach Jeff Walz said. ”I thought we took some that were too quick that led to transition for them. That’s something you can’t do.”

It didn’t get much better for Louisville in the second quarter as the team trailed 42-22 at the half. Samuelson had 19 points at the break.

”She’s got it going right now. She’s been like that at practice,” Auriemma said. ”She just had this feeling and look when I talked to her that today was going to be a really good day for her.”

Louisville was only able to get within 11 in the final 20 minutes. Every run the Cardinals tried to make in the second half, Samuelson was there to answer it. She finished short of her season-high 33.

”No team, especially in March is going to give up once halftime hits,” Samuelson said. ”So, knowing that and if we do get up, knowing how to keep the pressure on and be able to slow the game down, being able to get the right shot is going to be the biggest thing for us to figure out.”

Asia Durr missed her first five shots before finishing with 20 points to lead the Cardinals. Myisha Hines-Allen finished with 13 points and 12 rebounds for her 13th double-double of the season, while Arica Carter had 12 points on 4-of-8 shooting from beyond the arc.

UConn: The Huskies have won the last 17 meetings with Louisville with the lone loss in the series coming in the first meeting in 1993. Only two of the past 16 games had been decided by single digits.

UConn associate head coach Chris Dailey was announced as an inductee to the Women’s Basketball Hall of Fame at halftime. The longtime assistant got a warm ovation from the crowd when the public address announcer told the crowd at the half.

Louisville: at Boston College on Thursday. The Cardinals will stay in the area instead of flying back to Kentucky.