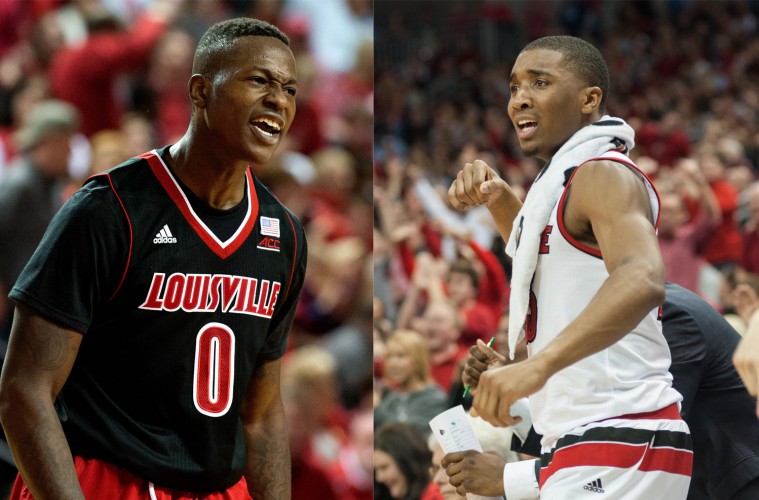 Donovan Mitchell had a promising freshman year as did Terry Rozier in 2013-14.  They are both Shooting Guards in Rick Pitino’s system but they are different in a lot of respects.  However, if you look at Rozier’s overall production in 2013-14 as a freshman and compare that to Donovan Mitchell’s production in 2015-16 there are a lot of reasons to be excited about Mitchell’s sophomore season to come.

Rozier was the 16th selection in the 2015 draft.  Terry built on his freshman year and was in incredible physical condition.  Rick Pitino has stated that he would like to see Donovan get down to 190-195 pounds for next season.  Donovan Mitchell played at 6’3, 210 lbs as a freshman, while Terry Rozier finished his career as a Cardinal at 6’2, 190.

If Donovan can reduce his weight, he will certainly be able to become a better defender (which you will see needs to happen from the numbers below).  Rozier was a defensive dynamo and his physical condition was on full display during the 2015 NBA combine.  Rozier’s shape & ability to get into the lane for layups and trips to the foul line was the reason why he shot up draft boards.  Donovan Mitchell has a chance to do the same thing.

Let’s look at the numbers:

Looking at the numbers Rozier played more games, but Mitchell and Rozier played a similar amount of minutes.  Mitchell shot a higher percentage thanks to his elevated 2p%, but was not close to Terry’s production from 3-point range.

It’s important to note that Rozier was incredible on the glass and also getting to the line.  As a freshman Donovan Mitchell’s numbers were better both in per game production and per 40 minutes.

But what stands out overall?  Donovan Mitchell needs to work on playing defense without fouling.  In many cases Donovan Mitchell had a similar or better freshman year than Terry Rozier, but his foul totals are really well out of proportion showing Donovan’s biggest area of improvement.

Rick Pitino has already stated that Mitchell’s defense would be a key emphasis this offseason.  If Mitchell makes those improvements and also makes the same leap in his game that Rozier had as a sophomore Louisville may not see Donovan Mitchell the junior.

It’s also important to note that Rozier was a Prep School player, so his 1st year in college was his 2nd after high school, while Mitchell came to UofL in the traditional way.