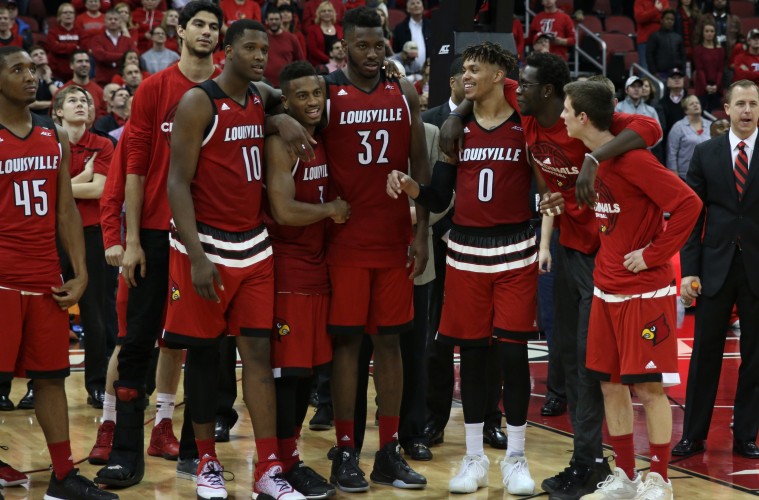 Two University of Louisville men’s basketball players have received all-conference honors for the 2015-16 season in a vote of Atlantic Coast Conference coaches.

Graduate guard Damion Lee was named to the All-ACC third team as selected by the league coaches. Sophomore forward/center Chinanu Onuaku was honored on the ACC All-Defensive team and was an honorable mention All-ACC choice.

Lee led the Cardinals in scoring and is 10th in the ACC, averaging 15.9 points and 1.5 steals (fifth in the ACC) while shooting 84.3 percent from the free throw line (fifth in the ACC).  Lee scoring in double figures in 26 of 30 games this season and was the Cardinals’ top scorer in 16 games.  From Baltimore, Md., Lee scored his 2,000th career point last Wednesday, a figure which includes his season at Drexel.

Onuaku was eighth in the ACC in rebounding (8.5 rpg), third in blocked shots (2.0 bpg) and sixth in offensive rebounds (3.0) while averaging 9.9 points and shooting 62 percent from the field this season.  The Lanham, Md. product had 11 double-doubles on the season and 13 for his career, including six consecutive in his first six ACC games this season.  His 10 double-doubles in ACC games was second in the ACC.

The complete list of the coach-selected honors is listed below.

ACC Freshman of the Year

ACC Coach of the Year

ACC Defensive Player of the Year

ACC Most Improved Co-Players of the Year

Sixth Man of the Year