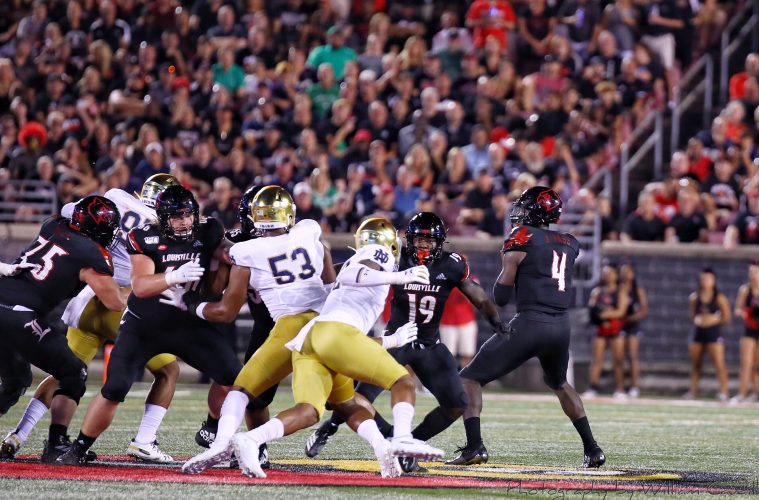 University of Louisville offensive lineman Cole Bentley was named to the Rimington Trophy watch list announced by the Trophy committee on Friday.

Bentley is one of 40 centers overall and one of five from the ACC named to the preseason watch list.

Trophy committee worked with Pro Football Focus (PFF) to narrow down its list to the top 40 centers. PFF grades every player on every play of every game on how well they execute their given assignment. That play-by-play grading allowed the Trophy committee to create a watch list based both on nominations from the school and data provided by PFF.

Bentley has started 31 games in his UofL career, including each of the first 10 games of the 2020 season at center.

The redshirt-senior has helped anchor a Louisville offensive line that paved the way for the third-best rushing attack in the ACC in each of the last two seasons. The Cardinals have averaged more than 200 yards per game on the ground since the start of 2019 and averaged 5.24 yards per carry last season.

The Rimington Trophy is presented annually to the most outstanding center in NCAA Division I
College Football.

While more than a dozen All-America teams are selected annually, the Rimington Trophy committee uses these three prestigious teams to determine a winner:

Because the selectors of these three All-America teams can place centers in a “mix” of offensive linemen that includes guards and tackles, their 11-man first teams can often have two centers.

The Rimington Trophy committee’s policy is to count all players that play primarily the center position for their respective teams as centers, even though they may be listed as guards or tackles on the All- America teams.

Dave Rimington, the award’s namesake, was a consensus first-team All-America center at the University of Nebraska in 1981 and 1982, during which time he became the John Outland Trophy’s only two-time winner as the nation’s finest college interior lineman. For more on the Rimington
Trophy and a list of past recipients, visit www.rimingtontrophy.com.