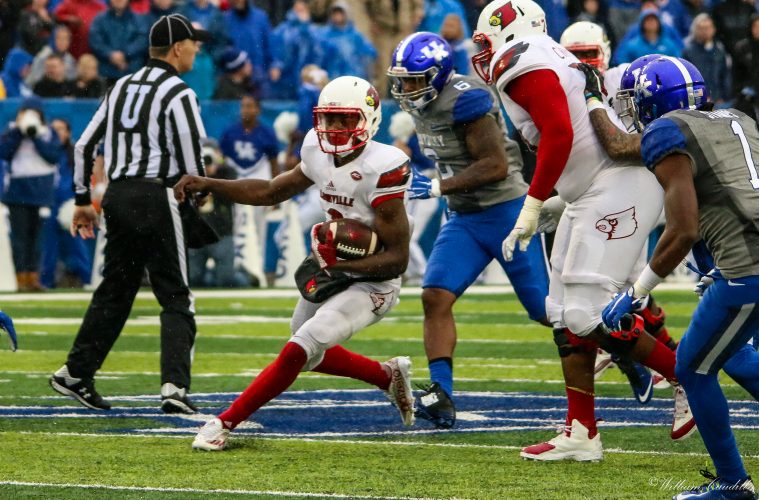 The University of Louisville has accepted a bid to play in the Franklin American Mortgage Music City Bowl against Texas A&M on Dec. 30 at 7 p.m. ET at Nissan Stadium in Nashville, Tenn. The game will be televised by ESPN.

This marks the first appearance for the Cardinals in the Music City Bowl, which dates back to 1998, but the fifth post-season appearance in the state of Tennessee. The Cards played in the Liberty Bowl in Memphis, Tenn., a total of four times.

“The University of Louisville is so excited to be headed to Nashville for the Franklin American Mortgage Music City Bowl,” Vice-President/Athletics Director Tom Jurich said. “We have the opportunity to take our young team to a great bowl game and compete against an outstanding opponent from the SEC in Texas A&M.

“We have heard outstanding things about the hospitality that the teams and fans receive from the people at the Music City Bowl. The real winners though are our fans, who I know are excited to have the opportunity to make the short drive to Nashville and experience what the city and bowl has to offer.”

The Cardinals, who have recorded seven or more wins for the last six seasons, finished the regular season with a 7-5 record, going 5-3 in ACC play for the second-straight season.

Louisville closed the year by winning seven of its last nine games after an 0-3 start. Three of Louisville’s losses came against teams that are ranked in the College Football Playoff Rankings (No. 1 Clemson, No. 9 Florida State and No. 18 Houston.).

The Cardinals will play an opponent from the Southeastern Conference for the second-straight season in postseason play after dropping a 37-14 decision to Georgia in the 2014 Belk Bowl in Charlotte, N.C. Louisville defeated SEC foe Florida 33-23 in the 2013 Sugar Bowl.

Petrino is 2-3 in bowl games at Louisville, including a win in the school’s first BCS appearance in 2007 – a 24-13 win over Wake Forest in the FedEx Orange Bowl. He owns a 4-4 record overall in postseason action.

“We’re excited about the opportunity to represent the ACC in the Franklin American Mortgage Music City Bowl against Texas A&M,” Petrino said. “I think this is a tremendous match-up for us and a great challenge for our football team. I’m happy for our fans that can make the short trip to Nashville and enjoy the bowl festivities.”

Texas A&M, which is making its seventh-consecutive bowl appearance, comes into the game sporting an 8-4 record, 4-4 in conference play, with key wins over Arizona State, Arkansas, and Mississippi State. The Aggies boast the fourth-best offense in the SEC, averaging 423.0 yards and 28.3 points per game. Head coach Kevin Sumlin has led the Aggies to four-straight bowl games and is undefeated in postseason play with the Aggies. This will represent the Aggies seventh consecutive bowl appearance overall.

The Cardinals and Aggies will meet for the fourth time in school history in a series that dates back to 1992. Texas A&M owns a 3-0 series advantage, including a 26-10 win over Louisville in 1994.

Fans immediately can order tickets through Louisville’s Bowl Central, where the online seat selection option will allow you to view real-time availability and select the best seats in the Cardinals’ official fan sections. Lower level tickets are available for just $85 each. No upper level tickets will be assigned from the institutional allotment.

Bowl tickets can also be ordered through the athletic department’s ticket office by calling (502) GO-CARDS or by visiting the location at Papa John’s Cardinal Stadium near Gate 2 on weekdays from 9 a.m. until 5 p.m. ET.

By purchasing tickets from the Louisville Ticket Office, fans can secure the best available lower level seats in the official team section as well as help UofL’s candidacy for elite-level bowl selection in the future. Fans who are unable to attend the bowl game this season can donate bowl tickets to a UofL student, active members of the military, or to a Nashville-area charitable organization.

Many Louisville fans have already secured their bowl tickets as Cardinal Athletic Fund members and season ticket holders were given an opportunity to pre-order tickets in November. All pre-order ticket reservations are assured of receiving tickets and will receive notification on their seat location from the ticket office Dec. 9-11.

Headed to the Music City? Join other Cardinals fans on the official Louisville Bowl Tour presented by Anthony Travel. There are two travel packages being offered to the bowl site.