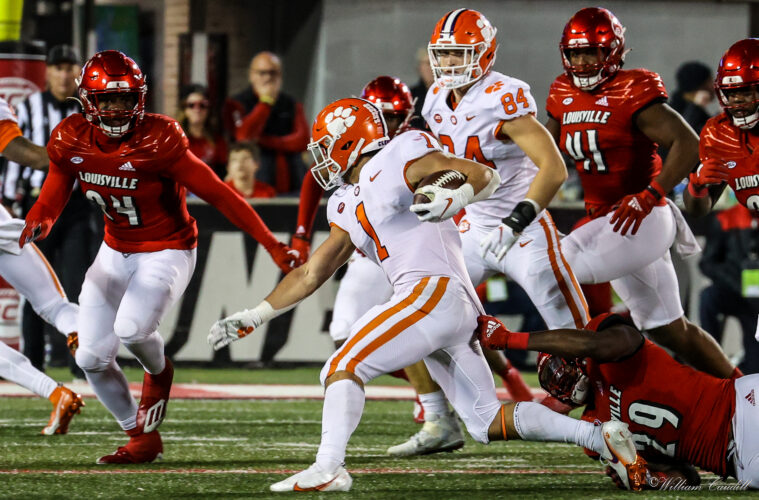 We can do this for just about every football game. If Louisville had scored on its final possession, a Clemson publication might be writing about all the missed opportunities, misaligned plays, drops, etc. That’s football.

But the purpose of this is to A) Highlight where Louisville didn’t execute B) shine light on just how many plays were out there to change the outcome of this game and C) Demonstrate that even though Louisville did lack execution, they were that close to Clemson…. again.

Here are the missed chances for the Cards in its loss to Clemson.

Malik Cunningham has Tyler Harrell well behind the defense. Ball is batted at the line while attempting to throw the route.

Louisville Defensively early in the game had a lot of trouble with the Clemson QB’s ball deception in the run game. Defense chose incorrectly who had the ball on the exchange throughout the 1st half.

Bryan Hudson’s snap is to the left of Malik Cunningham, Malik can’t reach Cooley for the handoff, Cunningham slips… 6 yard loss brings 3rd & 11. 3rd & 11 pass is off Marshon Ford’s hands along the sideline. Possession over.

Malik Cunningham has super clean pocket but takes off after not finding anyone open. 4th down. Cards have to settle for FG.

DJ Uiagalelei was spread wide at WR and Taisun Phommachanh was at QB. Simple read option to the right went for 26 to the 39.

Same possession 7:55 on the clock. a very late flag thrown on Greedy Vance as the Cards were sacking Phommachanh to get to 4th & 13… instead it is a new set of downs for Clemson. Clemson gets into FG position as a result and hits the 38-yarder.

Malik Cunningham is flushed out of the pocket and throws the ball in the direction of Isaac Martin with a defender on him. He’s called for intentional grounding. It’s a loss of 15 and well out of field goal position. Cards punt.

CJ Avery and Jack Fagot got split and DJ hit Beaux Collins for a 1st down that moved the chains. Avery needs to be tighter there to close the gap. Way too easy. Ball to the 36.

The very next play is to Collins again from DJ for another 1st down. This time it was Dorian Jones who gave up too much space for Collins to work with.

DJ Uiagalelei threw a pass behind Beaux Collins and Chandler Jones had it in his lap. He dropped it.

The next play DJ hit Justyn Ross for 27 yards down to the 23. Greedy Vance and Kendrick Duncan provided way too much cushion in zone.

Simple draw play gains 7, Jack Fagot is ejected for targeting. 8-yards added on for the penalty (half the distance).

After a Malik Cunningham score, Louisville gave up a 75-yard Kickoff return to Will Shipley. Clemson started its drive on the 18-yard line. Louisville did get a goal line stop and no points were scored, but they were looking for 99.5-yard drive after regaining possession.

Really this isn’t one play. But the entire series is critical. The Cards got off the goal line with a tight throw to Jordan Watkins and a run to Trevion Cooley.

A penalty on 3rd & 1, false start by Adonis Boone, moved the Cards back 5 yards… but the Cards converted on a 3rd & 6 run by Cooley.

On 2nd Down, 6:56 to go from the 19. Malik Cunningham hit Tyler Harrell for 57-yards. But a Amari Huggins-Bruce block in the back brought the play back to the Louisville 40 instead of the Cards having the ball at the Clemson 24. Effectively a 36-yard penalty.

I disagree with the call. I don’t think the contact affected the play. But….Huggins-Bruce did put his hands on the back of the defender briefly as he was attempting the tackle. Didn’t need any of it.

1st & 10, 5:16 to go in the 3rd quarter. Ball on the Clemson 43. Malik Cunningham picks up 8 yards, but slips and hurts his ankle. He’ll miss two series. But the Cards have 2nd & 2 in scoring position when Evan Conley comes in.

Louisville did get a 1st down with Trevion Cooley, but found itself at 3rd & 11 and could not complete a screen pass to Jordan Watkins.

James Turner came on the field for a FG and missed badly left.

An abrupt 3 & out. Conley was lucky to not have thrown an INT. 36 second drive. Louisville punt, Clemson gets ball at 43 yard line.

22- yard run for Will Shipley. Defense did not fit this run at all. No containment, didn’t see the QB give the ball.

Uiagalelei connected again to Beaux Collins. This time for 21 yards mvoing the ball to the Louisville 18.

It was a 3 man rush with a spy on the running back. DJ had all the time he’d ever need. There was no pressure and eventually Collins got open for the big play and the 1st down.

The play also put Clemson in FG range. They would gain only 2 more yards on the possession (after a TD review for Clemson’s Dacari Collins) and make a 34 yard field goal so make the score 24-20.

Cunningham is back in and the Cards went 3 and out. On 3rd & 3, Cunningham took an 11-yard sack. Nothing was open. A very short punt by Mark Vassett set up Clemson at the Clemson 43.

Taisun Phommachanh tried to connect in the area of Justyn Ross. The ball is overthrown, but Greedy Vance got into the chest of Ross and the ball landed in bounds. Vance might have been able to intercept if not for the contact. Tough play to give up a new set of downs.

DJ went back to Ross, Ross caught the ball over some softish coverage from Greedy Vance. Vance did close to make contact short of the first down, but Ross was able to fight through the tackle to get the 1st down. Needed that one.

Louisville got back to another 3rd down on this drive. DJ Uiagalelei with a straight power run from the shot gun. Dorian Jones was being blocked as he made the tackle, Avery was over too late to help. 1st down. Needed that one.

This is an infuriating play.

At the snap, Marvin Dallas turns his back to the play and Mason Reiger crashed down the line. Clemson only needed to block CJ Avery for DJ Uiagalelei to limp 8 yards into the endzone.

That could not ever be the play call. If Marvin Dallas stays in, that play goes no where.

Another abrupt end of possession.

2nd Down & 6 – Malik Cunningham rushed for 1 yard. Never was able to cut the ball up the field to get more.

3rd Down & 5-Marshon Ford dropped a catch at the 42. Would be a tough catch, did not keep the ball to the ground and the ground knocked it out.

4th DOWN & 5 – I disagree with going for it on 4th down in this scenario. Clemson was immediately in field goal position. There was 2:40 remaining, Louisville had 3 timeouts.

Clemson went 3 and out on the ensuing possession and did hit a field goal to push the margin to 6 (the final margin).

Malik Cunningham finds Jalen Mitchell and some room to run (an unlikely score) but possible 1st down….. but Mitchell dropped the pass.

Malik Cunningham scrambles for what appears to be a 1st down. A horrendous spot makes it 4th down. But UofL would go on to convert 4th down with a tremendous play from Justin Marshall (another play that ACC officials couldn’t get correct live, because they are the most inept in college football).

Jalen Mitchell rush to the left for no gain. The play was made by #47 for Clemson. He came through and Caleb Chandler was late getting out of his stance forcing Mitchell out wider and allowed other Clemson tacklers to make the tackle.

Out of the pistol formation this is a straight QB run for Louisville. Two tight ends on the side of Malik and a running back behind him. This is a play Louisville would have been better to have a quick pass to the boundary, Clemson left that area open entirely. #47 made the play again.

Louisville lost 3 on the play.

This play had more push, but it did go to the boundary side and Jalen Mitchell found himself trying to block 4-5 Clemson defenders on his own. It looked like Marshon Ford was surprised that it was a QB run because he turned to catch the ball, but UofL & Malik could have used him as a blocker. Gain of 3.

Louisville went quick here. It was a rollout pass play. There was nothing there and as Malik was cutting up the field he slipped and fell.