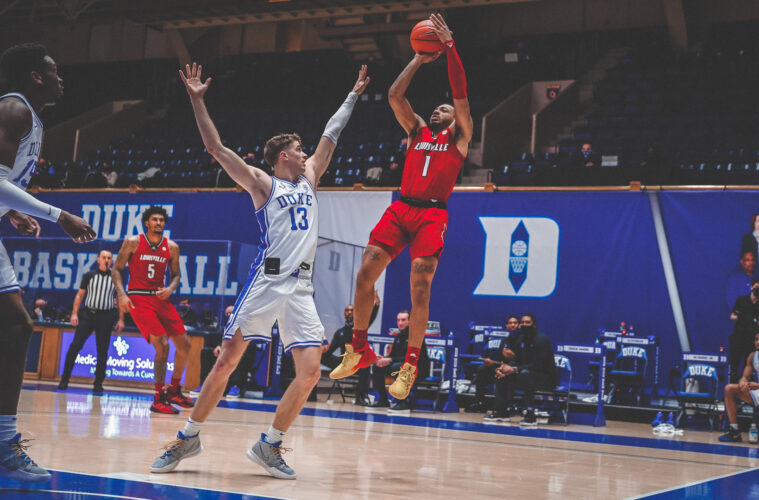 Louisville’s Carlik Jones was incredible tonight finishing with 25 points, 6 rebounds, 4 assists, 2 steals and did it with his team on his back late in the game and into overtime at Cameron Indoor Stadium.

Chris Mack’s Cards needed overtime after a 12-point second half lead was dwindled away as UofL hit a wall once the news that senior Center Malik Williams would not return to the game as he reaggravated his foot injury that held him out for nearly all of the 2020-2021 season. Then Duke put on the full court press…. not to mention the Blue Devils’ Matthew Hurt scoring 37 points on 15-21 shooting before fouling out.

But it was Carlik Jones’ night on the national 6:00 p.m. ESPN state on the road at Cameron. When UofL needed a play Jones was there to make it. But he did have help. Samuell Williamson was the energizer bunny vs. Duke and brought more hustle than his 14 point 12 rebound performance indicates. Jae’Lyn Withers had 16 points and 9 rebounds and pulled down his most important rebound of the game after a Jones’ FT was missed to secure overtime for Louisville.

While Carlik will steal the headlines tonight, this was a team effort. David Johnson, Quinn Slazinski, JJ Traynor and Dre Davis all contributed massively as Chris Mack elected to play only 8 players versus the Blue Devils. Even Malik Williams had 5 points and 5 rebounds before being shutdown.

Louisville had just 5 turnovers at halftime and allowed 0 offensive rebounds in the 1st half. The press did bother Louisville in the 2nd half and we can argue about whether or not Chris Mack should have called a timeout with 7 seconds left in regulation with Jae’Lyn Withers rebounding the Carlik Jones miss. This wasn’t a perfect game…. but it was a huge win for this team.

Going into this game Louisville was 48th in the Net, 47th in the Ken Pom and it will be interesting to see how the analytics change with a road Q1 win over Duke. The Cards were also a team on the right side of the bubble and while that’s still not completely out of the woods it moves the needle further over to the right side for UofL.

And the officials……… mother of god.

It was a big night for Louisville Basketball. Chris Mack is now 3-1 vs. Duke while at Louisville.