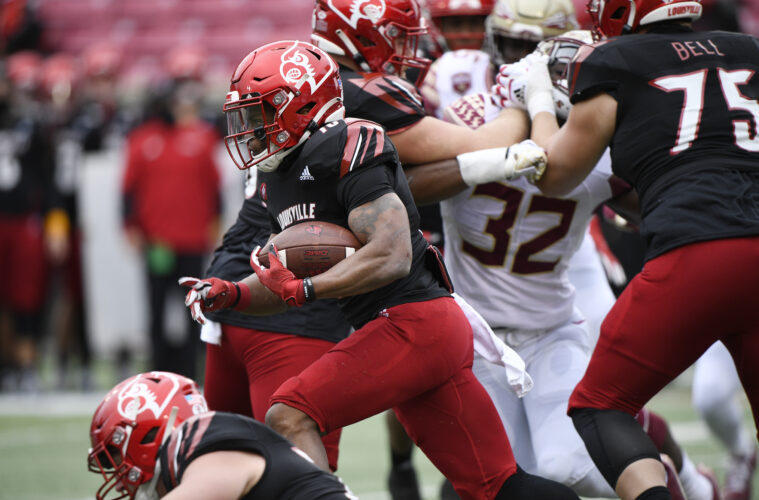 Louisville Football looked like the team we thought they could be in 2020 on Saturday in a 48-16 trouncing of the Florida State Seminoles. Let talk about some of the themes of the game.

Louisville opened the game with a frustrating opening series defensively. After a kickoff out of bounds there were 3 really bad examples of tackling on the opening drive. Finally the drive for Florida State was culminated by a Jordan Travis fumble touchdown run…… Louisville was there to make the play and didn’t and Travis was able to run into the endzone.

Not a good start.

The bad opening possession notwithstanding Louisville Football just poured it on. It started with a critical 66-yard play from Malik Cunningham to Tutu Atwell that set up the Cards’ 1st TD of the game.

After a 3 AND OUT from FSU Javian Hawkins went for 70 yards for a TD and got a big block from Malik Cunningham (one that he didn’t get a week prior vs. Notre Dame on play #1 vs. the Irish). From there the Cards poured it on.

Javian Hawkins finished with 16 carries for 174 yards and 3 Touchdowns!

Tutu Atwell had just 3 catches for 129 yards and a TD. But a lot of other pass catchers got involved today, big plays from Marshon Ford (including a dropped TD).

Leaving Georgia Tech the entire program was frustrated and much of the program was ‘encouraged’ by the defensive performance in South Bend allowing just 12 points. Versus Florida State Saturday despite the tough start Louisville really locked in and made just about everything difficult for Florida State and former Louisville Quarterback Jordan Travis.

The Cards allowed just 14 points on the day (2 point safety came after a goal line stand) and at this point maybe the Louisville Football defense has started to find its groove. The tackling still isn’t perfect, and really there is a lot to clean up…. but it’s working for the Cards.

The Louisville DBs had a ton of chances at INTs today. Jack Fagot ended up with the only takeaway of the game but there were GIFTS out there for the Louisville defense. Russ Yeast, Lovie Jenkins, Kei’Trel Clark and a team miss left a bunch of INTs from Jordan Travis and Chubba Purdy today. Let’s bring those interceptions down!

But the bright side is the the Cards are there to make plays and breaking up 12 passes in a single game is a big deal.

Chubba Purdy saw his first collegiate action and went 0 for 9. Should have thrown 2 INTs….. but… that’s poetic.

Louisville has struggled giving up TFLs for the past few seasons and especially in 2020. The Cards only gave up 5 on Saturday. That’s tremendous progress against a defensive front with some serious individual talent. If the Cards can stay on schedule they can fire offensively in more games like they did today. Big time improvement.

It Wasn’t Perfect – 14 points left on the field

Louisville still left some points out there today. It wasn’t a perfect performance by any stretch of the imagination but it was enough to win by 32 points against a program that Louisville recruits against in its division.