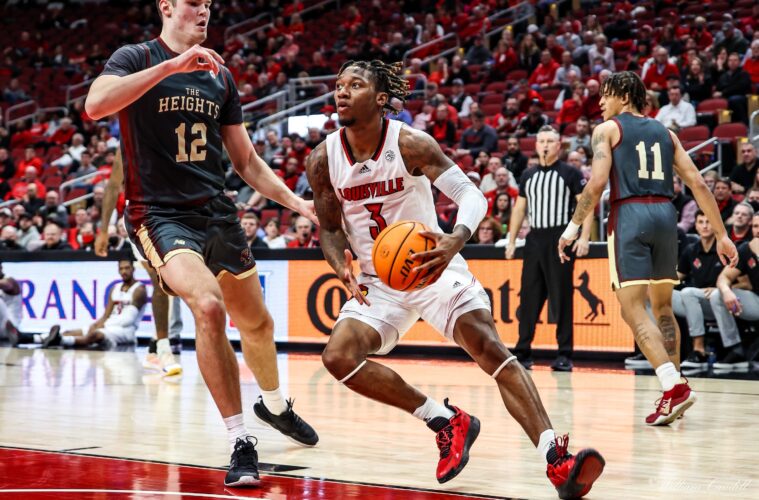 Cards Set To Take On Boston College TONIGHT at 9:00

The Cardinals lost their eighth straight game last week with a 75-54 loss to Pitt. Boston College snapped a four-game slide Saturday with an 84-72 victory at Notre Dame.

Louisville is 10-4 all-time against Boston College, including 4-2 on the road. The Cardinals have won nine of the last 10 meetings in the series and three straight.

• On Thursday, Louisville added freshman forward/center Emmanuel Okorafor to the roster. Okorafor is a 6-foot-9 native of Lagos, Nigeria, and is eligible immediately after arriving from NBA Academy Africa.

• Over the last five games since turning the calendar to 2023, redshirt freshman guard/forward Mike James is averaging 14.6 points and 3.4 rebounds while shooting 43% from the field and 46% from the 3-point line. In the first 14 games of the season, James averaged just 6.9 points while shooting 44% overall and 31% from 3-point range.

• Over the last 10 games, senior guard El Ellis has averaged 19.8 points, 5.8 assists, 2.8 rebounds and 1.9 steals. As of Sunday, Ellis was one of 20 players in the nation with at least 330 points and 85 assists this season. After having a positive or even assist-to-turnover ratio just three times in the first nine games of the season, Ellis has been positive or even in eight of the last 10 games. Ellis’ current 17.7 points per game overall is the seventh-most by a Cardinal in the last 30 seasons.

• El Ellis had 20 total steals in his first 45 games as a Cardinal – including all of last season and the first 13 games of this year – for an average of 0.4 per game. He now has 14 steals in Louisville’s last six games, an average of 2.3 per game, and has at least one steal in 10 straight contests.

• After averaging 1.7 points and 3.6 rebounds across the first nine games, senior forward Sydney Curry is averaging 8.7 points and 6.6 rebounds over the last 10 games while shooting 58% overall. His career-high 19 rebounds against Florida A&M were the most by a Cardinal since Luke Whitehead grabbed 19 boards against Marquette on Jan. 31, 2004.

• Sophomore forward Brandon Huntley-Hatfield missed the last two games with a foot injury. He leads the team with 6.0 rebounds per game and is averaging 7.5 points per contest.

• One of the Cardinals’ strengths as a team has been getting to the free-throw line. Louisville has shot at least 20 free throws in eight of the last 10 games and over that span has shot 40 more total free throws than its opponents.

The Atlantic Coast Conference game started 75 minutes late as workers repaired a leak in the north end of Louisville’s KFC Yum! Center arena. Both teams then started cold from the field after the delayed tipoff, combining to make just 7 of their first 23 and 4 of 12 from the foul line.

Louisville eventually warmed up to lead 30-28 at the break thanks to Withers, a former starter who came off the bench to make his first three attempts and finish 4 of 6 from the field with eight rebounds.

Curry, who missed the previous loss at Pittsburgh with an ankle injury, and Locke took it from there soon after halftime. They made consecutive three-point plays for a 44-37 lead and Louisville finally reached double digits on Withers’ jumper with 4:45 remaining.

Makai Ashton-Langford scored 22 points for the Eagles, who were coming off an historic comeback win at Clemson. BC stayed within single digits much of the game but shot just 29% and couldn’t get closer than eight after the break. The Eagles edged Louisville 43-42 on the boards.